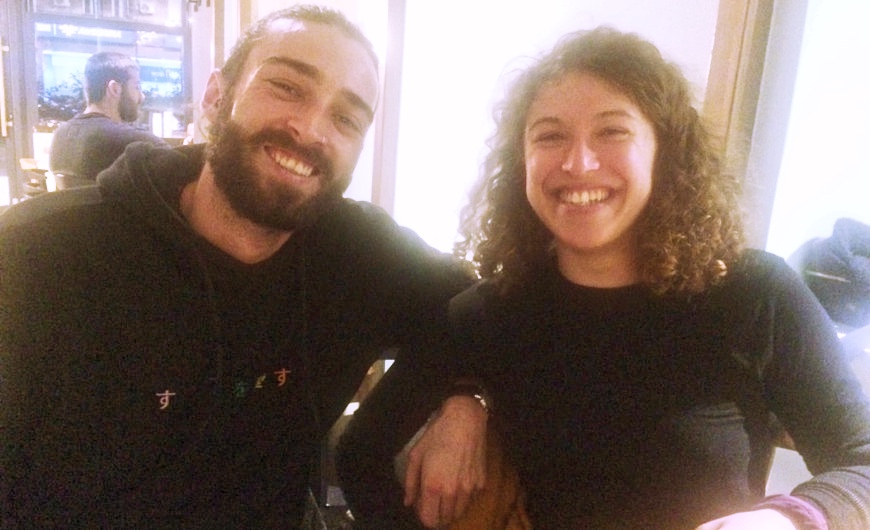 We organized a quick Q&A with young couple from a small town near Amsterdam, who was in Belgrade on a short sightseeing trip.

Actually, Isabella is from Rome, Italy, and Baptiste, her travelling friend, is from Bayonne, France. They had a couple of days off, and decided to see something new. They found cheap flight and came to Belgrade for a few days.

Q: Did you know something about Belgrade before you came here?
Isabella: I knew a bit of a former Yugoslavia history, but nothing in specific about Belgrade.

Baptiste: No, not at all, and that's exactly why I decided to come here. I wanted to learn something about your country.

Q: What did you expect to find here?
Isabella: I didn't have many expectations, but some friends told me that they were here during the summer and it was really nice for them, they had great time. They mentioned that there are a lot of nice bars, for example, but also that I would have to look for my own and explore the city.

Baptiste: I did not expect anything, because when I travel to a new country I want to be surprised.

Q: What is the first thing you've noticed in Belgrade?
Isabella: Hmmm... well, I think the first thing you see is a kind of an architectural contrast beween the buildings in the city. There are a lot of buildings that are modern, but like old fashion modern, from the 1970's or something like that, painted gray and not really renovated. You see a lot of tall buildings when you enter the town. And we came during the winter, you see a lot of snow. And I think it's that kind of a city that you have to discover little by little, because at first you cannot really understand what the city is like.

Baptiste: Ok, the first thing that I noticed when I arrived was how the people were staring at me. I guess because of my long hair and my nose piercing. People were really staring at me, so that's my first impression.
Isabella: (smiling) Yes, it is true, I also noticed that. Especially one man, a bit old, really staring. 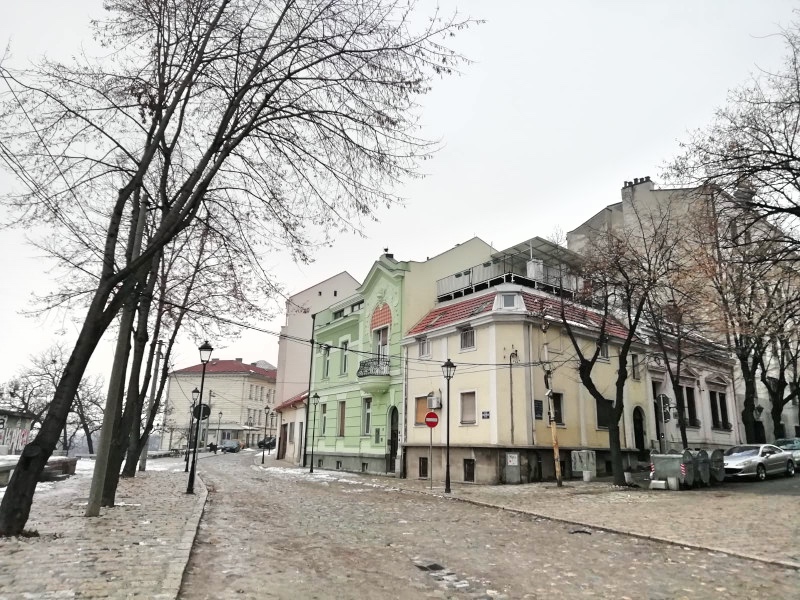 Q: Describe Belgrade in one emotion (describe the emotion, if Belgrade was a feeling, what it would be?).
Isabella: That's weird. At times I felt like I was back home in Italy, because there were many similarities, and it was a kind of sensation that I was in Italy but back in time, twenty or ten years ago. For example, ten years ago in Italy you were alowed to smoke indoors and there was more traffic, it is similar from many aspects. The people are nice and friendly for most of the time, the food is really good, everybody likes music. The inside places are quite similar, you have small bars, and some very simple places where you can feel nice and comfortable. People talking to each other, smoking and drinking, together, like in Italy. I didn't have some striking emotion, I felt relaxed here. And it was surprising for me because I didn't expect such similarities.

Baptiste: I am not sure it's emotion, but it is kind of a feeling of antiquity, I got an old vibe from the city, and I really liked that.

Q: What you dislike about Belgrade?
Isabella: I dislike the traffic, the air pollution, and the noise from the traffic.

Q: Compare Belgrade to your native city. What are the advantages/disadvantages?
Isabella: My native city is Rome. It is way bigger. There are some similarities in traffic and movement, in public transport also. I don't think I can find some advantages or disanvantages in comparison to Rome, it doesn't really make sense to compare these two cities, I can only say what I think that would be advantages and disadvantages in general. As a person who uses Euro as currency, I think that's an advantage because of the difference in money value and it is an advantage to have more economic power than the local people. Disadvantages are, first of all, moving around the city it is not so easy, you need a car, because with public transport it takes time. The food is beautiful, and I also get the feeling that the nightlife is great. For me, disadvantage would be that I don't know the language so I would have to learn it. And I cannot read cyrilic script, so I would need to learn that.

Baptiste: I am from a really small village in France and Belgrade is the capital. It is not comparable.

Q: What do you think about people in Belgrade?
Isabella: We haven't stayed here long enough to say that we have an impression of the people. But I am speaking of the people that we met, Vladimir, for example, who is very kind, educated, respectful, and in general I got an the impression that the people here are very respectful, they will help you if you ask them for a direction or something, they are easygoing, but I think also that there is a very big difference between the older generation and the younger generation. you can see that the old generation is much closer to Russian tradition, and the new generation is like no way, we are Serbian. I know this one word in Russian thank you, "spasibo", and I see the difference in reaction from the old people and the younger ones. The elders are really happy and start speaking in Russian to me even though I do not understand anything, and the younger people are saying no, here we say "hvala". That is a big difference, and you can really see how the country is thinking, it is quite nice and interesting.

Baptiste: We haven't spent enough time here to have proper impression about the people, but every single time we asked someone for help, direction or something else, or when we went shopping, the people had huge smile and really, really wanted to help. And they are very good in English, I think.

Q: Could you live in Belgrade?
Isabella: Yes, I could, and I would like, maybe, to learn the language because I like learning languages. But not for a long time, maybe for a couple of months and I think that would be enough.

Baptiste: I have problems to stay in a country for more than three years. So I would like to live in Belgrade, but my limit would be two years maximum. Then I would need to run away again.

Q: Name one city anywhere in the world you think is similar to Belgrade (no matter if you have visited it or not, give us your impression).
Isabella: That's a difficult question. I think there are some similarities with citties I visited in Lithuania, like Kaunas and Vilnius, where you also get that sensation of the old times, and there are also many tall, grey buildings in, how to say, a kind of Russian style. Those are the similarities I could say with Kaunas. Other similarities are like how the streets are made with some Italian streets, but I could not mention a particular city that I could say oh it is similar to Belgrade, because each one has its own style.

Baptiste: I don't think that there is a similar city that I can associate to Belgrade, but I would say that the countryside of Hungary could be, from far away, similar to Belgrade, or some very small cities in Turkey make me feel like Belgrade, in the sense of architecture and how the life is going there.

Isabella: Maybe because of the Ottoman style. 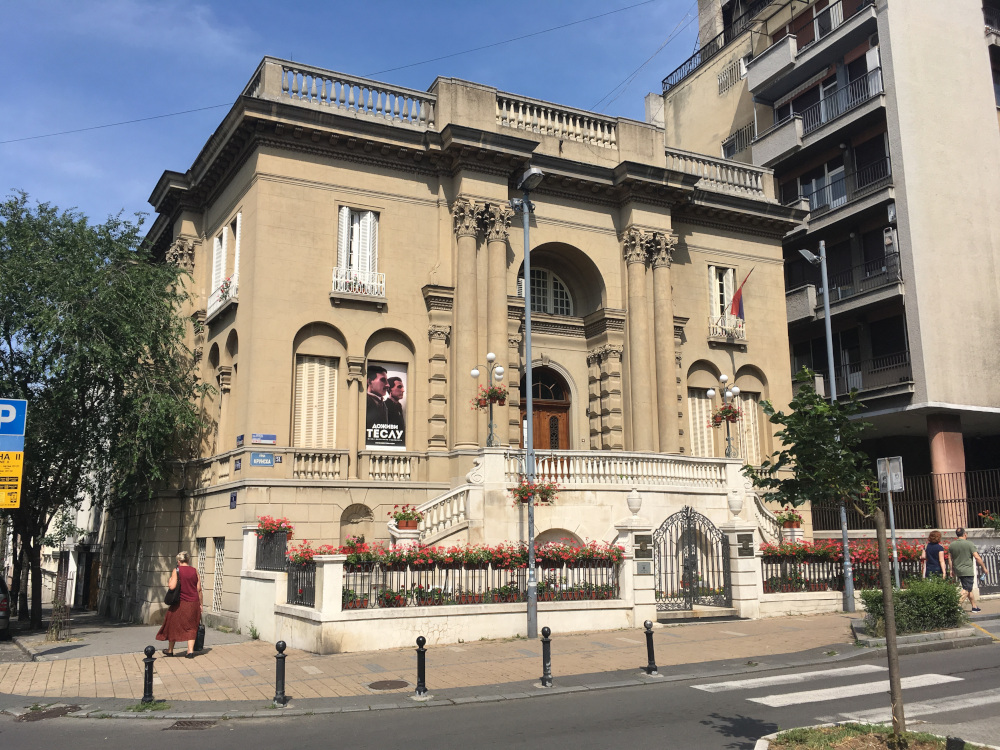 Q: What was your most memorable moment in Belgrade?
Isabella: Well, I hope it's gonna be tonight, because it is our last day here and I hope we will meet a lot of people, drink together and have fun.

Baptiste: Yeah, I expect a lot of this evening. For now, my most memorable moment is Tesla Museum, and that was one of the main reasons I decided to come to Belgrade, to learn about Tesla who made the world as it is right now.

Isabella: You guys are really lucky to have Tesla Museum, it is really nice, and it's on the map, visible, it attracts tourists. Because there are not too many people who know about him.

Q: Would you return to Belgrade (express that probability on a scale from 1 to 10).
Isabella: Yes, but I want to go back in summer, because I think the city looks different in summer, you can be a bit more on the riverside, and maybe there are festivals and so. Yes, I would return in summer. So, if it is summer I would say 10, if it is winter then... maybe 6.

Baptiste: Yes, I would like to come back. In winter if it is a bit colder, this is exactly the temperature that I don't like, I like really cold or really warm. And during summer I would like to return, because you have the Danube and the Sava and I think that you can really enjoy by the rivers. I will not say 0, because I don't like 10s, but a solid 9 for sure.