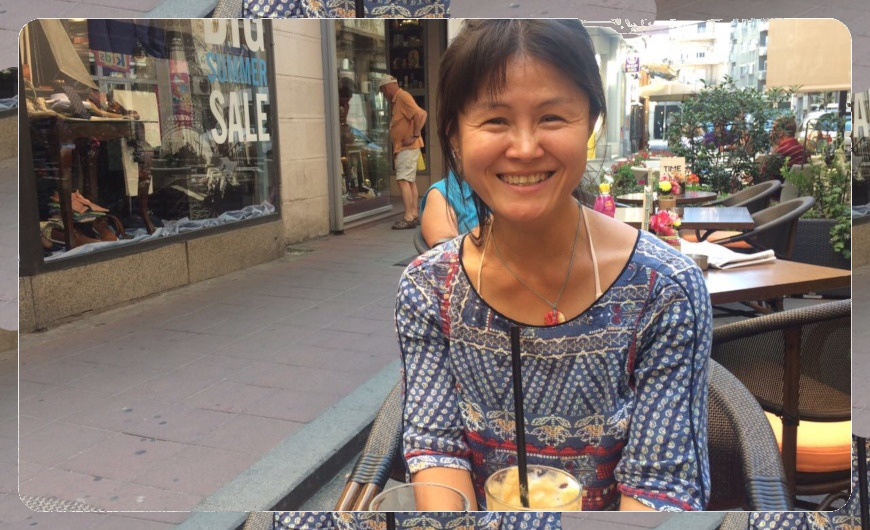 We had a cup of coffee with Meeyoung in one of Belgrade's bars. She gave us an interesting insight on her travels, on her native Korea, and told us her impressions about Belgrade.

Meeyoung Kim is a theater actress from Seoul, Korea. She is usually involved with Korean historical plays, and her performance include traditional singing and dancing. This multitalented actress is in love with her country, like we are with Belgrade and Serbia, apparently, she concluded from this thing that we do. She loves reading, walking around, and cooking. She loves dancing and listening to music. Meeyoung swims and practices yoga every morning. She likes to drink, as most Koreans do, we've found out, especially when meeting with friends and having a nice chat, often including a tasty meal.

She travelled all around the world. She has been to Canada, Japan, three times she visited Australia. Of course, she has been to Europe. "Two times I was in France", she emphasized. But she was not all the time a regular tourist. She performed on her trips, in England and Japan.

She left Seoul two months prior to our pleasant conversation we had in the center of Belgrade mid-August. When she came to Europe, first she landed in London, where she met with the friend, also actress. She got to see the theater where her girlfriend does most of her acting in the UK, and it was very cool, she stated. Then they went together to Seville, Spain, along with Meeyoung's nephew and niece, who wanted to learn Spanish, proper in Spain. And her nephew, who is only 17, quit school this year, we've found out. Why? It is pretty simple, he doesn't like school. That made us laugh. But Meeyoung thinks that's not ture, she says that's just a phase and the kid probably needs experience, to see new countries and meet new people, before he realizes in the end that it would be better for him to complete his official education.

"After Seville, my niece had to go back to school, and I continued to travel with my nephew", Meeyoung told us. "We went to Portugal, and visited some other parts of Spain, as well. Then we moved to Italy, we visited Slovenia, and it was great", she said smiling. But for her it was very intense to travel with the kid, so she had to send him back to Korea. "So, I went to Hungary, alone, and stayed with my host in a small village winery. I was there for two weeks and I learned great many things about Hungarian culture. We talked a lot every night, enjoying the wine. Sometimes we would be off to a music concert or dancing. I have spent wonderful time there", she related, nostalgic, with glow in her eyes. And then... "Well, suddenly, I am here in Belgrade. Not sure why, though", she said thoughtfully.

We learned that Serbia is not very well known among Koreans, they even do not know where to look it on the map. The only thing they heard about was the war and they associated it with Belgrade. "You know, like when you think of Paris, you think of romance and all that. Budapest, on the other hand, has great night view. But when you hear about Belgrade, only war crosses your mind", she explained. Because of all that, before she came here she thought that Serbian people would probably be somewhat troubled, or complicated.

Despite her ominous expectations, she realized that the people in Belgrade are actually very kind, but not so energetic, though. In comparison to other places, like London, for example, people here are warm-hearted, and friendly, she told us joyfully.

"The city itself is not so modern, in terms of architectural style", she noticed. She felt some similar emotions when she was in Kazakhstan, strangely enough. And then she explained that it is due to a fact that all over the place she sees people with black hair, blond hair, pale, or with darker skin, and all of them belong to the same nation, they are all Serbs. So this physical diversity is something that would be very strange in Korea, and actually it is very strange for Korean people who witness it abroad. The buildings, however, are fairly big, like in Italy, or in Paris, she told us, and pretty old as well, but there was something different that she struggled to define. "My impression is that the buildings here are naturally old, let's say, but not so valuable in terms of architectural significance", she concluded.

In comparison to Belgrade, Seoul is a very busy city, she informed us. "My country is small, but there are so many people linving there, so many cars!", she sighed, like it was something that is posing quite an inconvenice. I googled it, immediately, and I found that that there are slightly more than 50 million people living in Korea, country which is a bit bigger than Serbia. And Serbia has only 7 million people. Imagine, the city of Seoul itself, which is the capital of Korea, has a population of 10 million people!

"The city of Seoul is a very modern city, with large modern buildings", she said. And she is against it. Like we heard from Geraldine from the Philippines, apparently, the same thing is happening all over southeastern Asia. They do not bother to preserve their traditional architecture. They just destory it and build new contemporary high-rise buildings. Because of that, she appreciates our care for tradition, and preservation of city's identity.

"I like it better here", she concluded our chat.