Some of the main and the most emblematic Belgrade landmarks and places are listed in this section. Find out more about the things to see in Belgrade.

Cathedral ("Temple", as the Serbs call it) of Saint Sava is one of the 5 largest orthodox churches in the world, and the largest one in the Balkans (South-Eastern Europe). The basis of the church is 91x81 meters and it is about 70 meters high. It is the symbol of Serbian essence, pride, tradition, and freedom... read more

Belgrade Fortress is situated on the hill, overlooking the confluence of the river Sava into the Danube. It started as a Roman military camp in the early 1st century AD, growing into a simple fortification, and over the time into a true and powerful fortress. Until present day it remained within the boundaries of the old town and city's center... read more

Today's monumental five-domed church, placed in Belgrade's central park - Tašmajdan, was being built from 1931 to 1939, in Serbo-Byzantine style of architecture, after monastery Gračanica (built by Serbian king Milutin in 1321)... read more

Formerly known as the "Theater square", after the magnificent building of the National Theater which was built in 1869 when the whole place began to get its shape, Trg Republike (Republic square) is, together with Terazije square, the principal spot in the center of the city... read more

Terazije street (or square) is the ground zero, the central point of the city. The main landmark of Terazije is the "Terazije fountain", built in 1860, located between two architectural jewels of the city - Hotel Moskva (eng. Hotel Moscow), built in style of the Russian secession in 1908, and Hotel Balkan... read more 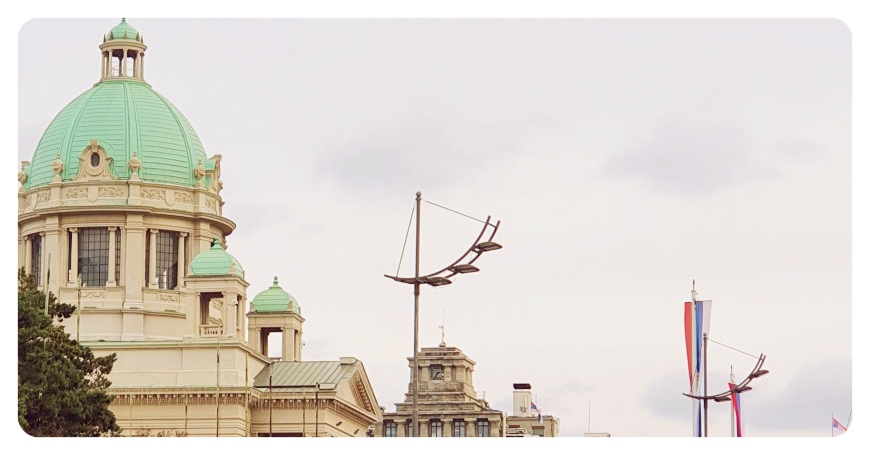 Pioneers park, located in the very heart of the city, is a truly unique place. Between two world wars, it formed part of the royal complex, together with the royal garden... read more

The reconstructed Savski square with the grand monument to Stefan Nemanja caused a lot of reactions and controversy. Prior to the extensive works carried out on the complete redevelopment of this semicircular space (or semi-elliptical, more precisely), Savski square was a large and busy crossroad... read more

Cvetni Trg (eng. "Flower Square") started as a small park in the late 19th century, which grew into an open market. With creation of the Society for Vračar Embellishment, nice looking buildings start to grew marking its borders. This is the place with lots of coffee shops, and it is especially beautiful in springtime and summer. At the Flower square you can see a remarkable two-centuries-old oak tree, located in front of the supermarket, the only one that survived from the old woodland... read more

Kosančićev Venac is a very beautiful district in historical part of Belgrade, beneath Belgrade Fortress, overlooking river Sava. Recognizable by cobblestone streets and charming vintage atmosphere, this is maybe the nicest neighborghood in the city. It was named after Serbian hero Ivan Kosančić who died during the Battle of Kosovo in 1389... read more

This is the oldest urban city square in Belgrade, with one of the most classical surroundings in the center of city. It is also an academic hotspot. There is a cosy Students' Park in the middle of it, also known as the University park, in the shape of a public garden... read more

Topličin Venac is a beautiful small district in the heart of the old town, close to Knez Mihailova pedestrian zone. It mainly consists of a square with Vojvoda Vuk's Park in the center. It is shaped by some of the classiest buildings in the historical center of the city... read more

This is a cobblestone pedestrian zone with lots of traditional Serbian restaurants (ser. "Kafana"), but also there are a couple of art galleries, of which "Djura Jakšić House", where Serbia`s famous paintor and poet lived, with his monument in front, at the sidewalk, is the most important one. Skadarlija is considered to be Belgrade`s Monmartre, as in the late 19th and early 20th century it was populated by actors and all kinds of various artists, such as poets and painters... read more

Gospodar Jevremova street (eng. "Lord Jevrem's street") bears the name of Prince Miloš's father, one of the most educated people of the time and the first commander of liberated city of Belgrade. It goes for about 700 meters, in Dorćol neighborhood, connecting Belgrade Fortress with Skadarlija bohemian district and its principal Skadarska street. This street is very old, it dates back to 17th century. It is very beautiful, but the majority of the houses are in state of decay... read more

Zeleni Venac is a small district in the center of the city, located on the principal way to Branko's Bridge and New Belgrade. It is well known for its open market (called "Zeleni Venac market"), and bus station for internal transport in the city, lines that are going direction New Belgrade and Zemun... read more

Obilićev Venac street forms a continuous pedestrian zone in the center of the city with Knez Mihailova street. This is a fairly small street, only a couple of hundred meters long, but it is quite nice if you want to divert for a little while from crowded Knez Mihailova street and have a cup of coffee in one of many cosy bars and restaurants... read more

Knez Mihailova street is a famous pedestrian zone in the very center of Belgrade. Throughout the history this road represented the heart of urban life in the city... read more

Kralja Milana (eng. "King Milan street") is one of the central avenues in Belgrade. It goes on from Terazije Square to Slavija Square, for about 1 kilometer. Many of the important buildings are located in this street, for example the Old Palace (now Belgrade City Hall), the New Palace (now Presidential Palace), and the Yugoslav Drama Theater... read more 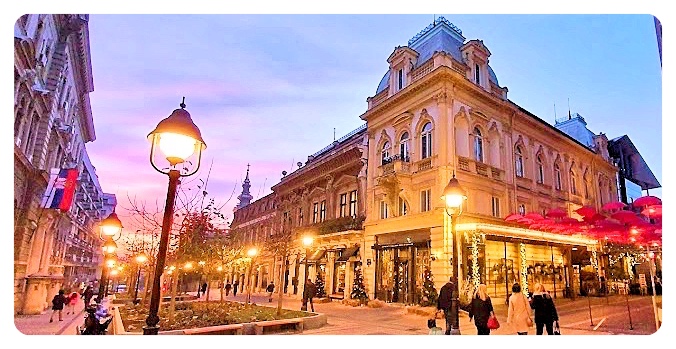 King Peter's street (ser. "Ulica Kralja Petra") is possibly the most beautiful street in Belgrade. It goes from the building of the Patriarchate, in Kosančićev Venac neighborhood, crosses Knez Mihailova street, and continues further on all the way to Emperor Dušan street. It is very long and narrow, and it is connecting two historical districts, Savamala with Dorćol... read more

Bulevar Kralja Aleksandra (King Aleksander blvd) is the longest street in Belgrade, and one of the longest European avenues, with cca. 8 kilometers of length. It is commonly reffered to as "Bulevar" (eng "Boulevard") among ordinary people... read more

One of the main points of traffic in Belgrade is located at Slavija square roundabout. From this spot there are roads virtually in every direction of the city's urban area. It is on the principal way and a couple of minutes walking distance to Vračar Plateau with St. Sava's Church and the National Library... read more

Krunska (Crown) street is located in the city center, Vračar district. It goes on for 1.5 kilometers, in parallel with King Alexander blvd. Tesla Museum is here, at no. 51... read more

Kneza Miloša street is a large avenue that connects city center with the highway. It goes for about 1.5 kilometers, from the National Assembly to Mostar interchange... read more

Andrićev Venac is a semi-pedestrian street in the center of Belgrade. It consists of two parts, in total about 200 meters long. The New Palace (now Presidential Palace) is located at no. 1, and this is the head office of the President of the Republic of Serbia... read more 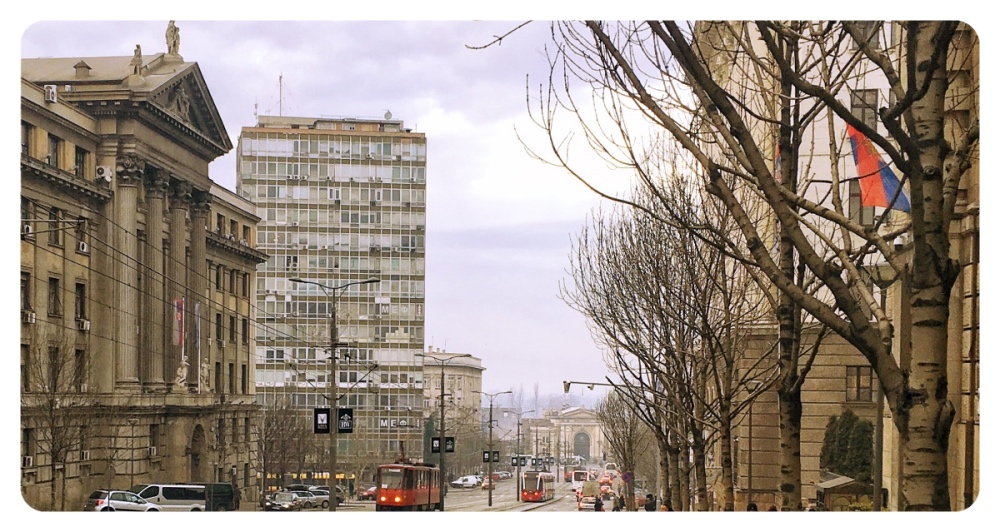 Politika is the oldest Serbian newspaper, founded in Belgrade, in 1904. Honoring its tradition, in 2016 the whole square was named Politika square, with Politika Tower at no. 1... read more

Svetogorska street is one of the major central city streets. It goes for about 500 meters, from Takovska street to Politika square (and tower). This a very old and very beautiful street, from the architectural and the historical point of view. With lots of richly ornamented facades, it shows the glamour of the old Belgrade... read more

Savamala historical district is located down by the river, and it represents one of the oldest parts of the city. The new Belgrade Waterfront is now built in continuation, making the right bank of the river Sava the most attractive city property... read more

Kraljice Natalije (eng. "Queen Nathalie") street is one of the central city streets that connects Zeleni Venac district and Kneza Miloša street, near the popular London Square. It crosses Balkanska street at the corner where the classical hotel "Prague" is located... read more

Balkanska street is a street that led many of the newcomers from the Main Railway Station to the city center back in the old days. Now it is just a long narrow street, covered with cobblestone in the lower part, which reminds the old citizens of Belgrade how much the city has changed... read more

The Cathedral Church of St. Michael, in Serbian called "Saborna Crkva", was built in 1845, and it is facing the building of the Patriarchate, in the vicinity of Belgrade Fortress and Knez Mihailova street, in the very center of the city. It is the second oldest Serbian Orthodox church in the city (the oldest being the Church of the Holy Apostles of Peter and Paul in Topčider park). It was built in a neoclassical spirit with baroque bell tower... read more

One of Belgrade's favorite places for having a picnic or small weekend excursion. if you are staying in the city for a longer period of time, be sure to visit it as it is close to the center (approx. 10 minutes by car if there is no too much traffic, or 30 minutes by public transport)... read more

Resavska street is one of the most important streets in the center of Belgrade. It goes from the Church of St. Mark and King Alexander blvd., crossing Krunska ("Crown") street, passing by Belgrade Palace at the corner with Kralja Milana street, then "Manjež" park and the Barracks of the 7th Regiment at the corner with Nemanjina street, all the way to the General Hospital... read more