After the Second World War, in the 1950's, Belgrade started developing across river Sava, in the plain which was at the time practically uninhabited. Over the years New Belgrade grew into a municipality with more than 150.000 people living in its confines. It was well known for its Brutalist architecture, and still is, but in the recent years it has become a real business center with modern high rise buildings, headquarters of international companies and banks, hotels and fancy residential complexes. 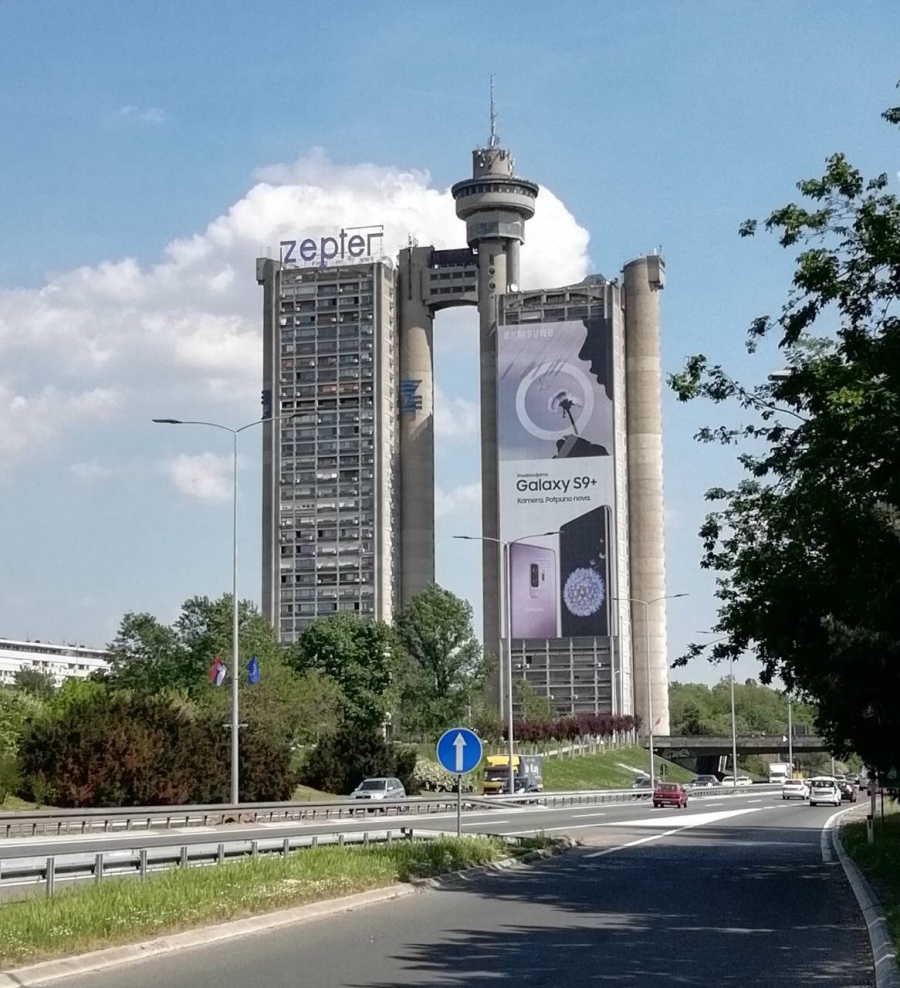 Genex tower is the second-tallest high-rise in Belgrade, after Ušće tower. Once, a symbol of Yugoslav economic progress, is now a monument to a lost civilization.

Genex Tower, which rises 115 meters (135 meters with the restaurant on top) and contains 35 floors, got its popular name after Genex conglomerate, ex-Yugoslavia's biggest trading company. It consists of two separate concrete skyscrapers, conjoined with a two-floor bridge at the 26th floor and a restaurant at the 35th floor. The larger tower is a residential block and the shorter one was designed for commercial office use. Since the office block hasn't been sold during the mass privatization in the 1990s, nowadays it serves only as a giant billboard and has banners for many companies hanging across its facades. A concrete rotunda, set above the bridge, was supposed to be a rotating, panoramic restaurant, but the mechanism wasn't installed so the restaurant never turned. It received its last guests in 1999.
The tower is also known as Western City Gate, as it greets people arriving in the city from the west (the main road from Belgrade Nikola Tesla Airport to the city centre leads this way). 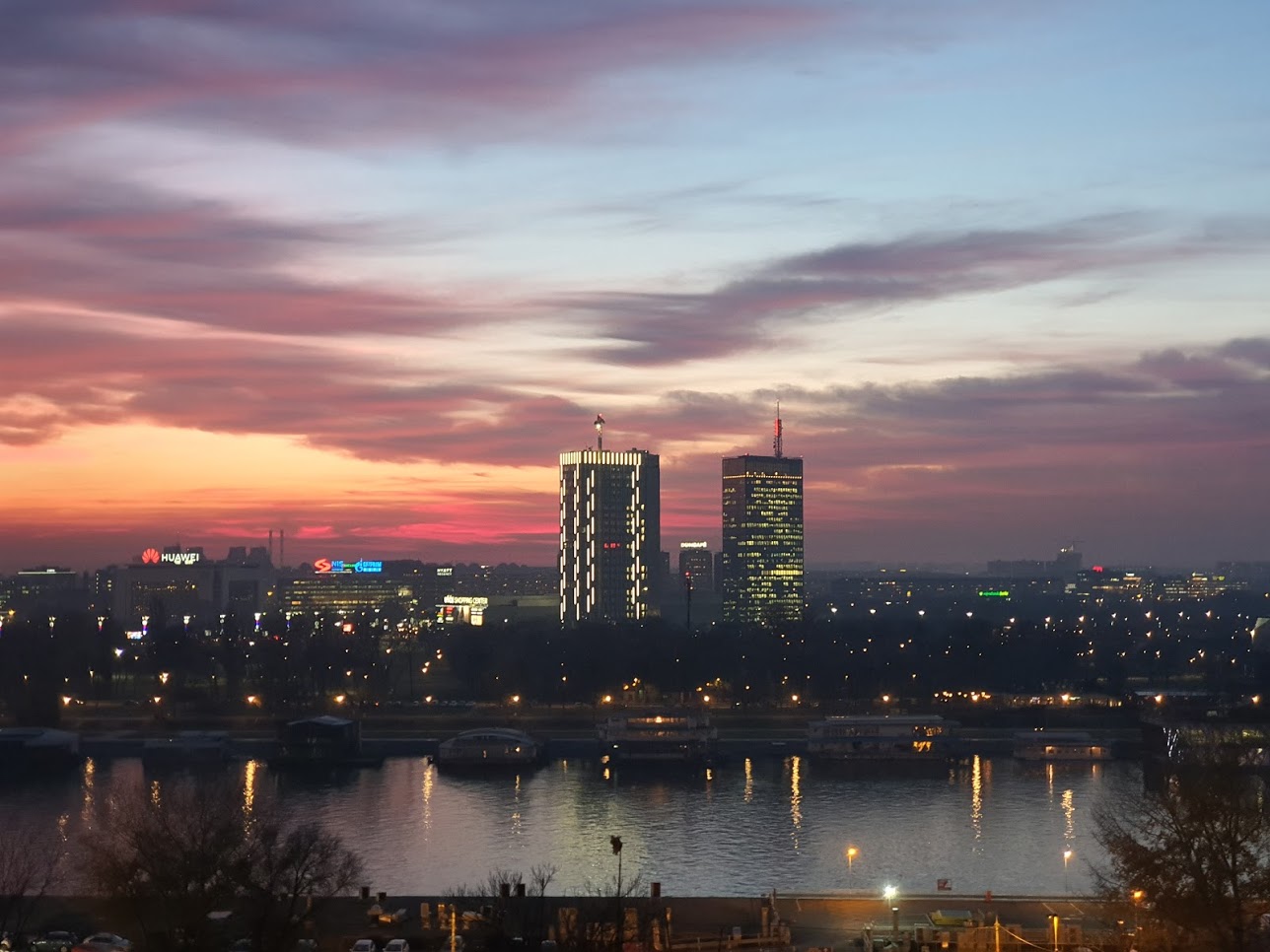 The first Ušće tower is one of the most famous landmarks of Belgrade, which overlooks the confluence of the Sava and Danube rivers from the New Belgrade side. It is the tallest building in Belgrade and Serbia (141m, 25 stories, with the addition of a 25m antenna). In 2019 the second, "twin tower" was constructed pretty much in the same fashion.

The first Ušće tower was built in the sixties as the headquarters of the Central Committee (CK) of the Communist Party of Yugoslavia, in the newly built part of the city - New Belgrade. The original building had 23 stories and was 105 meters tall. After the destruction of Yugoslavia, the tower was converted into an office building. During the NATO bombing of Yugoslavia in 1999, the tower was hit 12 times with cruising missiles. It was badly damaged, but did not collapse and remained standing. The trick was in its foundation, brilliantly designed. The steel armature was inserted in a sandy cushion, deep in the soil. And that saved the building from collapsing. After the reconstruction (2003-2005) two additional floors were added, with conference rooms on the 24th and a restaurant on the 25th floor. An observation deck, fitness area and cafe are located on the top floor of the building. 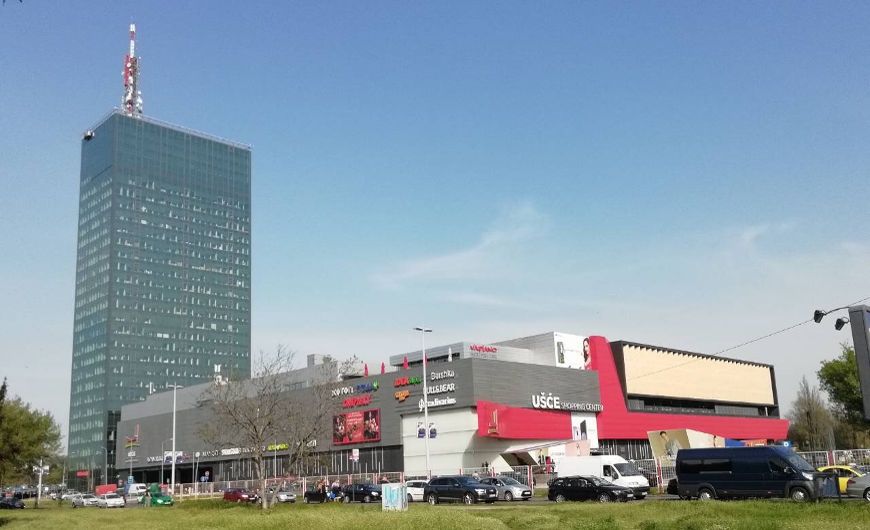 In 2009, in front of the Ušće tower, it was built Ušće shopping mall, a kind of urban sculpture, at the interface of the old and the new city of Belgrade. It is the largest shopping center in Serbia and houses more than a hundred shops, cafes and restaurants, a multiplex cinema with 11 theaters, bowling alleys and amusement arcades as well as a supermarket on an area of ​​4000 m2. It is definitely a world of its own and not just the most affordable place to go shopping in Belgrade, but the best place to come for variety and exploring the offer, especially if you're shopping for gifts. 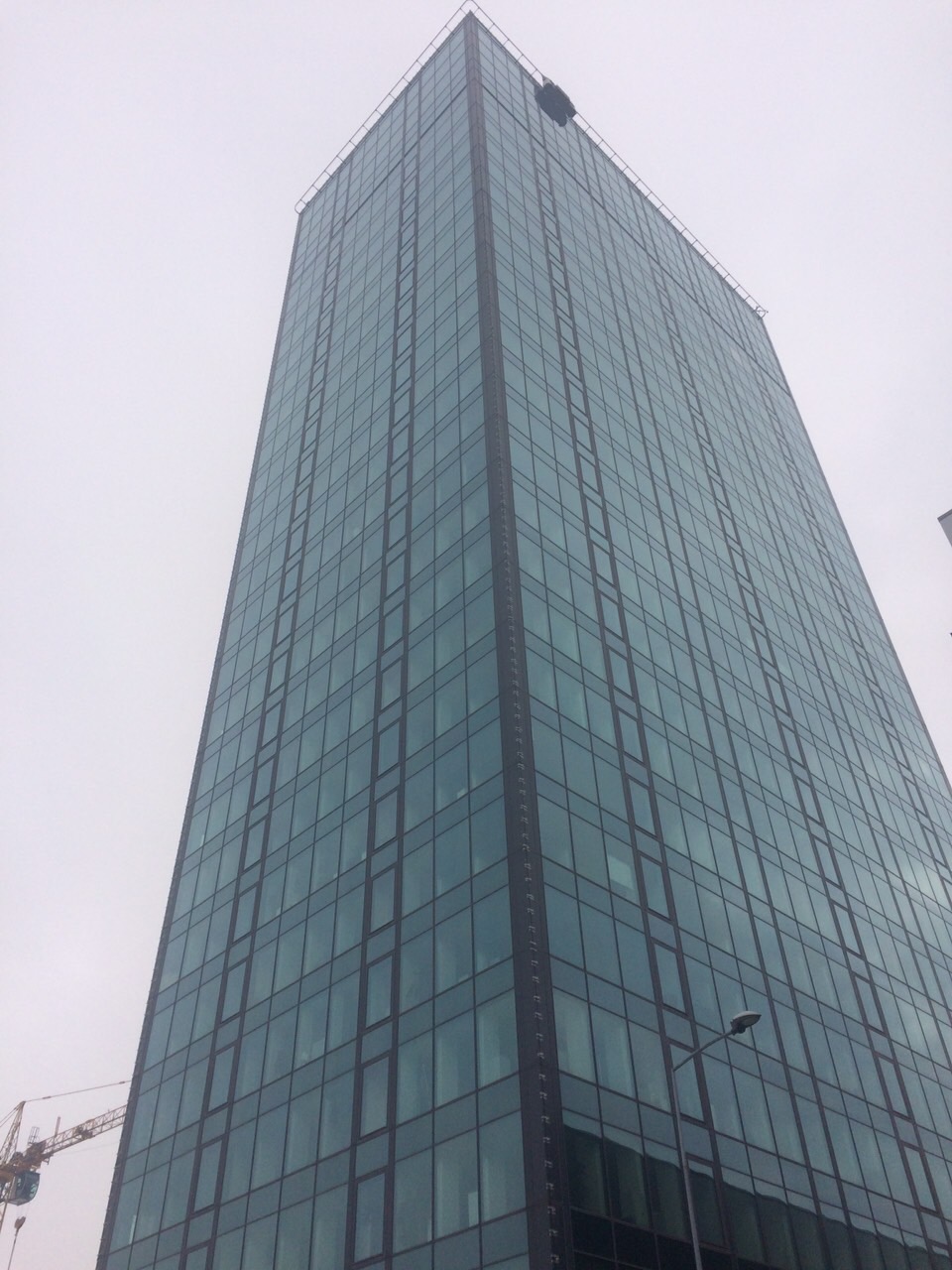 Glass windows of the offices are somethimes used for light shows during the evening and at nights, or as proper advertising panels. With the schematics of building's light switches it is easy to converted in a true modern, kind of futuristic billboard. 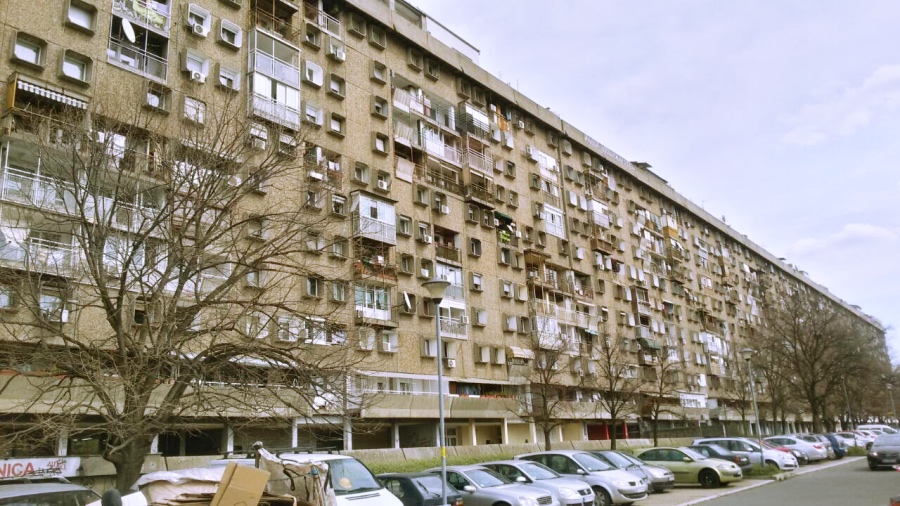 These funny looking buildings, called "Televizorke" (eng. "TV Sets buildings") because their windows resemble to television sets, are located in New Belgrade, next to the highway, so if you are coming from the north by car, it will catch your eye for sure. 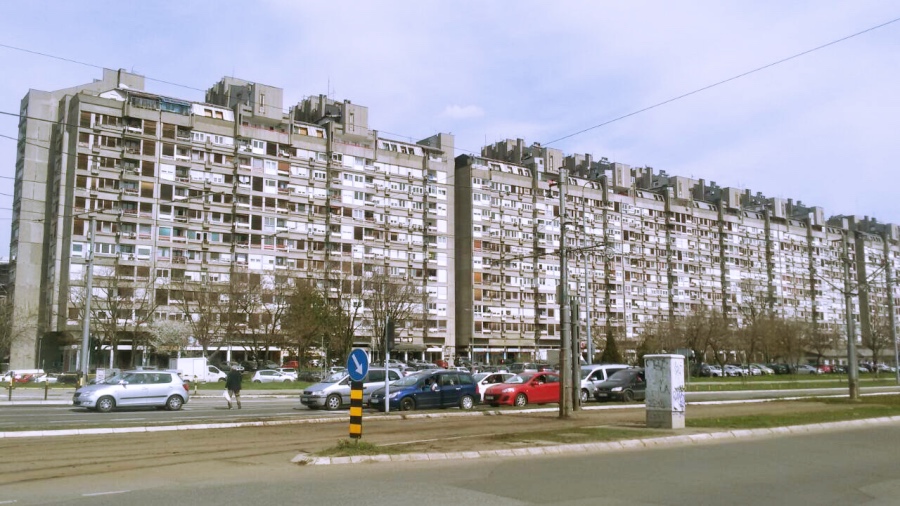 Buildings in Block 23 district represent a standard type of architecture that was used for construction of edifices in New Belgrade during the socialist period. 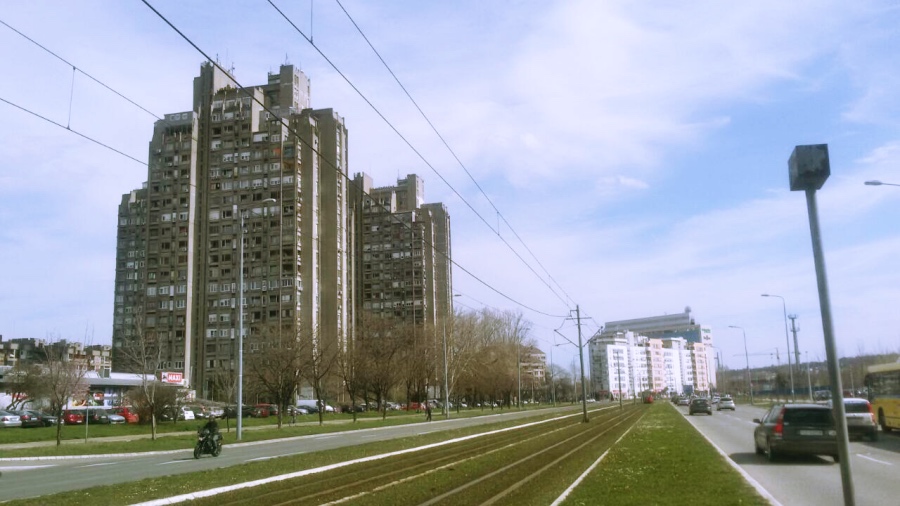 Two high-rise buildings in Block 23 district represent a standard type of architecture that was used for construction of edifices in New Belgrade during the socialist period. 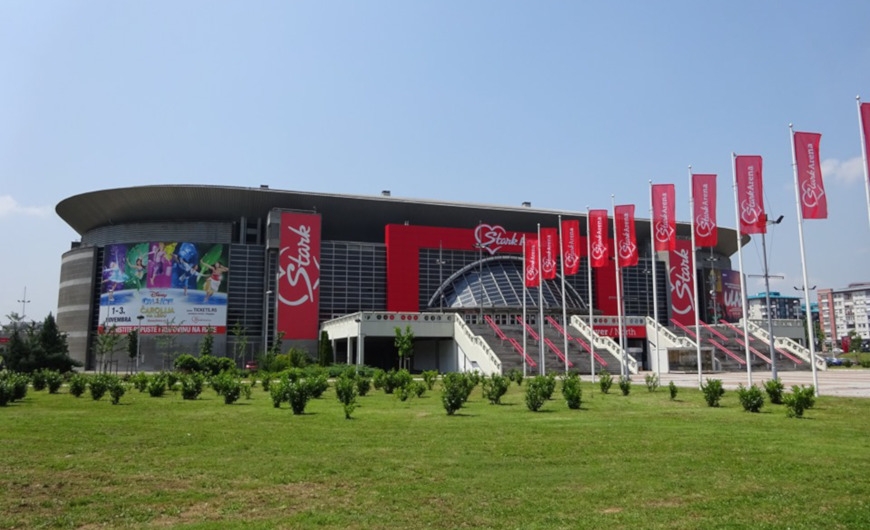 Belgrade Arena (now called "Štark Arena") is a multifunctional 20.000+ seats venue where the most prestigious sports events are organized, as well music concerts and performances of world's biggest stars and celebrities. 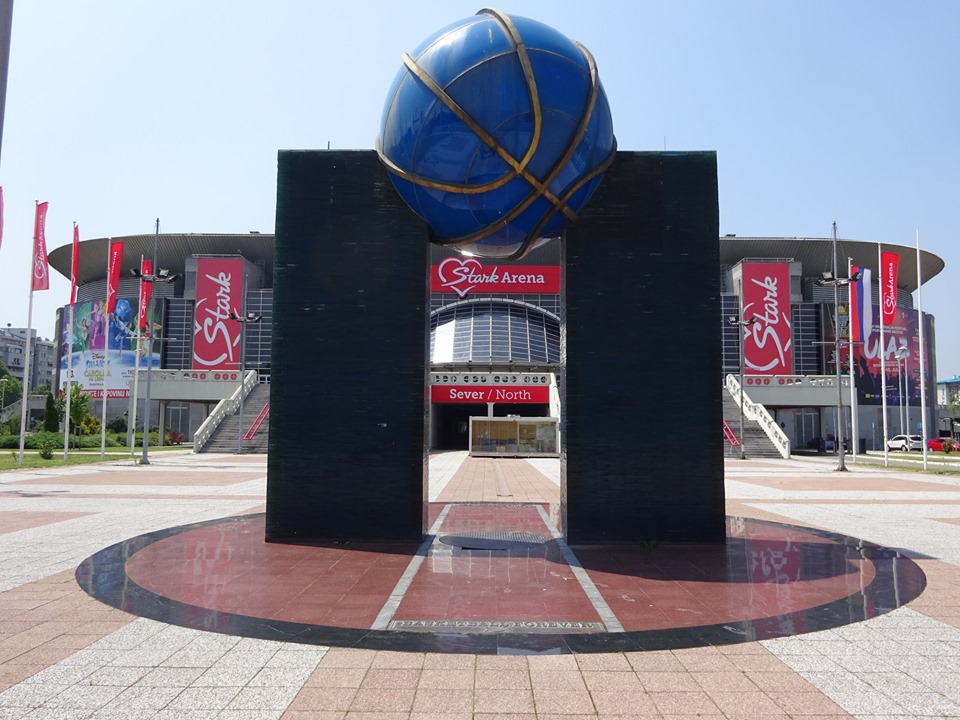 For example, the final match of the 2009 World League between Serbia and Brazil was attended by 22 680 spectators (which was the indoor record of the World League Finals). In 2014, Crvena Zvezda basketball club played Eurocup match with Budivelnyk from Kiev with 24 232 fans in attendance (which is the European record for any basketball game played indoors). Also, in 2016, the final match of the Waterpolo European Championship between Serbia and Montenegro was attended by 18 473 spectators (which is the highest attendance in waterpolo history). 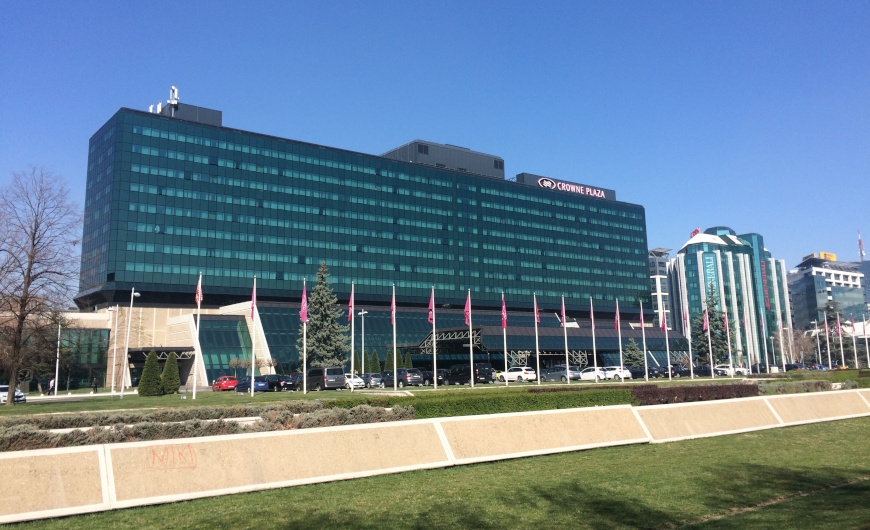 Crowne Plaza hotel is currently the largest hotel in Belgrade, with the capacity of cca. 400 rooms.

Located near the banks of the river Sava, on the New Belgrade side, this hotel offers a perfect view on the old part of the city.

Visit the Official Web-site of the hotel for more information. 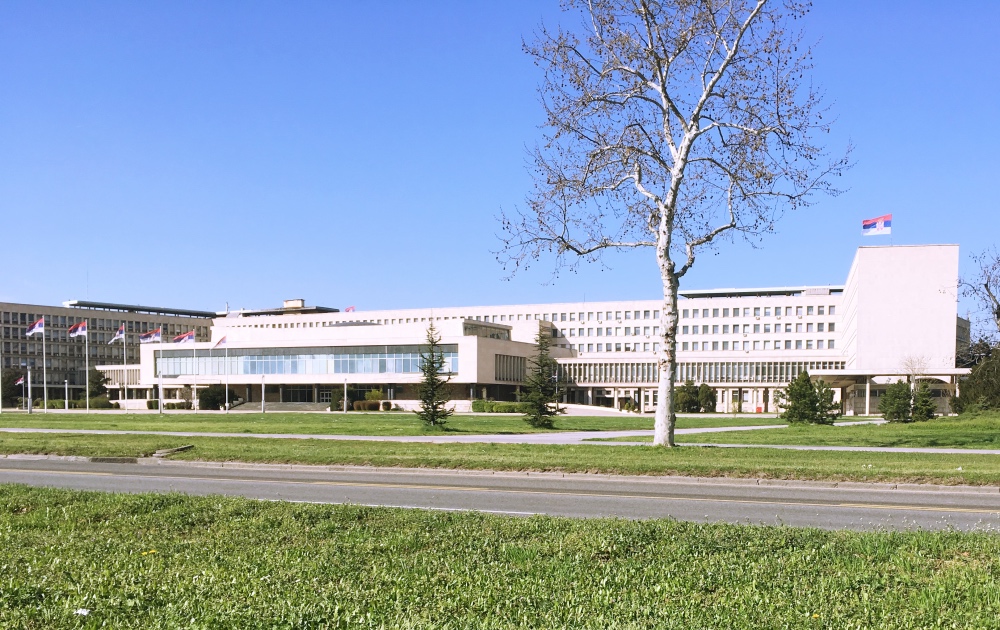 Originally constructed as the headquarters of the Federal Executive Council of Yugoslavia, one of the main governmental institutions of the time, now it is used to hold offices of various ministries and state agencies.

Imperatively constructed before the First conference of the Non-Aligned Movement in 1961, in Belgrade. It was one of the first buildings in New Belgrade and it shaped the future urban planning of this district. It was named the Palace SIV (Palace of the Federal Executive Council) or informally Palace of the Federation. Nowadays, when Serbia is an independent state, it is called Palace Serbia. 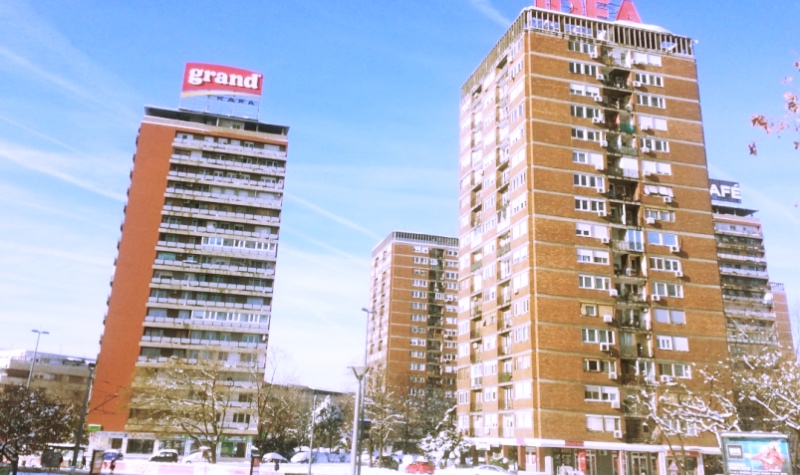 Six identical high-righ buildings in two rows that you see on your left when you enter New Belgrade from Brank's Bridge are commonly known as "Six Corporals", as it was constructed primarily for housing families of army officers. 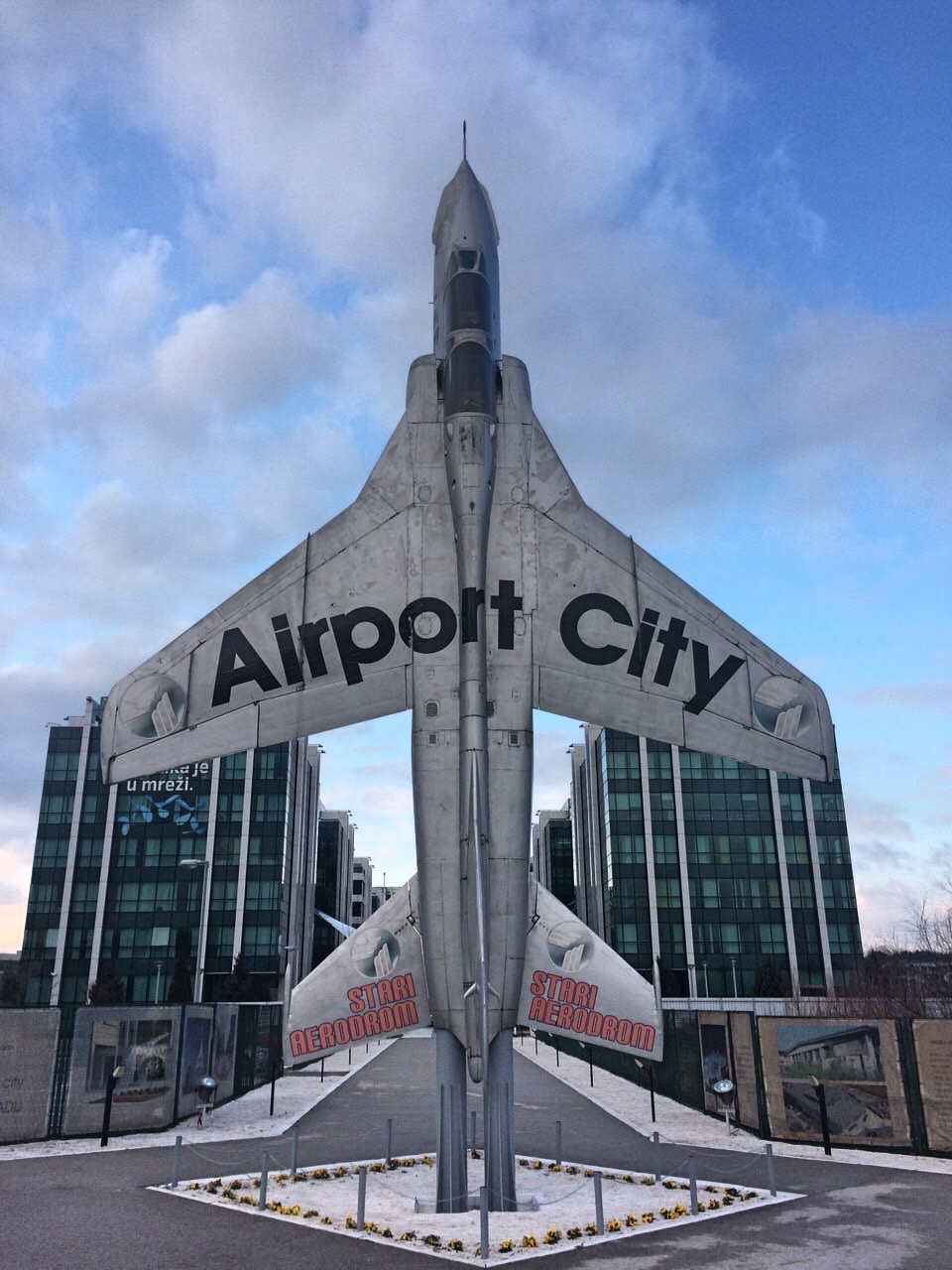 The Airport City is a multifunctional commercial complex, a "Business Park" as they like to call it, that consists out of 7 modern buildings located int the area of an old airport, in New Belgrade. The main symbol of the park, thus, is an old fighter plane positioned at the entrance.

The location of today's Airport City was intended for Belgrade's international airport of "Dojno Polje", which was constructed in 1927. It was damaged during the WWII, and as of 1962 and construction of the new modern airport at another location a bit farther away (today's "Nikola Tesla International Airport", Belgrade's only airport) it became obsolete. Two new commercial towers are planned to be build, that will stand out, and surely represent a new landmark an height point in New Belgrade district. 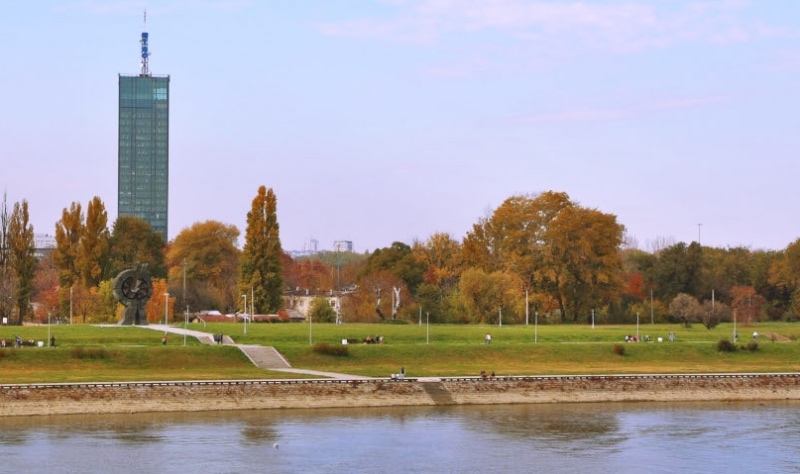 Ušće park complex is a huge green space and promenade by the river on New Belgrade's side. It consists of Ušće Park, Staro Sajmište Memorial Park (photo above) and Friendship Park. (read more)