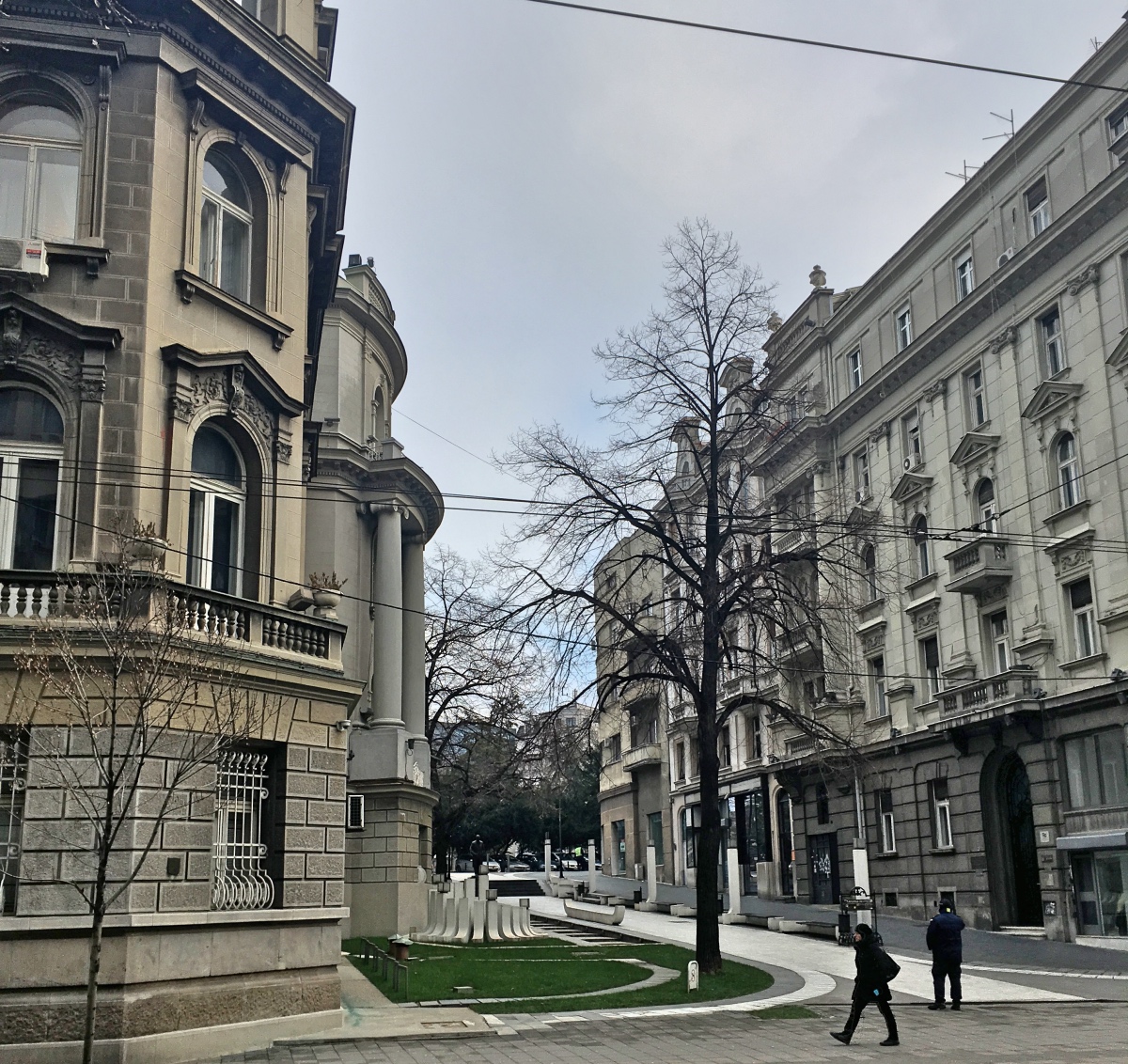 Andrićev Venac is a semi-pedestrian street in the center of Belgrade. It consists of two parts, in total about 200 meters long.

The New Palace (now Presidential Palace) is located at no. 1, and this is the head office of the President of the Republic of Serbia. 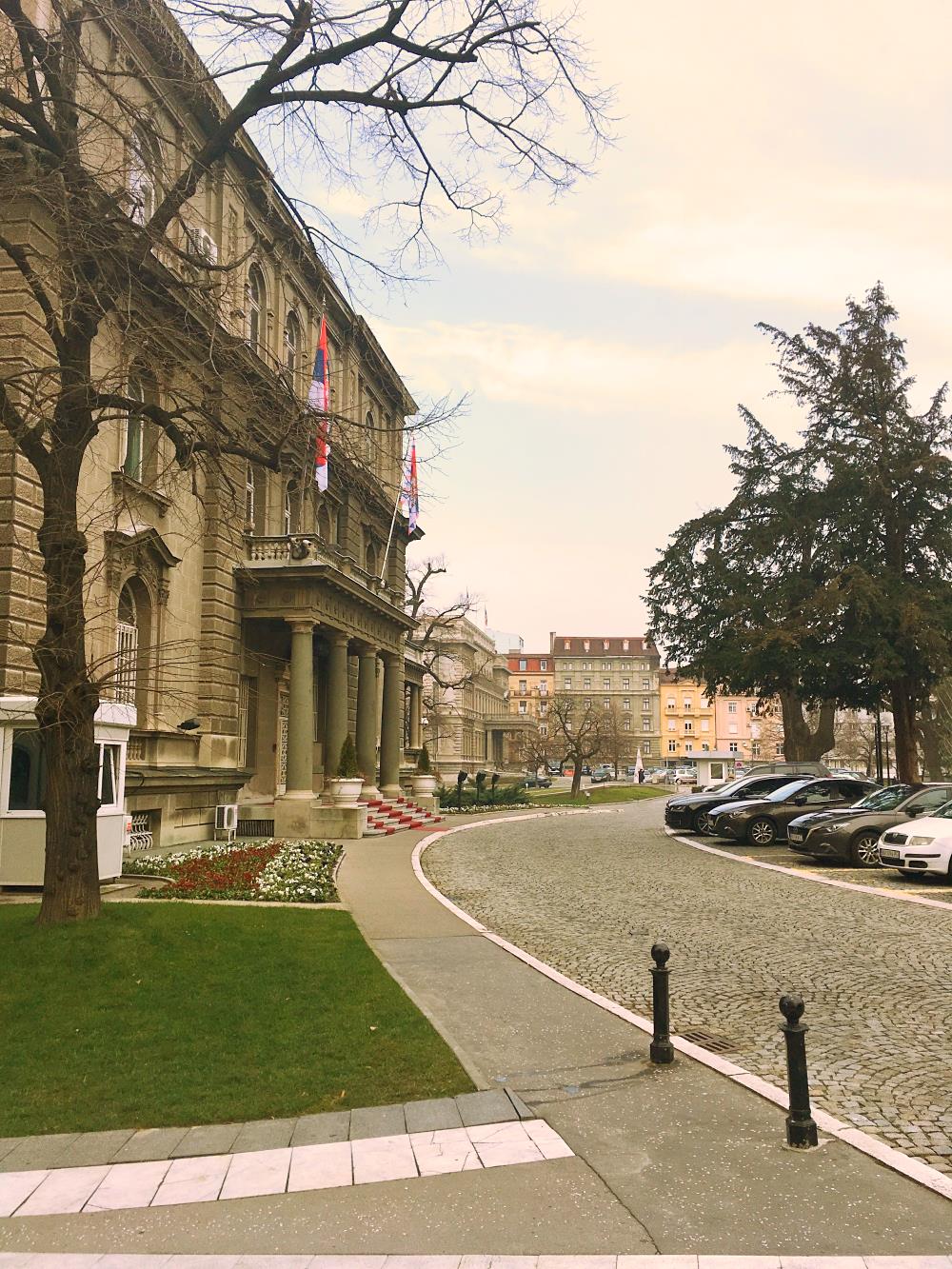 In the center of a little square stands the monument of Ivo Andrić, famous Serbian writer and Nobel prize winner, and this area is named after him. He lived in the building no. 8, which is next to the monument, since 1958. His appartment is converted to the memorial musem in 1976, one year after his death. 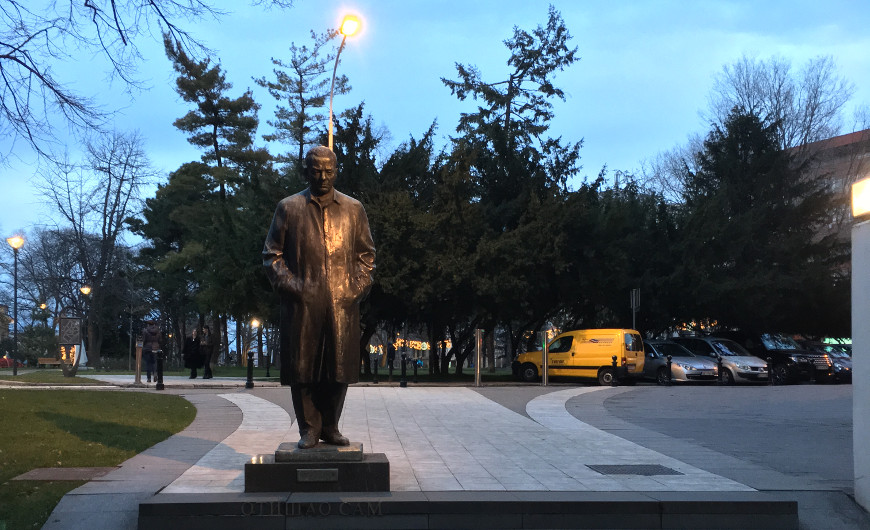 Cobblestone road is open for vehicles, but only to the gate of the Presidential Palace, so people who live or work there use this space to park their cars. It is possible to reach Kralja Milana street by car, but it is reserved for government use, so it is safe to say that it is a dead-end street. By foot it is passable, and it's quite nice. 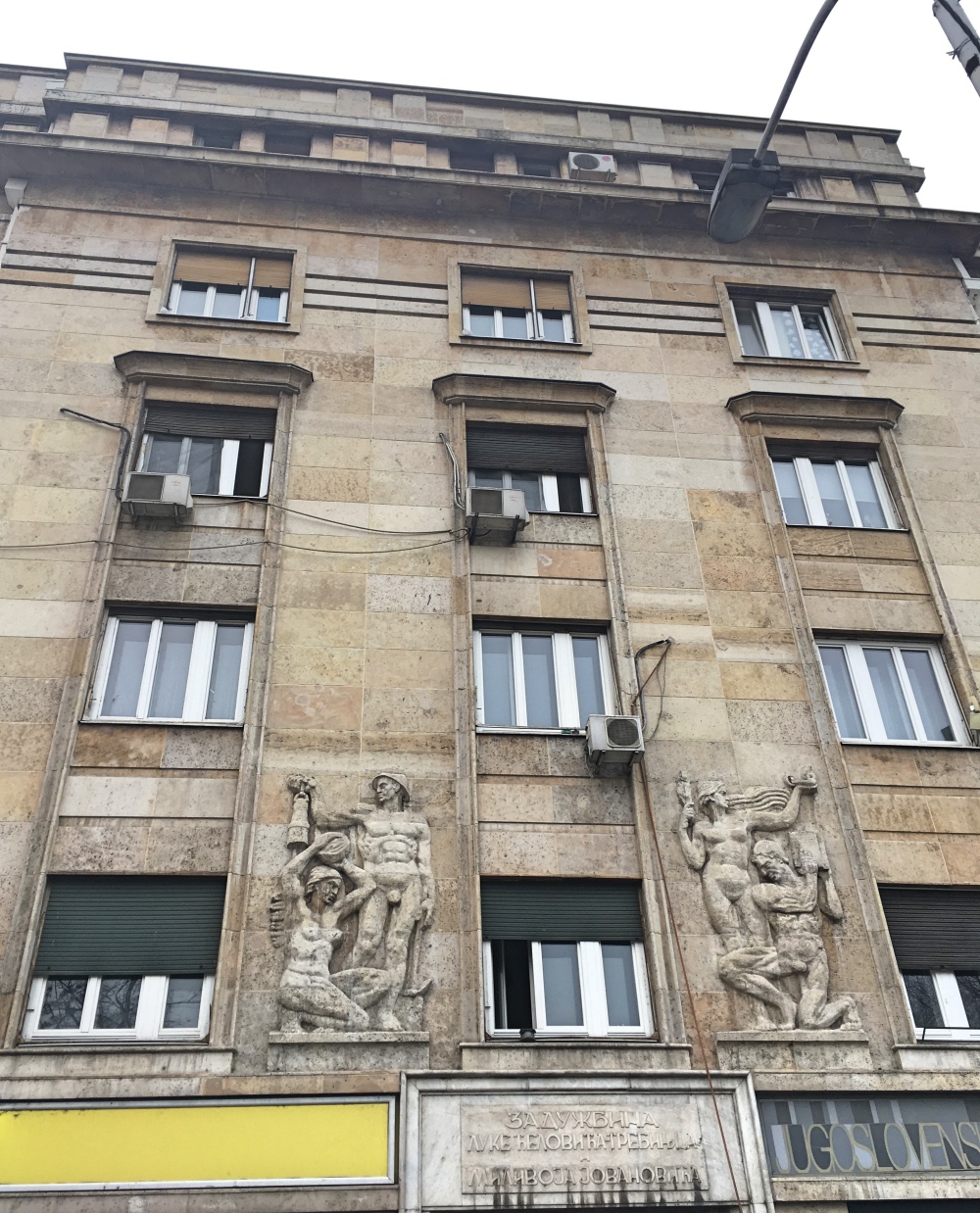 The surroundings of the street is calm and quiet, you can rest on the benches in front of the monument and contemplate, or take a walk in a peaceful atmosphere created by old buildings, palaces and green spaces. And all of that still being in the very center of the city, where there is normally lot of traffic.

Behind the monument lies a large Pioneers Park, and little further in the back Nikola Pašić square, with magnificent building of the National Assembly of Serbia. Tašmajdan park and St. Mark's Church are minutes away.

After crossing Kneza Miloša street you enter straight forward to Krunska (Crown) street passing by a truly wonderful building of the Turkish Embassy (moved there in 1967), and then you can go directly to Nikola Tesla museum (10 minutes on foot). 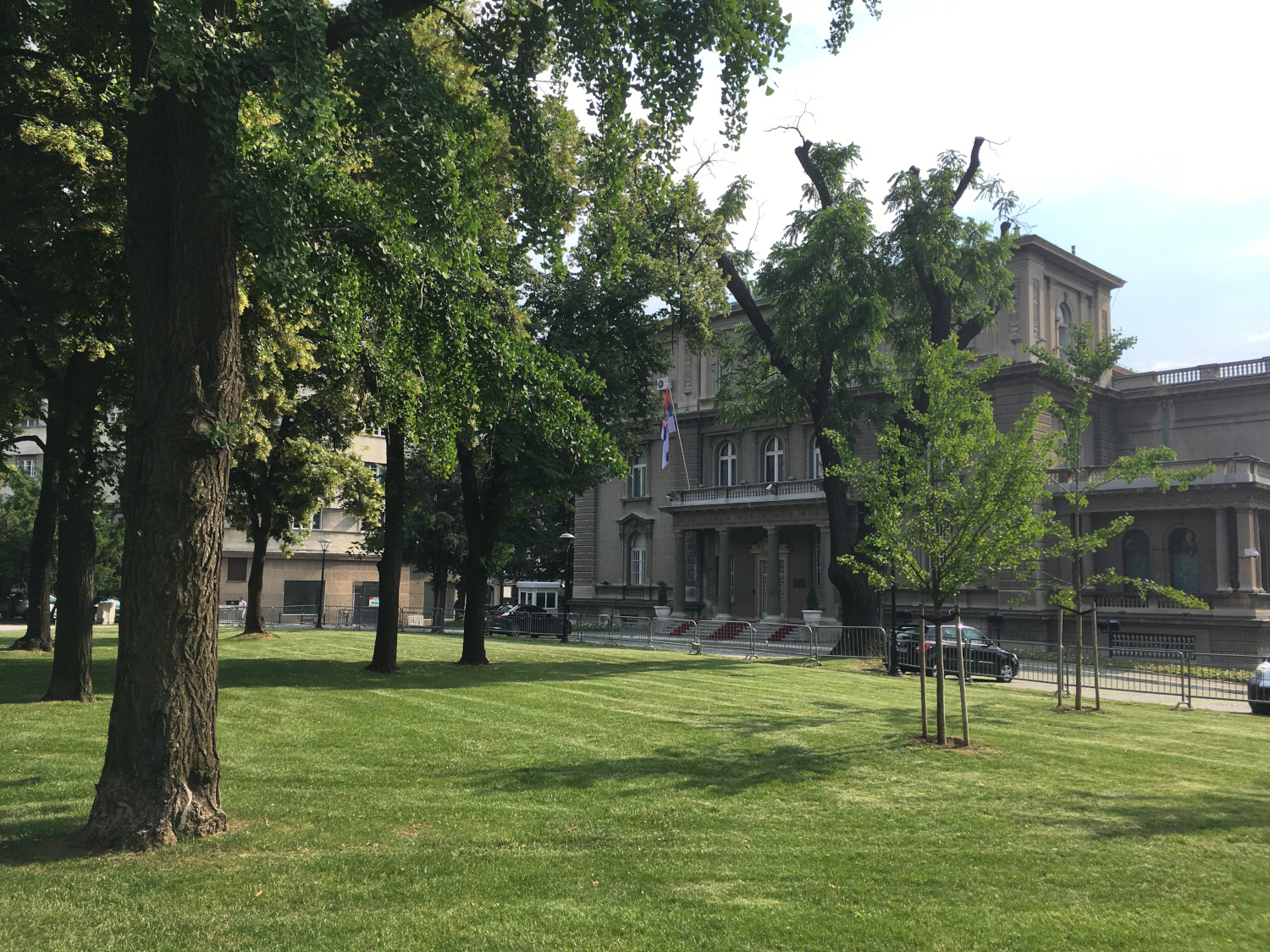 The New Palace was built as an additional wing to the Old Palace, immediately after World War I. It was designed to be the royal residence of Karadjordjević dynasty. The two palaces were conected with a beautiful concrete fence which was removed after World War II, and the royal gardens were converted into a park.

Architecture: academism with renaissance and baroque elements on the facade

After the assassination of King Alexander of Yugoslavia in 1934, the palace was converted into a museum of Prince Paul, with an impressive art collection that prince passionately gathered over the years. After WWII, it served for various governmental purpeses. Now, it is the headquarters of the Serbian president, thus the new name - Presidential Palace. 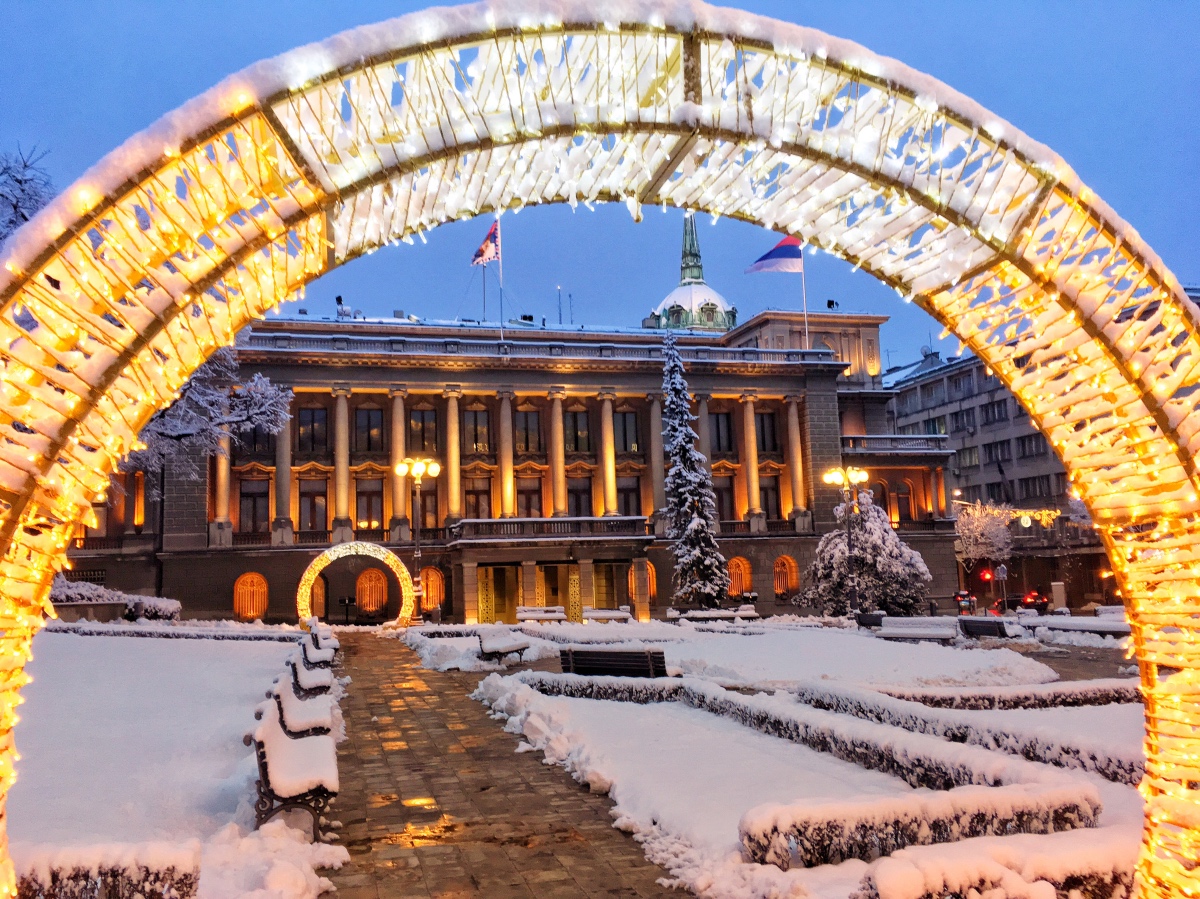 Between two world wars, it formed part of the royal complex, together with the royal garden. Back then, the two palaces (the Old Palace and the New Palace) were connected, not physically but urbanistically, by an arched shaped building, which made the whole complex looking like a real royal court with two large wings. But after the WWII and Tito's communists came to power, it changed its l. The central building was removed in 1957, because, the word is, some high party official demanded so, as it stood in the way and prevented him from seeing the building of the National Assembly from his office in the Old Palace.