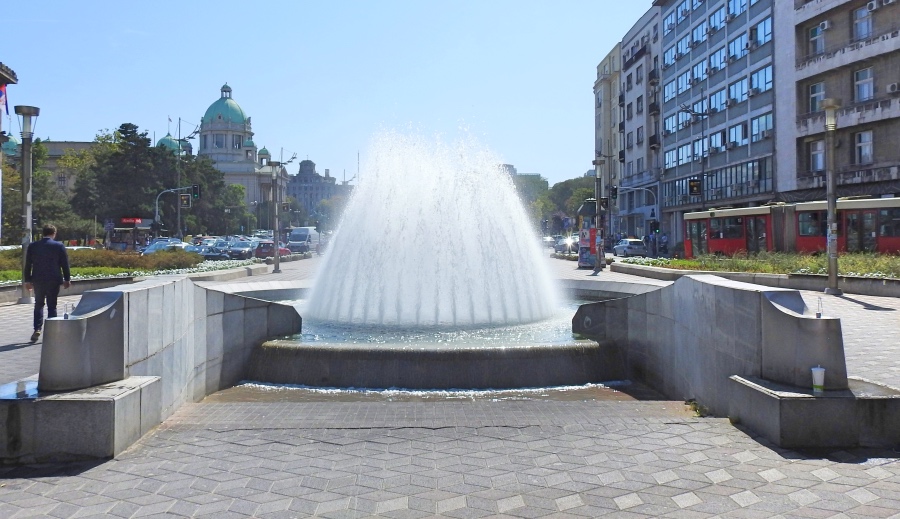 Nikola Pašić square is, together with Terazije square and Republic square, which are in immediate vicinity, one of main city squares. 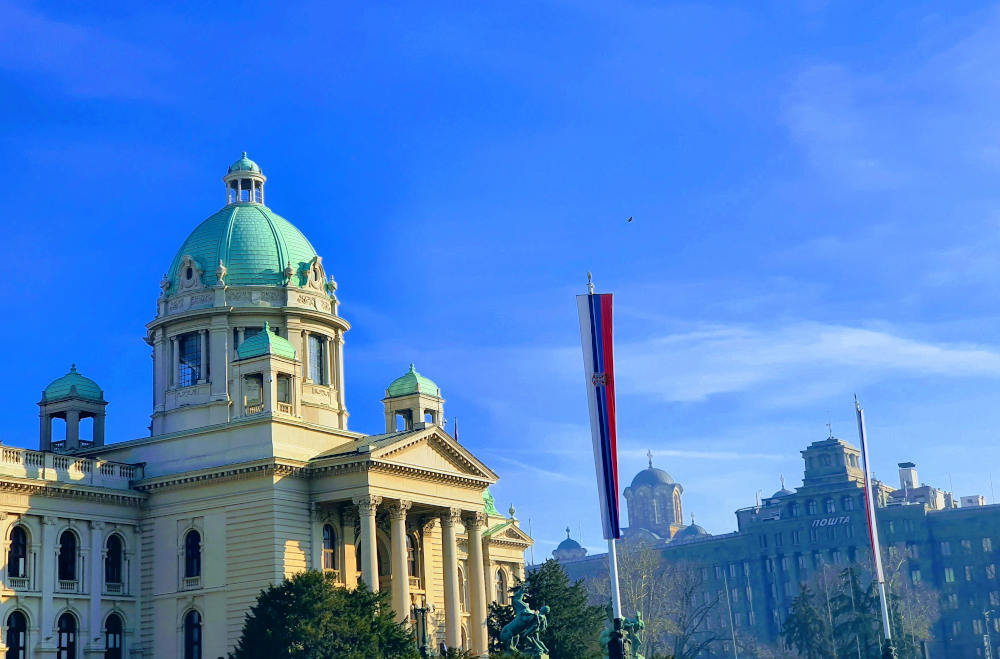 Named after Nikola Pašić, Serbian most prominent political figure in the early 20th century, prime minister and leader of Radical party, whose monument is errected at the central spot, in front of the monumental building of "Dom Sindikata" (eng. "Home of the Workers' Unions") constructed in 1957 to host the offices of various kinds of workers' unions. Now it is mainly used for businesses. The famous "Dom Sindikata" hall (now called "Kombank Hall") is located in the gound level and it is used as a movie theater and concert hall. There are also two smaller halls inside that are used mainly for cinematic purposes.

This square is also bounded by the impressive structures of the Historical Museum of Serbia, National Assembly of Serbia, the Old Palace (now City Hall), Pioneers' Park and Main Post Office building. 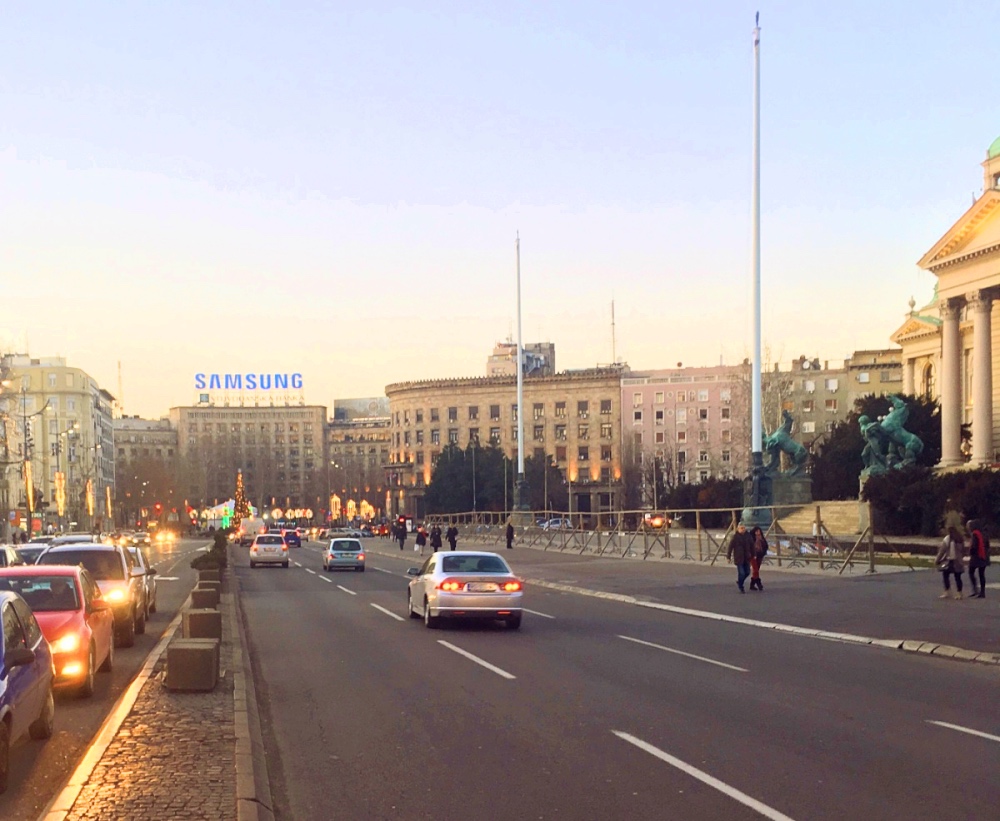 Back in the days of old Yugoslavia, the square was called "Marx & Engels Square", because in those times the communist ideology was predominant around here. 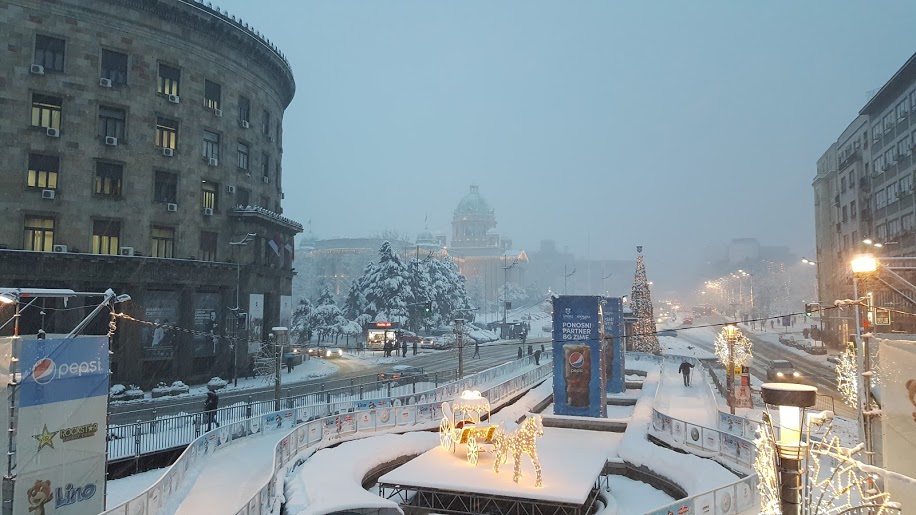 It is one of main urban traffic points. In the pedestrian zone of the square, in front of Nikola Pašić's monument, there is a wonderful fountain. During winter, this place is converted into an ice rink. 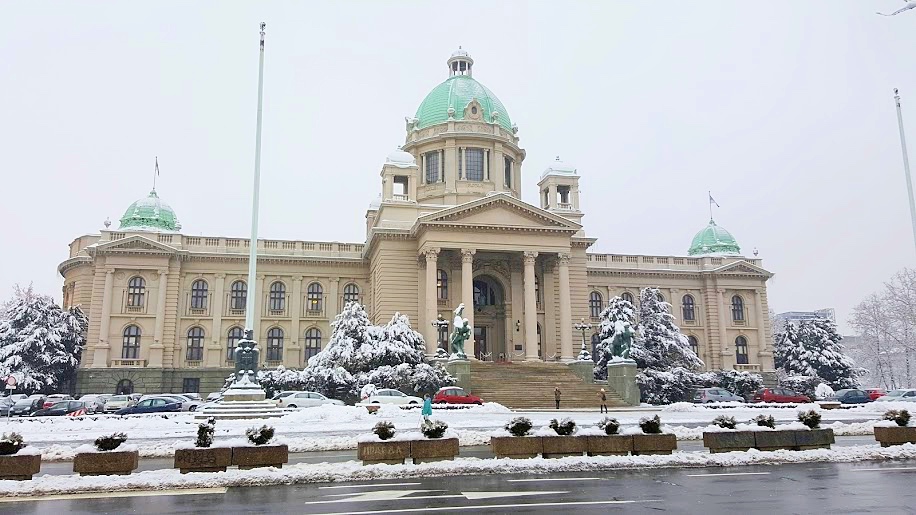 Stand-alone monumental building of the National Assembly of Serbia is one of the most beautiful structures in the city, and you cannot miss it. It was carried out in the manner of Academism and completed in 1936.

This building was being constructed for almost 30 years (started in 1907) due to the Balkan Wars (1912/13) and the Great War (WWI, 1914-1918), which halted the progress. The place for the House of Parliament was chosen on a basis of the historical importance. Namely, close to this spot, on November 30th,1830, the Great People's Assembly was held and the Hati-Sheriff from the Turkish Sultan was read, granting Serbia's autonomy from the Ottoman rule. However, on the exact spot of today's National Assembly of Serbia there was a Turkish mosque. On the occasion of the grand opening, on October 18th, 1936, Stevan Ćirić, the president of the Parliament, said: "It is not a shame that it took us so long to complete this work, because meanwhile we have built our beautiful country". On the stairway to the front entrance there are two magnificent sculptures of Serbian sculptor Toma Risandić called "Black horses at play", placed there in 1938.

True Story? Some say that, apart from the above mentioned problems, the construction was also being dragged out because King Alexander was obstructing it in various ways. Apparently, a prophet told him that he would die upon the construction of this monumental building. In1934, roughly, the edifice was errected, the works on the exterior were completed, and King Alexander was assassinated in Marseille. 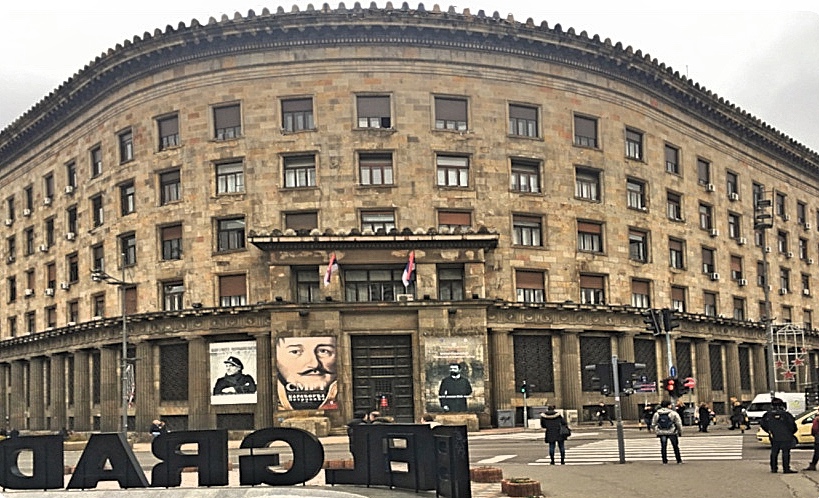 The Historical Museum of Serbia is located in the very center of the city, at 11 Nikola Pašić square, in a building that represents an architectural masterpiece of Art Deco style.

At first, the building was constructed (from 1932 to 1934) to host the Agrarian Bank, but as of 1963 it hosts a precious collection of more than 35000 pieces from Serbian history and tradition. It hosts many temporary exhibitions, as well. The museum is open from 12 pm to 8 pm (Tuesday thru Sunday), and it is closed on Moday. The admission is 200 RSD (cca. 1.7 euro). For more info, visit the official web-site. 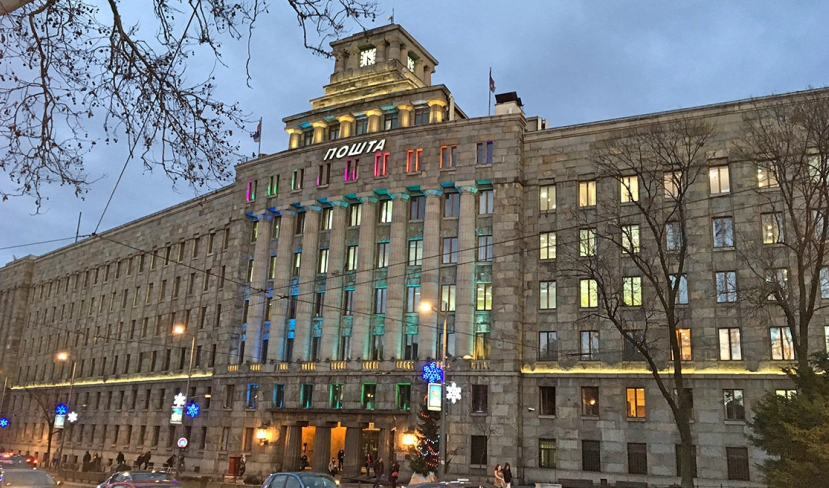 This is one of the largest and most impressive buildings in the city center. It covers an entire block, and beside the Post headquarters it hosts the Constitutional Court of Justice as well.

The architectural solution for this building, the word is, was approved by none other than the King himself, in 1930. He was not satisfied with the first proposal, more artistic, that would make of the Main Post a bird flying with the wings spread wide. It was too soft for him. This building needed to be solid, like his firm and steady rule over the country. So, he got what he wanted. After 8 years of construction, in 1938, the building was completed. It was designed in modern fashion, in the spirit of Academism. It is really monumental and gives you an impression od strenght and firmness. However, the King never saw it in reality because he was assassinated in 1934, in Marseille. 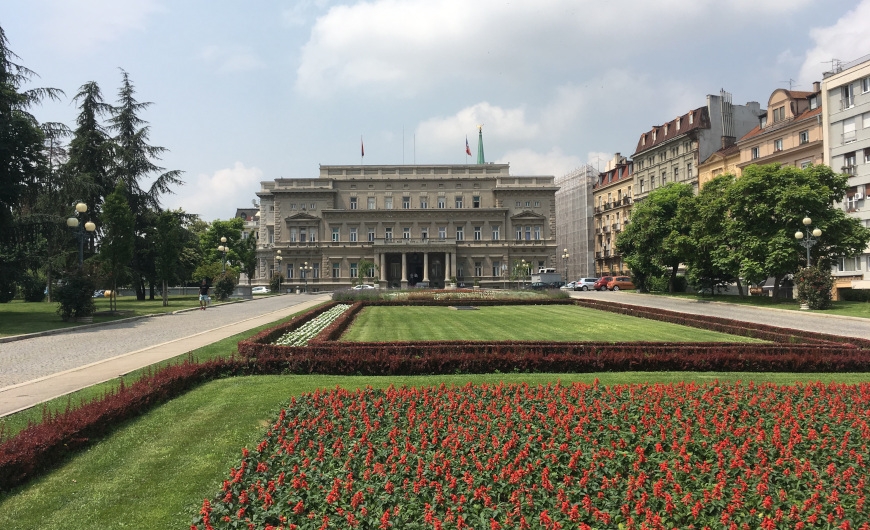 The Old Palace was home to Serbian kings from dynasties Obrenović and Karadjordjević. King Milan Obrenović built it during the time of his reign (in 1884) as a true and representative royal palace that Belgrade missed. According to its purpose, the palace was designed in the spirit of Academism. It is located at the outskirts of the Pioneers Park, in the very center of the city.

The palace lost its royal character after the WWII and establishment of the socialist republic. In 1961 it was converted into Belgrade's City Hall. The famous balcony of the palace greeted many Serbian athletes and national teams who won medals at prestigious competitions all over the world, and it became a tradition for the people of Belgrade to gather in front of the City Hall to welcome their sports heroes. 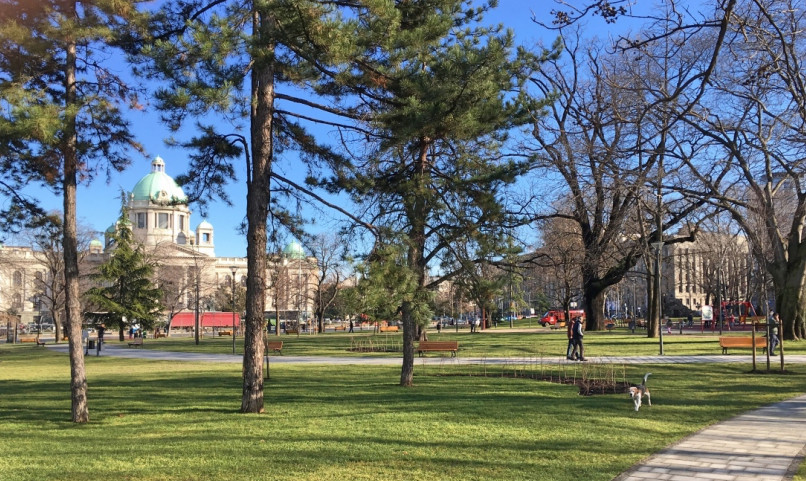 Pioneers park, located in the very heart of the city, bounded by the Old Palace (now City Hall) and the New Palace (now Presidential Palace), and overlooking the National Assembly, is a truly unique place.

Between two world wars, it formed part of the royal complex, together with the royal garden. Back then, the two palaces were connected, not physically but urbanistically, by an arched shaped building, which made the whole complex looking like a real royal court with two large wings. But after the WWII and Tito's communists came to power, it changed it looks and it was named "Pioneers" after "Tito's Pioneers", organization of youngsters soon to become members of communist party. The central building was removed in 1957, because, the word is, some high party official demanded so, as it stood in the way and prevented him from seeing the building of the National Assembly from his office in the Old Palace.

It is a peaceful and quiet spot in the middle of an urban jungle. Monument to the most famous Serbian female painter Nadežda Petrović is located there, as well as the fountain called "Girld with a jug".

Monument to Ivo Andrić, Serbian Nobel prize winner, is located at the outskirts of the park, next to the Presidential Palace. There is also writer's appartment, converted into museum.

At the entrance to the park, opposite to the Presidential Palace, there is a monument to the WWI Battle of Kajmakčalan, which at first may seem to you as an ordinary pile of rubble. On the contrary, it is a place of great importance for the Serbian people and their history.

Read more about Pioneers' Park in the separate article.