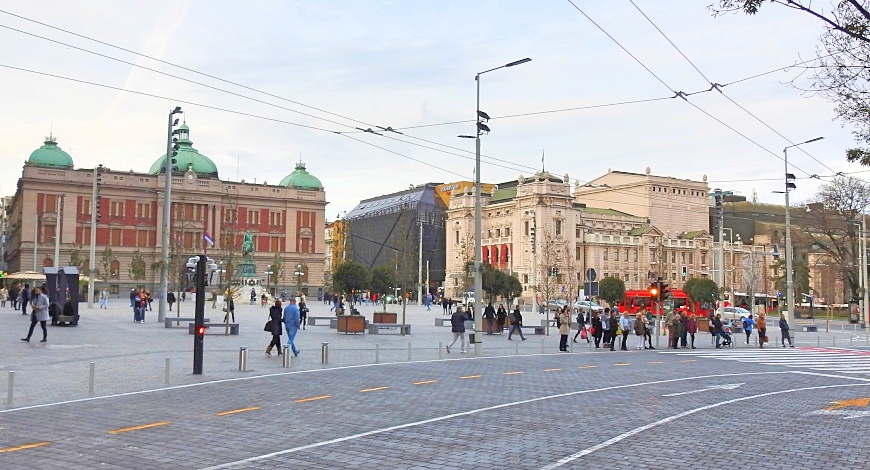 Formerly known as "Theater Square", after the magnificent building of the National Theater which was built in 1869 when the whole place began to get its shape, Trg Republike (Republic Square) is, together with Terazije Square, the principal spot in the center of the city.

The place was renamed after WWII and fall of the Kingdom. The new, socialist regime proclaimed the Republic, and the central city square was named in honour of the newly installed political system. After 1991, and dissolution of Yugoslavia, there has been initiatives for square to be renamed once again, but it didn't happen to this day. But, before all of it, in 19th century, this place was known as "Prince's Square" (ser. "Knežev Trg"). There was the first post office, where the first phone ranged in Serbia. Also, there was a tavern of Ilija M. Kolarac, merchant and great benefactor. It was a very vivid place. The word is that in 1928, this kafana (Serbian word for "tavern") was visited by Rabindranath Tagore, famous writer and philosopher, and Nobel prize winner, during his short stay in Belgrade. Unfortunately, the place was demolish during 1941 Nazi bombardment of Belgrade and never rebuilt. At least, not at the original spot.

Republic square, in a wider sense, is actually pretty big. Its core is a pedestrian zone between two great buildings on the west - of the Palace "Riunione" and House of the Press that are making a gateway to Knez Mihailova street, a main city's promenade, then buildings of the National Museum of Serbia and the National Theater to the north, Francuska (eng. "French") street to the east and Kolarčeva street with the palace of the old Yugoslav Bank on the south. But in reality, it is considered to be much wider, and to spread all the way to the building of the Veterans' Club, which is positioned farther to the east, next to Skadarlija bohemian district, assuming a small park that is called nowadays "Plateau of Dr Zoran Djindjic", after the Serbian prime minister who was assassinated in 2003. 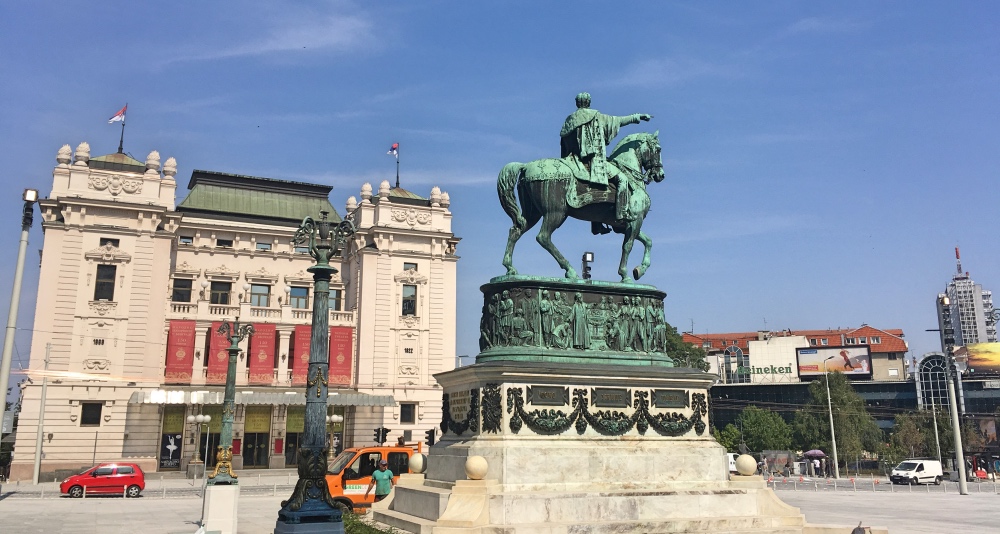 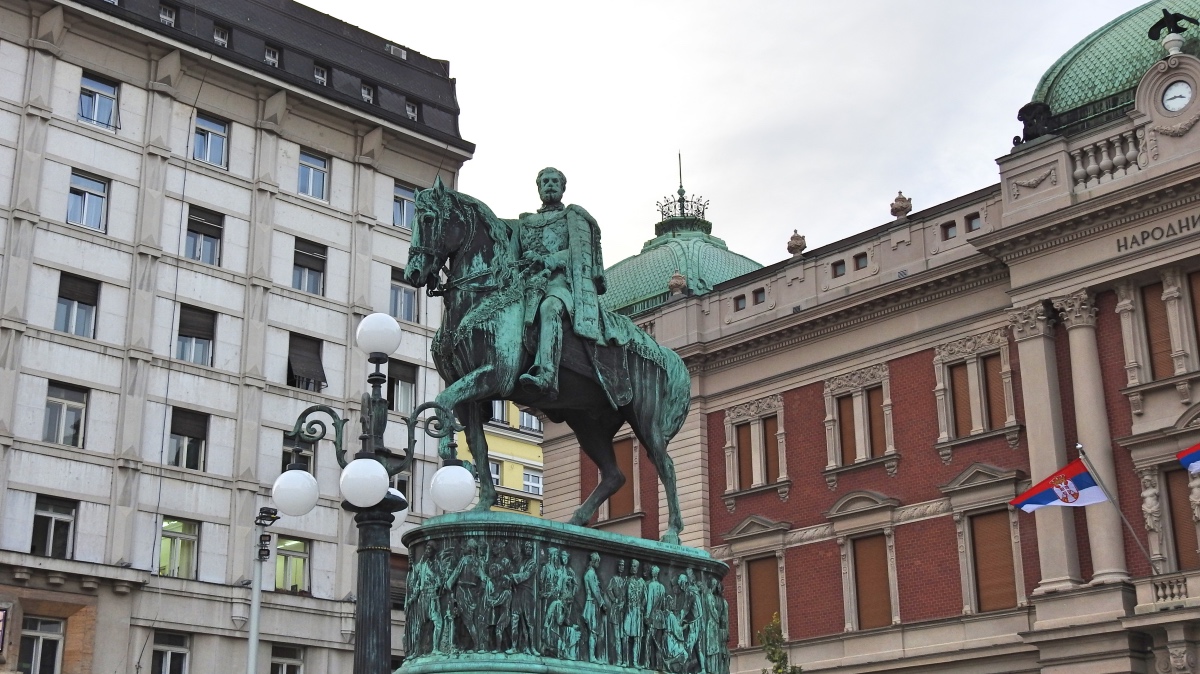 Knez Mihailo, or in English "Prince Mihailo", is one of the key figures in modern Serbian history. With his diplomatic efforts, he managed to persuade Turks to peacefully leave Serbia, effectively gaining the full state of independence. In 1867 he got the keys of the City of Belgrade from the Ottoman rulers. He was brutally assassinated in 1868. The monument was designed by Italian sculptor Enrico Pazzi, and put in place in 1882. 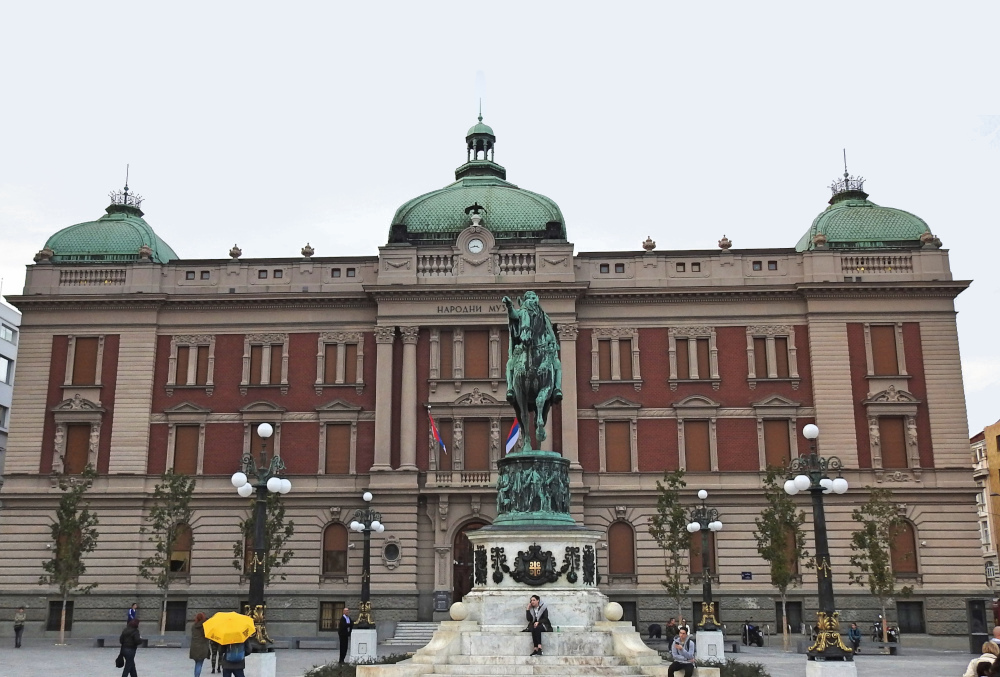 Built in 1903, in the architectural manner of neorenaissance, the National Museum of Serbia reopened its doors to the general public in 2018, after nearly 18 years of closure.

Founded in 1844, the National Museum of Serbia is the oldest institution of its kind in Serbia, and now celebrates 175 years of existance with special exhibitions of Serbian most prominent painters and their masterpieces. This is advertised throughout the city, as you can see on the photo of the buildings being reconstructed and covered with panels promoting exhibitions. Today, the museum has more than 400.000 archeological artefacts, scripts, sculptures, frescos, paintings and other artistic objects. It has an impressive permanent exhibition, but it holds temporary exhibitions of great value and artistic importance as well. It represents a true national tresure.


Belgrade mummy, called "Nesmin" (which means - one who belongs to God Min), it is argued, is unique in the world becuse in the sarcophagus it contained a papyrus roll, that remained at the original spot where the priest left it - under the biceps of the left arm, close to the heart, with the entirely legible complete text of Book of the Dead (which was not the case with other mummies). Belgrade mummy is now on public display, as a part of the permanent exhibition, in the National Museum of Serbia. It is open to visitors every Saturday at noon (12pm). You can see it and find out more on the official web-site of the National Museum (this article is available in Serbian only). 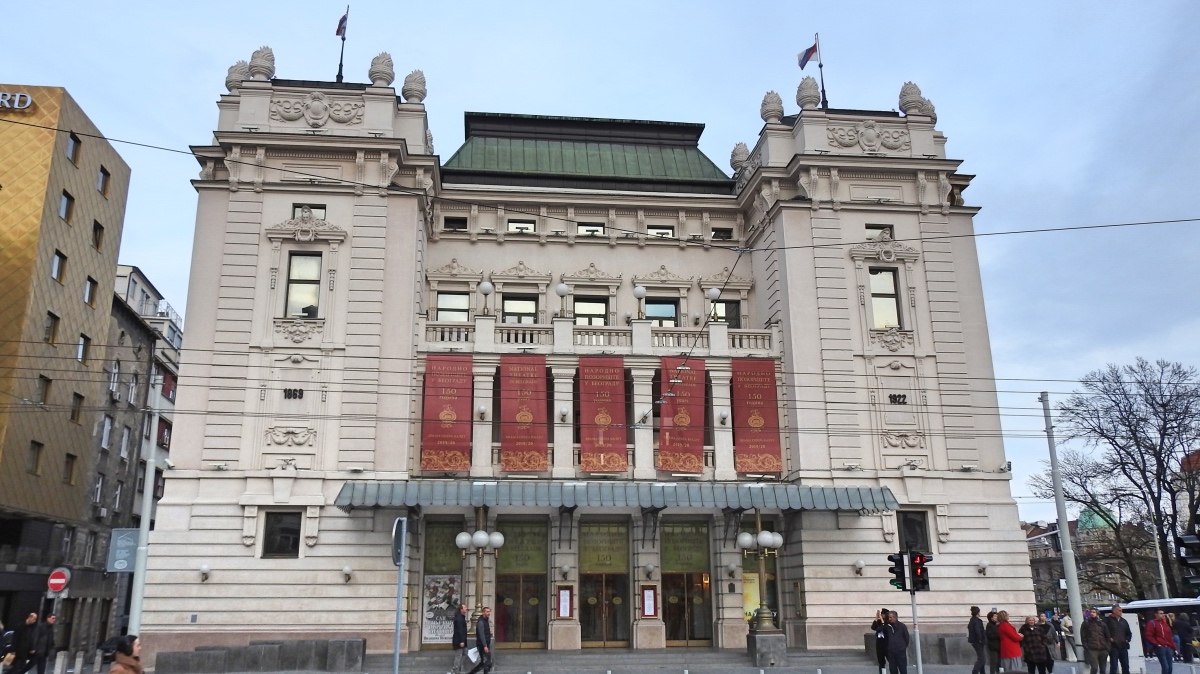 The National Theater, built in the architectural style of neorenaissance, is placed in the central city square, Republic Square, since 1869 (reconstructed in 1912, 1922, and 1989) and along with the equestrian monument to Knez Mihailo Obrenović and the National Museum, forms a cultural cornerstone of Belgrade.

Located at the site of the old tavern called "The Queen of England", temporarily adapted for the theather in 1868, where Knez Mihailo (eng. "Prince Mihailo"), three days before he was assasinated, promised to the people construction of the real and adequate National Theater. According to his wish, the National Theater was opened one year later. At the time of the construction, this was the most monumental building in the city. It was significantly reconstructed in 1922, after the Great War (WWI), when two towers were added. 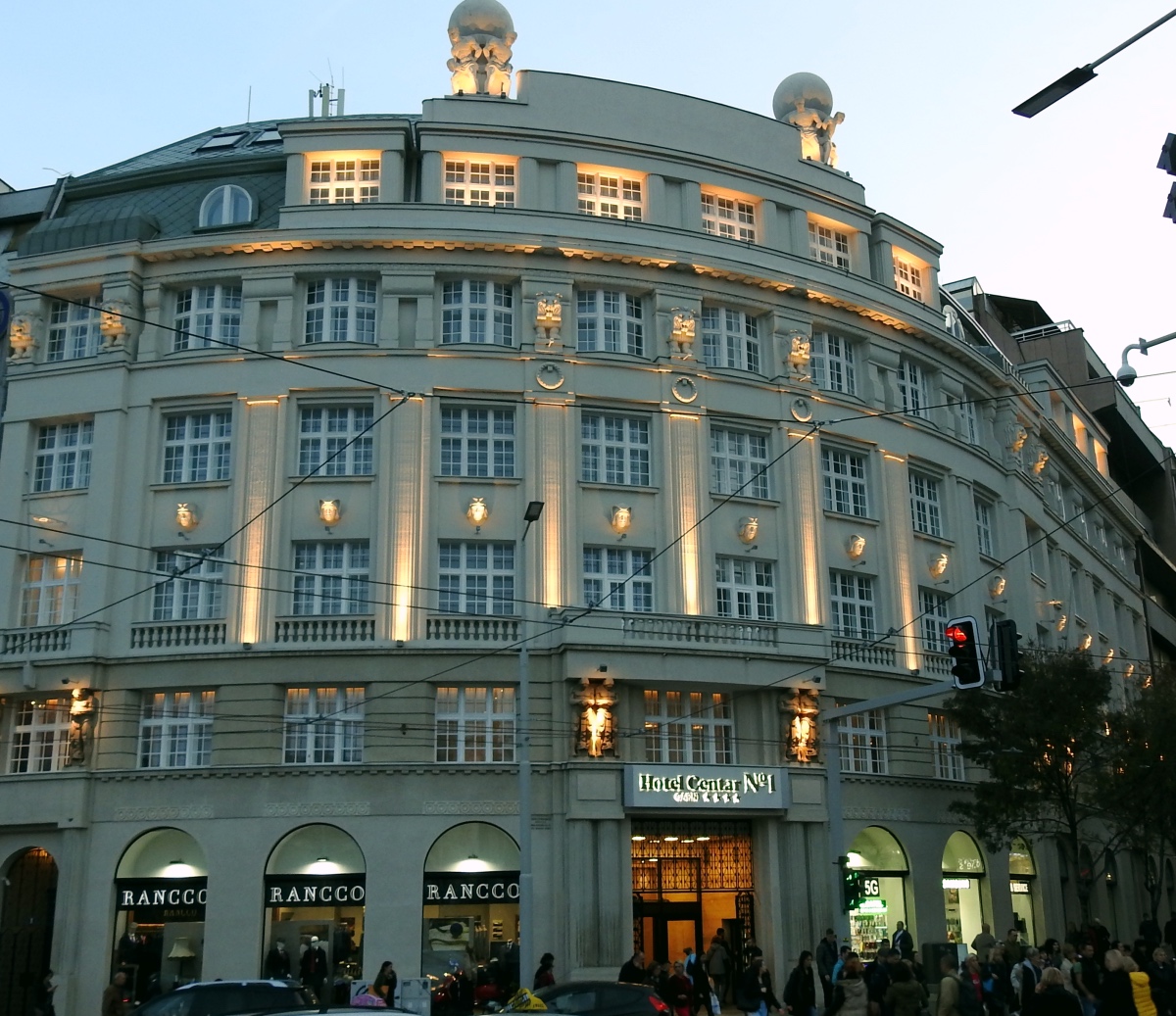 Originally built for the Yugoslav Bank in 1923, this fabulous but aesthetically problematic piece of academism in Belgrade's architecture, as some argue, after WWII was best known as the building of "Jugoexport" fashion company. It is located opposite to the National Museum.

At the time of its construction, back in 1923, this was the largest building in Belgrade. The facade of the building is ornamented with heads of men and women, and on the top there are figures of Atlases holding Earth. It is interesting that the men are wearing Serbian national cap called "Šajkača" and have long hair. The Czech sculptor (the whole project was carried out by Czech architects and artists) knew about this Serbian cap, but also read somewhere that Serbian medieval knights had long hair. So he put it together in an idealized representation of the Serbian man. 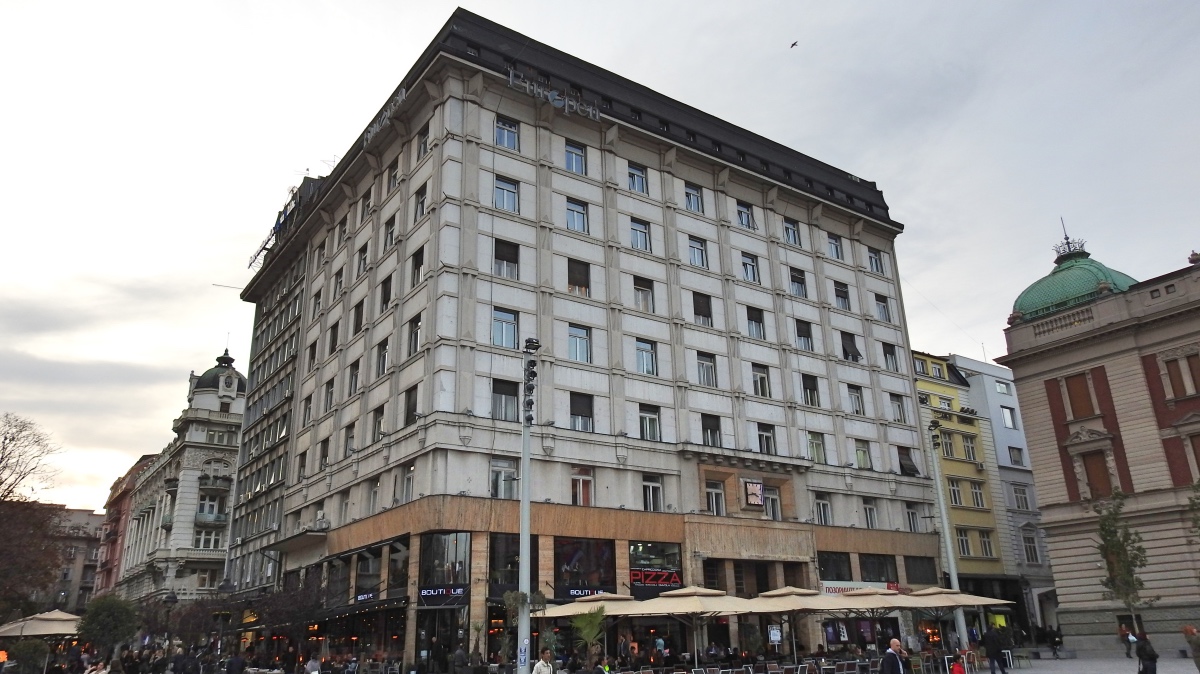 Palace "Riunione" is dominating the panorama of Republic square and, together with the House of the Press, is making a gateway to Knez Mihailova street. It is perfectly positioned beside the building of the National Museum of Serbia, and opposite to the National Theater. In the middle of these three magnificent buildings stands out the equestrian monument of Prince Mihailo Obrenović (ser. "Knez Mihailo"), as the central point of the square.

The name "Riunione" originates from the title of an Italian insurance company from Trieste, for which it was built in 1931. The building represents a copy of (or it was designed after) Madrid's headquarters of the company, in the architectural spirit of Art Deco. 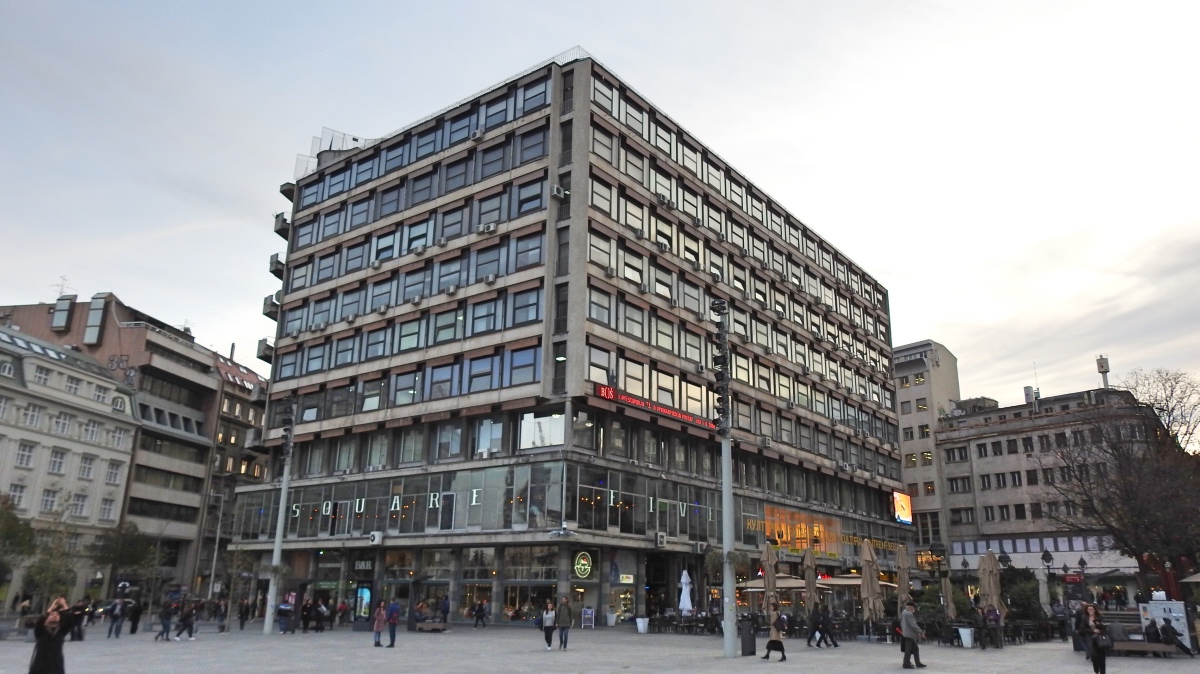 House of the Press

House of the Press (ser. "Dom Štampe") is one of two corner buildings (together with Palace "Riunione") that are standing one opposite to another, making a gateway from Republic square to Knez Mihailova street. At the time of its completion, in 1961, it was a very advanced "ahead-of-its-time" modern architectural piece, designed in the Corbusian spirit.

The building is pretty big, it is facing Republic Square from two sides, then Knez Mihailova street from one side and Kolarčeva street from the other. The International Press Center is located in the building, with big conference hall. Also many more companies, organizations and institutions are holding their offices there. The Belgrade Cultural Centre is occupying the first two-floors, with movie hall, a bar, an art gallery, a shop and many more features and amenities. 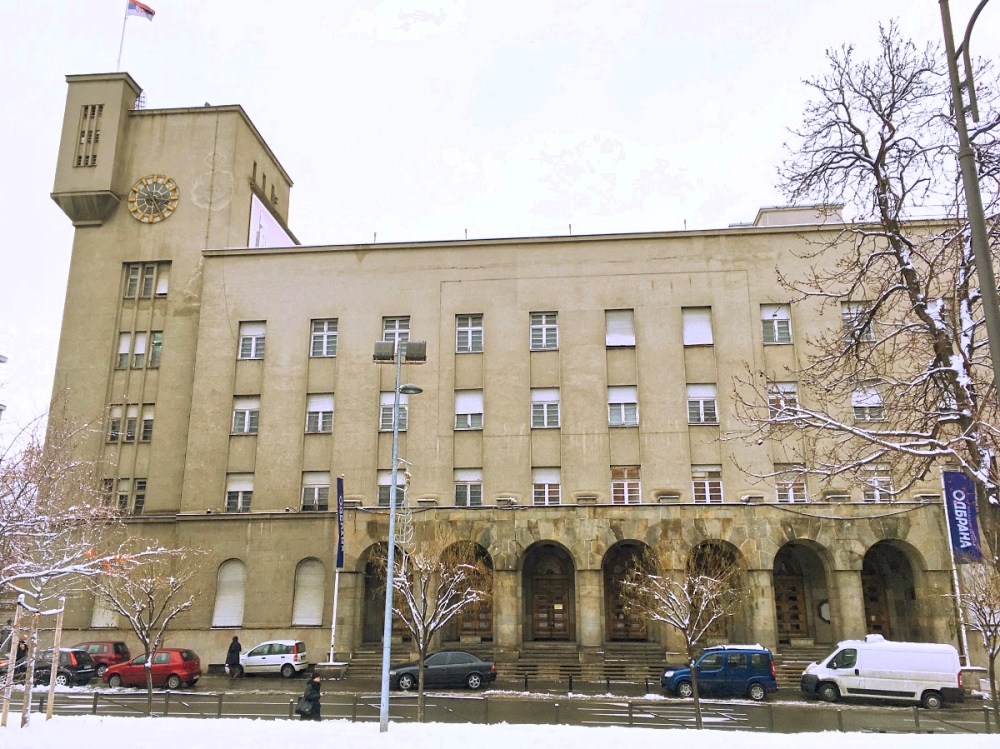 The building of the former Veterans' Club and later the Central Army Club really stands out in the panorama of the Republic square.

Built in 1931 as the central cultural meeting point of veteran army officers between two world wars, it served its cause until present times. Surprisingly, the building was constructed without any ornaments, strict and sharp, in the architectural spirit of modernism, and only with a watchtower that showed its "military purpose". Why? The other architectural proposal was more traditional, and tried to show strong national feelings and pride from victorious campaigns that Serbian army led in the Great War. But it was dismissed. The country changed. From the Kingdom of Serbia, to the Kingdom of Serbs, Croats and Slovenes, and ultimately the Kingdom of Yugoslavia. So, this modernistic approach was an escape from the Serbian tradition, introducing a faceless but politically correct style for the time of its construction, that all nationalities, now forming part of the new Yugoslav military, could be identified with and feel at ease. 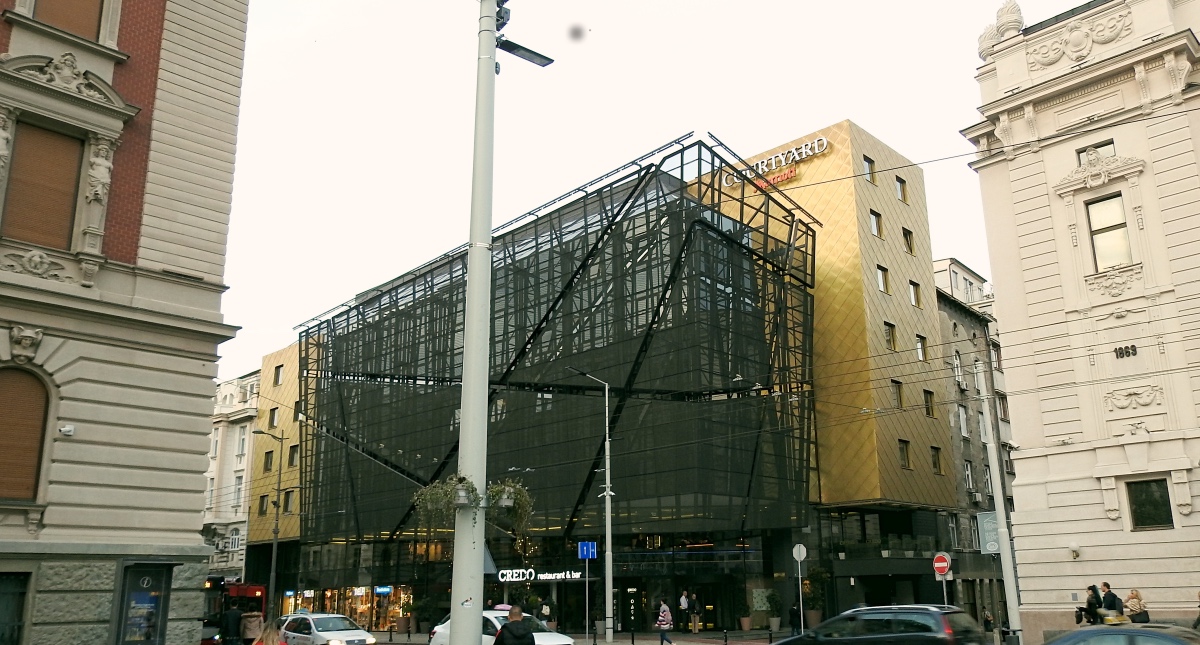 A luxury 4-star hotel was built and opened in 2015 at the most exclusive location in the city. Unique modern design looks refreshing in the surroundings of classical buildings in Belgrade's historical center. For more info visit the official web-site.