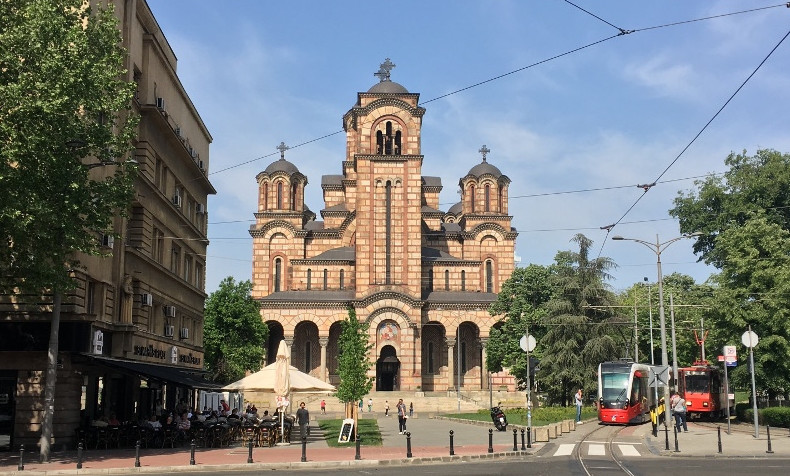 You can reach it on foot from Terazije Square in about 5 minutes (400 meters / 0.25 miles). The National Assembly of Serbia is just around the corner. Also, behind St. Mark's Church is located a small Russian-Orthodox church of the Holy Trinity, and further in the back are the headquarters of Radio Television of Serbia, national radio and tv broadcaster.

Today's monumental five-domed church was being built from 1931 to 1939, in Serbo-Byzantine style of architecture, designed after monastery Gračanica (built by Serbian king Milutin in 1321). It was projected that the inside of the church should be painted in fresco techique. But, because of the outbreak of the World War II, the works were halted. After the war, communist regime came to power and they were not interested in finishing this job. 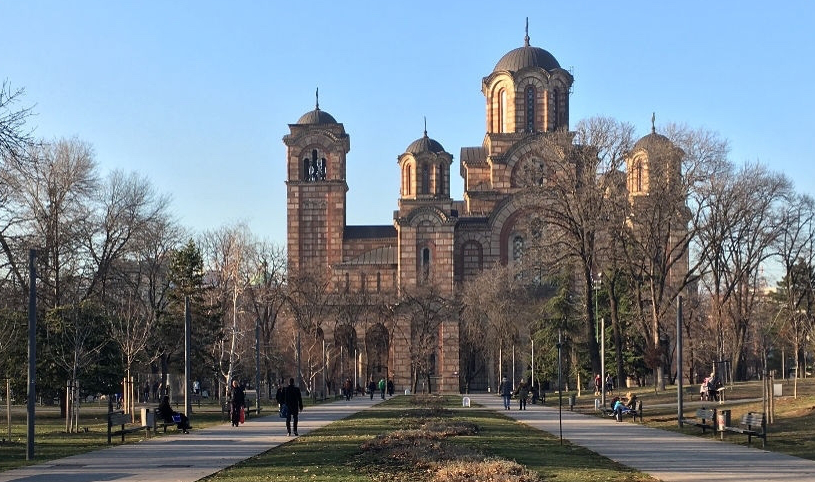 The church itself is monumental, 60 meters high. Really impressive. One of mysteries that surround this church is certainly related to the following question - why is it dedicated to St. Mark? Yes, he is a great saint, one of the evangelists, but in Serbian-Orthodox tradition he is not oftenlly mentioned. For sure, there are numerous saints more revered and celebrated in Serbia. In addition, St. Mark is, some would also say, more of a Roman-Catholic kind of saint. Well, maybe, in these times the Serbian-Orthodox Church counted on some sort of reconciliation with the Western Church, and naming it this way was the step in that direction. But, we don't know that for sure. Certainly, it is peculiar.

In 2017 the works were resumed and one portion of the ceiling (the apse) has already been painted in mosaique, depicting the Virgin Mary without Christ (he is represented in the medallion on her chest). 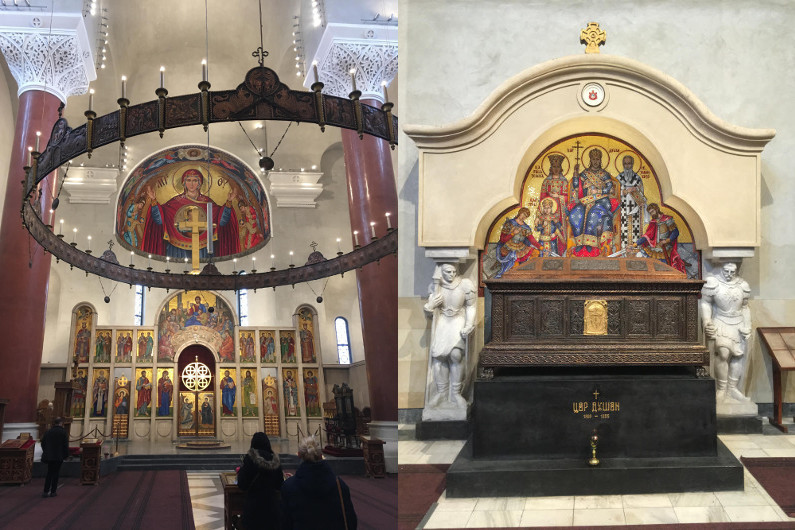 In the crypt of the church, still not finished and functional, there are tombs of several Serbian orthodox bishops, as well as of King Alexander Obrenović and his wife Queen Draga, last rulers of the dynasty Obrenović, killed in the May Coup of 1903.

After you finish exploring the church, you can take a walk, have a cup of coffee or even a lunch in a wonderful Tašmajdan Park. 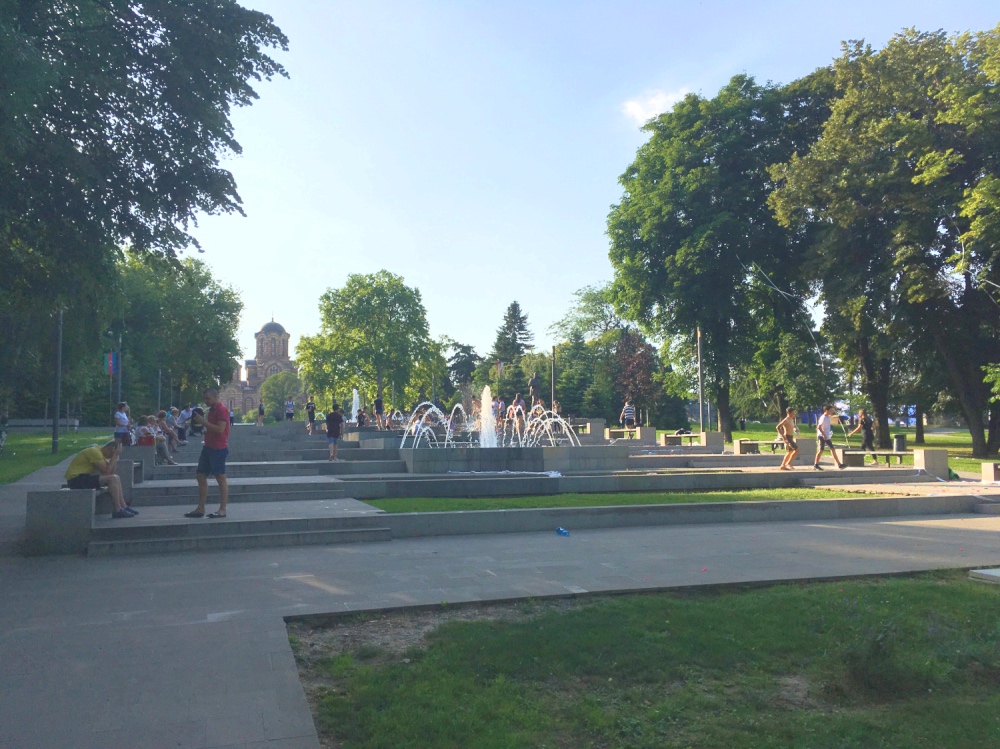 Tašmajdan, one of central parks in Belgrade, is located no more than 150 meters from the National Assembly. The name of the place "Tašmajdan" is of Turkish origin and it means "quarry", as it is believed that the Romans pulled out rocks from this place and used it, among other things, for building the Belgrade Fortress in the old days.

Because of that, beneath the park is a very complex way of tunnels, that served for different purposes over the time. It provided refuge for Serbian rebels during the First Serbian uprising against the Ottoman Turks in 1806, for example. Serbian Orthodox Church is using some of the underground facilities for safeguarding their relics, and Nazi-Germans had their warehouses there throughout the course of the World War II. From time to time, some of the tunnels open up to the visitors. More info about visiting Tašmajdan tunnels you can find here (info available in Serbian only, for now).

In the first half of the 19th century on the spot of today's park was the cemetery, which was moved by the beginning of 1900's. However, a large number of graves were left in the ground. The plans for constructing the park were made before the WWII, but only in 1954 it was officially open. Some of the headstones that were left from the cemetery were used to pave the surface, especially the steps, and it was visible to the sharp eye. You could notice years of birth or death under your feet as you stroll through the park. 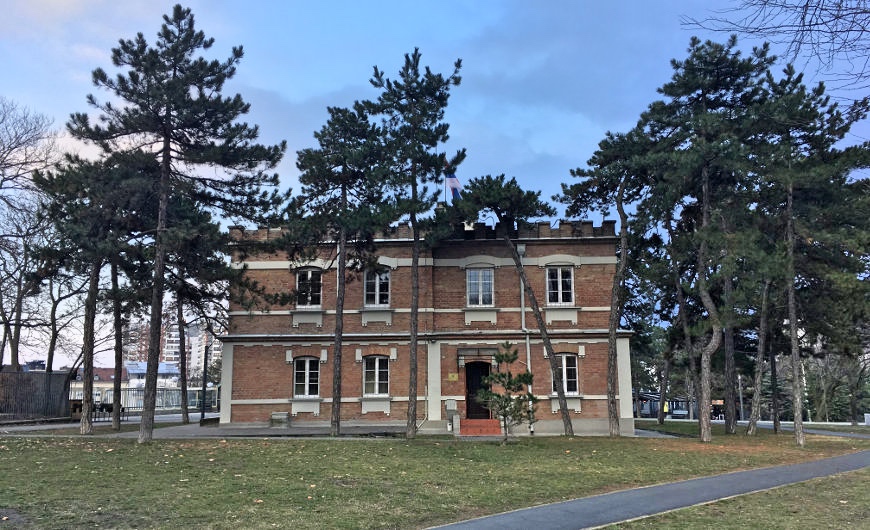 In 2011, the park was renovated with the donation of the Republic of Azerbaijan. It got a new surface, with children playgrounds, a small dog park, a large chess board for "human chess" with chess tables, tracks for jogging, a "singing fountain", and two monuments - to Serbian writer Milorad Pavić and to ex-president of azerbaijan, Heydar Aliyev.

But still you will get the sensation of walking over the graves, as those were never moved from this place.

St. Mark's Church (Christian-Orthodox church, photo on top) is located in the outskirts of the park. Probably the most beautiful church in Belgrade, it represents a true Serbo-Byzantine style of architecture.

On the plateau, in front of the church, a small monument to one of the most beloved Serbian Patriarchs, Pavle (eng. "Paul"), who died in 2009, was placed.

Serbian emperor Tzar Dušan (1308-1355), the most powerful Serbian ruler who spread state borders throughout the Balkan peninsula in the 14th century, is buried inside the St. Mark's Church. 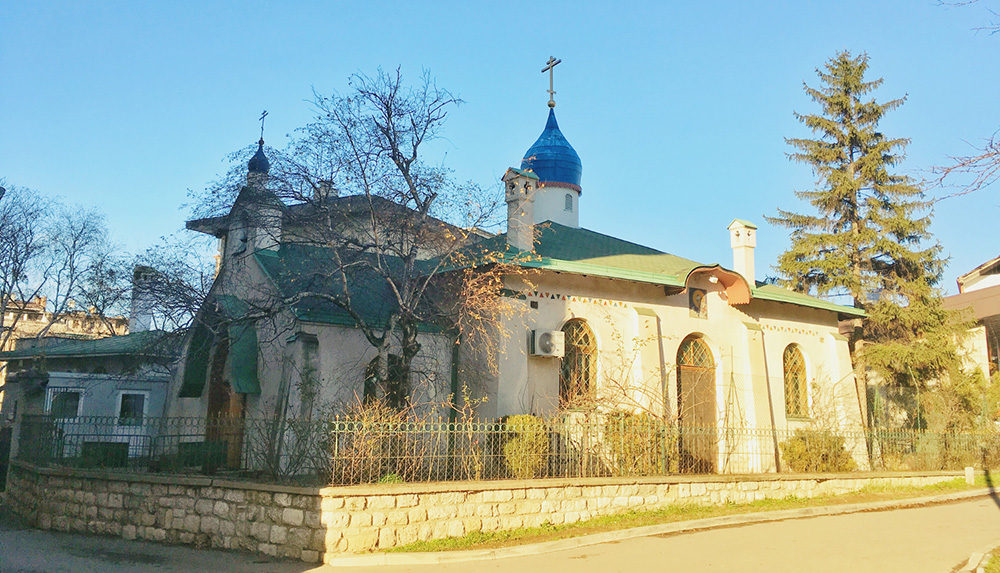 Russian-Orthodox Church of the Holy Trinity

Behind St. Mark's Church, a small Russian-Orthodox church of the Holy Trinity is located. The church was built in 1924 by the Russian emigrants who fled motherland after the October Revolution in 1918. Almost 50 000 of the so called "White Russians", loyal to the emperor and the defeated regime, settled down in the Kingdom of Serbs, Croats and Slovenes. Many of them found their home in Belgrade. The church represented the country that they lost. And it was the place where they gathered to remember it. It was built quickly, without any ornaments, moderate and pretty small. But stiill, it fulfilled the purpose of provoking nostalgic feelings. It resembled enought to the ones back home. Symbolically, they laid down a clod of Russian soil on the foundation of the church.

The headquarters of the Radio-Television of Serbia, the official public TV and Radio broadcaster, are also situated on the border of the park. 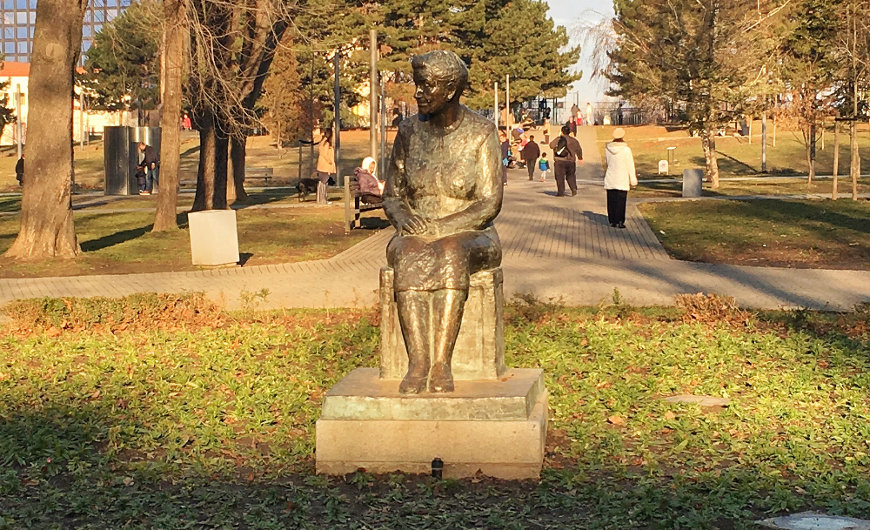 Leaned on the hill of carved stones lies "Tašmajdan Stadium", a place where you can ice skate during the winter, play basketball during the springtime and summer, listen to concerts, or watch all kinds of different sports events under the clear (or not so much) sky above.

In the park, there are several bars and coffee shops with nice gardens, where you can relax and have a break. There is also one of the most famous restaurants in Belgrade located at the outskirts, towards King Alexander blvd., with a beautiful garden and a nice view on the park, called "Madera", where you can have a lunch or dinner.

Crossing Beogradska street, near the fountain and the Faculty of Law, you'll find yourself in Mali Tašmajdan Park (eng. "Little Tašmajdan Park"), which is logically part of this whole area, but still it is considered as an independent section. 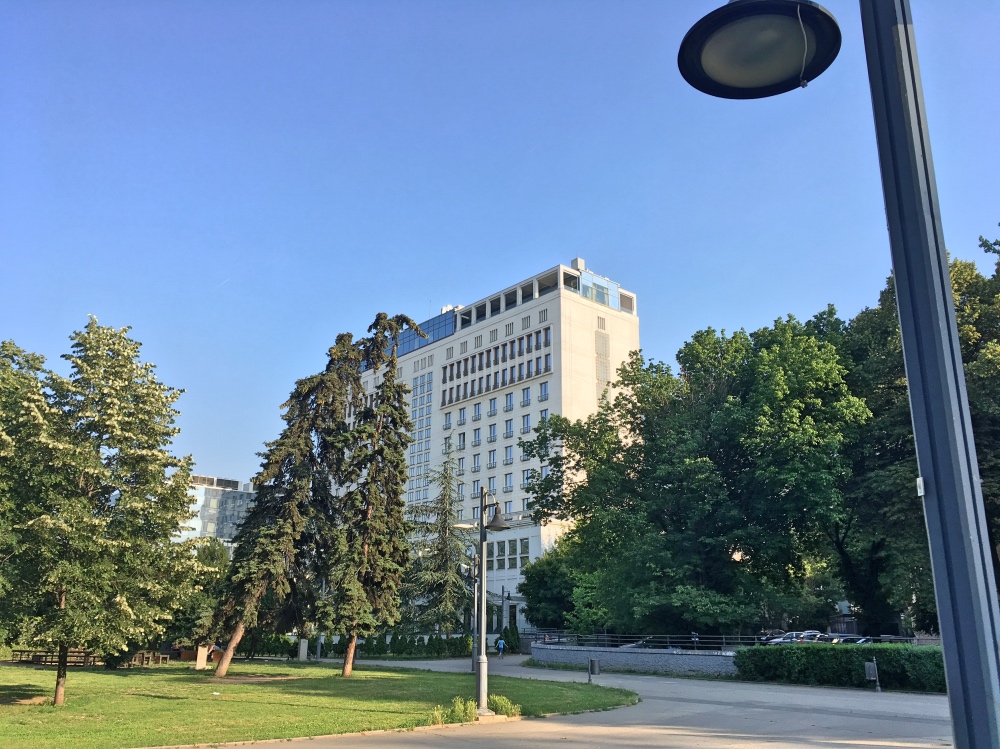 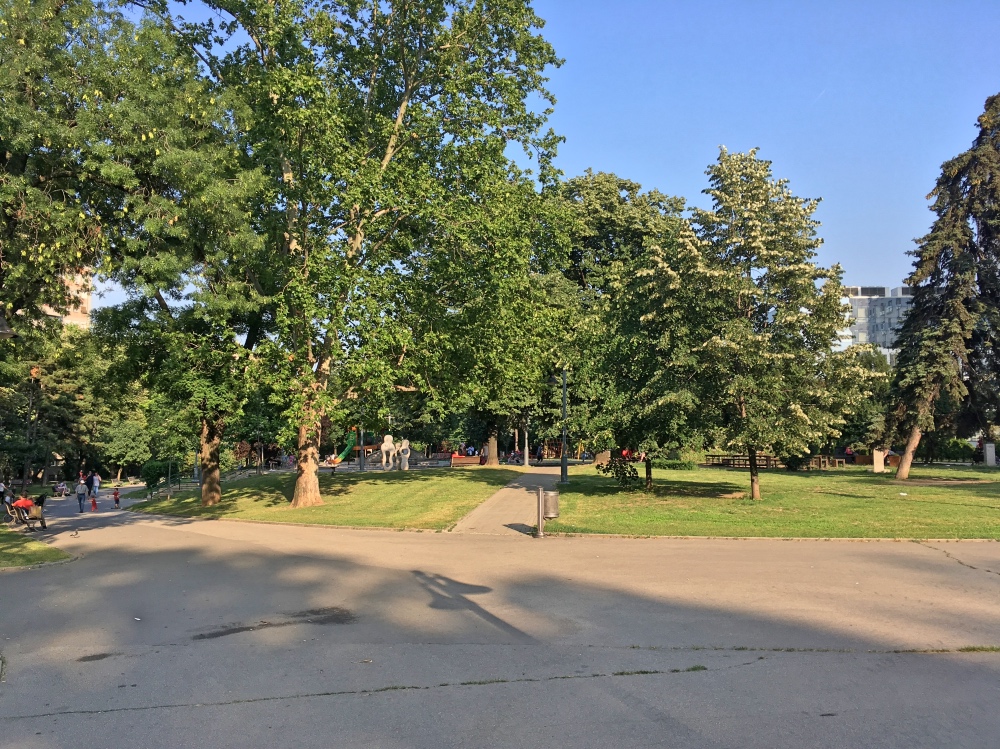 There are several characteristic edifices at the outskirts of the park, such as Faculty of Law and "Metropol Palace" hotel on one side, and the buildings of the Archives of Serbia and Faculty of Technology on the other, adjacent side. 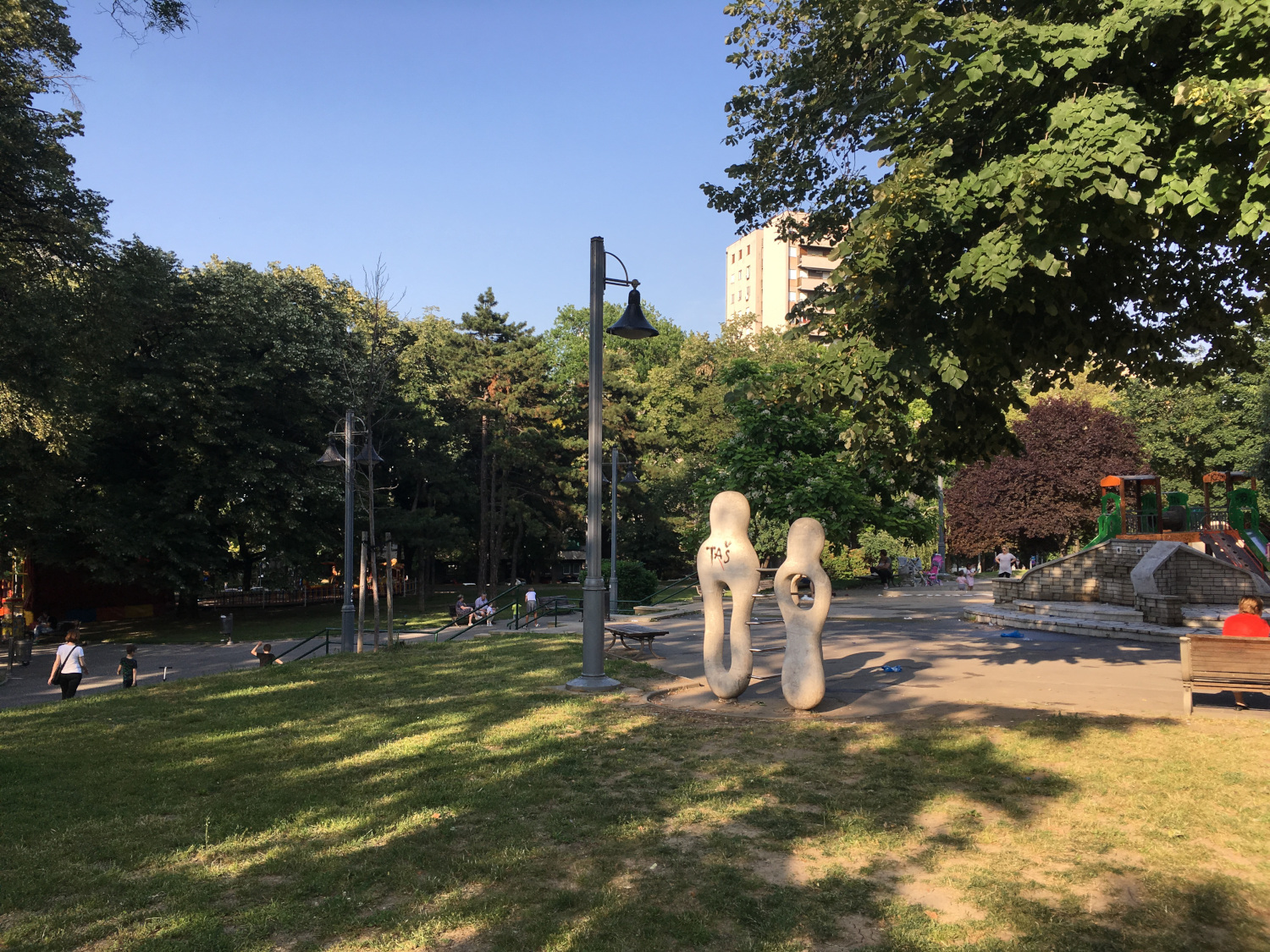 The park itself is significantly smaller than Tašmajdan park, but still there is enough space for a walking, for sitting on one of numerous benches, or for the children to play. There is a small playground for kids in the center of the park.