From the end of the world to the heart of the Balkans - Hola Serbia! 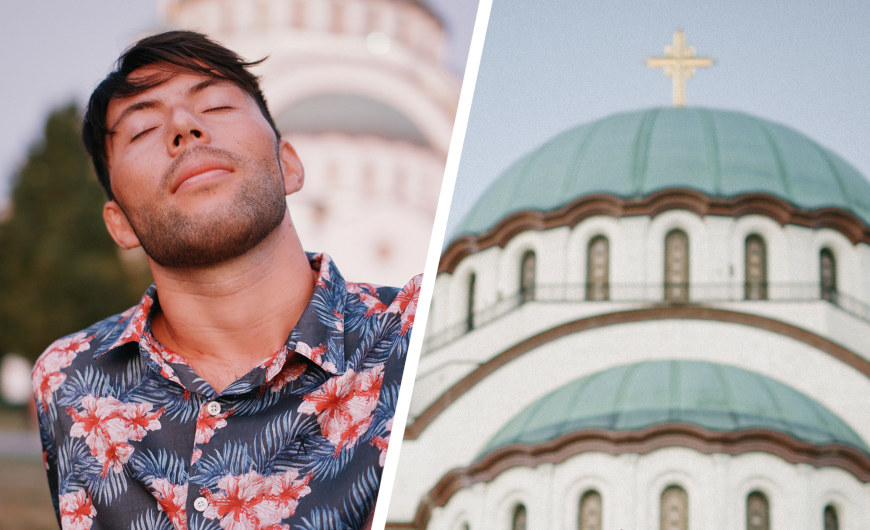 My name is Ezequiel Videla, I am Chilean 🇨🇱 and a passionate traveler who lives these days in the heart of the Balkans, in Serbia. I want to present Serbia to the Hispanic world and invite you to get acquainted with my story and explore with me this wonderful country that surprises Latin Americans so much. HOLA SERBIA!

Yes. My father used to tell me about Yugoslavia when I was a kid. He loves history as I do. From the very beginning, during my childhood, I felt a big attraction for maps, flags and cultures. My mother figured it out when I used to spend my free time – I was seven years old, reading an old book of carriers which also contained an extended list of phone codes, countries, languages from all over the world sorted by alphabet. In those years, Yugoslavia was there, in the European continent, and Belgrade appeared as its capital. On the other hand, I knew about the history of its name: Beograd, which means “the white city” in the old Slavic language. I even started to feel some attraction for this group of languages, which is the reason why I started to learn Serbian when I was back home, in Chile, with a native teacher via the internet.

A new life. Well, I did not have great economic expectations, both here and in all the Balkans. It is known that this part of Europe is somewhat backward in many areas compared to Western Europe, but there is one thing that for me has not yet been lost as result of the rapid advance – I like the social life.

It is well known that Eastern Europe lives the life in its own way and social life is an important indicator for people here. Life here is hard; often, people are having even two jobs because the monthly salary is not enough, but the Balkan people will never lose the essence of social interaction and joy of life. While in Western European countries people go home after work, here people go for a coffee with friends, hang out in the city and plan what to do next, no matter what day of the week it is. Even in Chile, my country, which is considered one of the most developed countries in South America, this indicator is going down as a result. Social life is one of the most important aspects in our society nowadays and I think that Serbia and the Balkans still offer it. 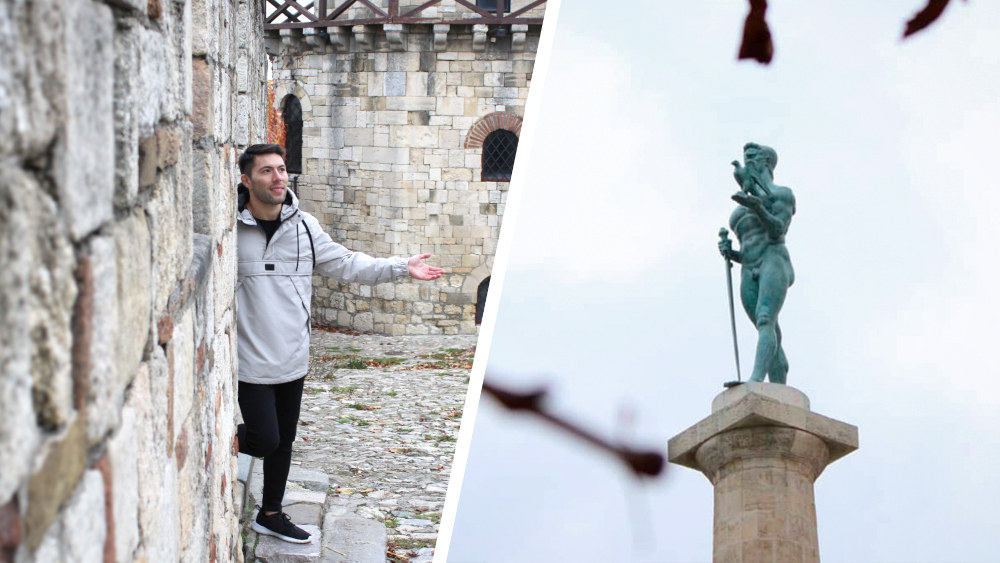 The local hospitality. More and more, the Serbs are being recognized as an extremely friendly and hospitable people. Every year, foreigners, motivated by curiosity, unusual destinations or simply desiring to explore the Balkans, are coming to Serbia. Not surprisingly, they later write in their travel notes or make videos on how they were well received by locals in every aspect.
I am also a witness of this. I am a passionate traveller and I constantly travel all around Serbia. Every weekend I used to travel to some new place. I have met wonderful people on the road, who have invited me to have a cup of coffee, talk about our lives or to simply share our experiences. I always come back to Belgrade, my current home, with unforgettable and priceless memories. People are always surprised when they figure out that I moved here from the end of the world – Chile, and that I speak the Serbian language. That’s true! From the end of the world to the heart of the Balkans!

On the other hand, almost all countries in Latin America speak Spanish and it is well known how particular and “hard” the Chilean variant is. It is very complicated for foreigners, but it is what it is. It was a big surprise for me when I realized how many people here understand or speak Spanish and they can even understand my variant of Spanish! Then I realized that many Mexican telenovelas were broadcast here for a long time. Hey, “amigo”! How are you doin`? They always say that!

Of course: love. I fell in love with Belgrade at first sight in 2016. Next year I came again and this travel confirmed that the city had already overwhelmed me. So, I decided to learn more about the country and even its language. In 2019, I moved to live here. If this is not love, what would it be?

EoB: What do you dislike about Belgrade?

I did not expect that something like traffic jam would disturb me here. I mean, I’m a Chilean from Santiago, with almost eight million people, but here the traffic jam is something serious. Maybe a metro could improve this situation? I miss a metro here!

Santiago of Chile is nowadays a multicultural city. Due to the rapid economic growth of the country, Santiago is the meeting point and goal for many foreign neighbours such as Venezuelans, Colombians, Peruvians, Bolivians, Argentinians and so on. As a result, Santiago and its inhabitants have experienced this massive migration for the first time in its history. In my opinion, it is something positive and an advantage because, we Chileans, also enrich ourselves as a nation. Let’s not forget that we were a very restrictive and conservative nation during a heavy military dictatorship that lasted for almost 30 years. I hope this cultural diversity continues being well received by all Chileans so that everybody can learn from each other.

On the other hand, Belgrade and Serbia as a nation, also know about this subject. The events that unfortunately occurred here in the past have left for sure more than a simple lesson. Belgrade is a proof of that. Not only local people live here, but we can also find Montenegrins, Bosnians, Croats, Hungarians, Albanians, Russians and so on. This is the real spirit that we, as countries, should develop. Tolerance is a big driving force of change and will take us to the next level as a society. I think people here, slowly but surely, are going to adopt this idea and it is something I like. We as nations can learn so much from the mistakes of the past.

People here are very friendly, especially with tourists. Let’s not forget that Serbia emerged from a difficult moment in its history not a long time ago, which is why I think the rest of the world stayed away from this point on the map. However, today Serbia is a new country that shines and welcomes you with open arms. People here know that and return this gratitude to the tourists in this way. It is very probable that Belgrade would be the first point of contact if you come to Serbia and that its local people will offer you their help whenever needed. No language barriers here!

EoB: Could you live here?

I have been living here for two years already and I do not have plans to go back home, to Chile. I fell in love with Serbia and Belgrade. I want to explore even more the heart of the Balkans and I feel I am on the right path, which is the reason why I travel around the country to show it to the Spanish-speaking community abroad through the material I make in @hola.serbia, my Instagram account. I constantly receive good impressions about my adventures here and not only from the Latino people but also from the Serbs living abroad. A simple “hvala sto pokazuješ moju zemlju” (Thanks for showing my country) is enough and priceless for me. During this year I have been working hard on two projects. One of them is focused on the heritage and history of the Second World War in the Serbian territory and the other on exploring the southeast of Serbia, a very enigmatic region which attracted my attention from the very beginning. Let’s do it! 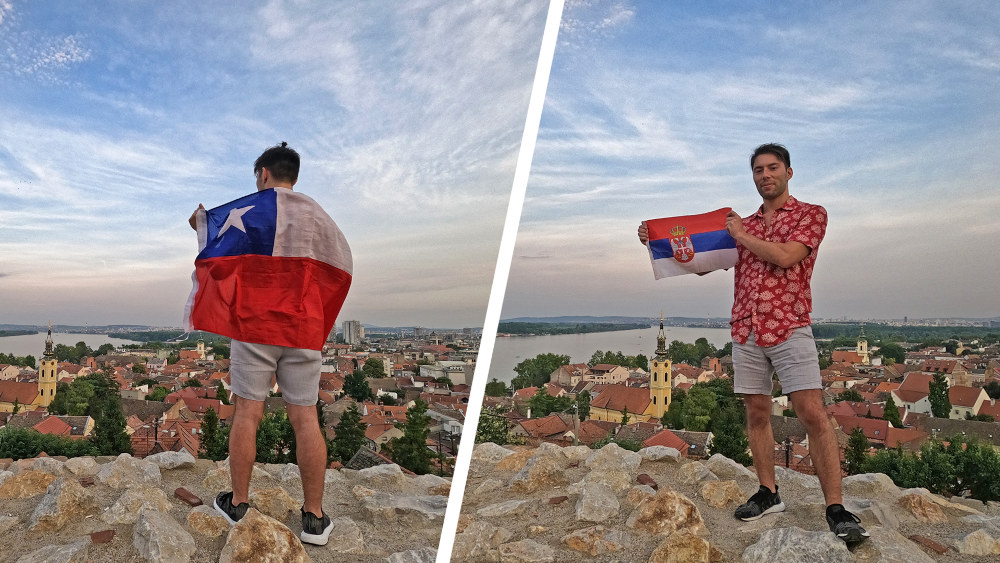 EoB: Give us the name of one city anywhere in the world you think is similar to Belgrade (no matter if you visited it or not, give us your impression).

“Izvinjavam se, ali Beograd je Beograd, nema šta!” Belgrade is Belgrade and I could not compare it with any other city at the moment.

It is a funny story and I remember it like it was yesterday. During my first Balkan trip in 2016, I planned to go to Sofia, Bulgaria, from the main train station in Belgrade. After the check-out at the hotel, I tried to go there on foot, but in one moment, I figured out that I was completely lost in the city. No internet, cold and windy, heavy rain… At this moment, I thought that I would miss the train. Suddenly, the first thing I saw: a parked ambulance in front of me. I asked the driver how to get there because I was very late! He told me: “Come here, I will drive you there”. What a surprise! I said: “That is the famous ‘Balkan way!’” We spoke on the road about football. Marko was a very good guy and I did not miss my train to Bulgaria that day. Thanks a lot, Marko, if you are reading this!

(all photos courtesy of Ezequiel Videla)