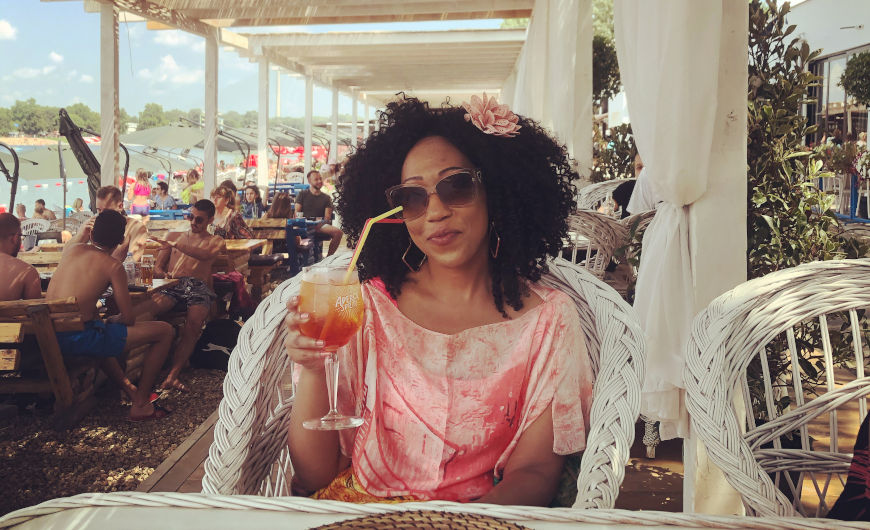 My name is Samantha but people know me as Trek Star Sam, that's the name of my YouTube channel and also my Instagram account, in case you want to look me up. I am from San Francisco, California, I am in my 30’s and I arrived in Belgrade about a month ago. I’m an English teacher, so I am teaching English here and really enjoying my time.

This is actually my fourth time in Belgrade. The first time I came to Belgrade was in 2014. I was teaching English in Turkey and I wanted to go to a country that was nearby and easy to get to, so my friends suggested that I go to Serbia. So, I decided to come to Serbia. The first time I came, I was actually very nervous to tell people I was American because that was the same year they had the World Cup in basketball and it was Serbia and the United States in the final, and we, Americans, ended up winning that tournament. So, I was very scared, I was thinking that they would be very angry that we beat them in a basketball game, but everybody was very nice and friendly, and they didn't seem upset about the basketball. I had such a nice time. Then, I came back to Serbia two more times. One time I just spent about 24-hours 'cause I had a long stopover. I was going somewhere else. Last time I came here in October 2019 to do some videos, because I have a YouTube channel where I featured Belgrade in a couple of my videos. I went down near the Danube river and some of the "Splavs" (eng. "riverboats") and the bars and restaurants down there, to take some photos and do some filming, it was really nice and the weather was beautiful so I decided that I want to come back next year. So, here I am. 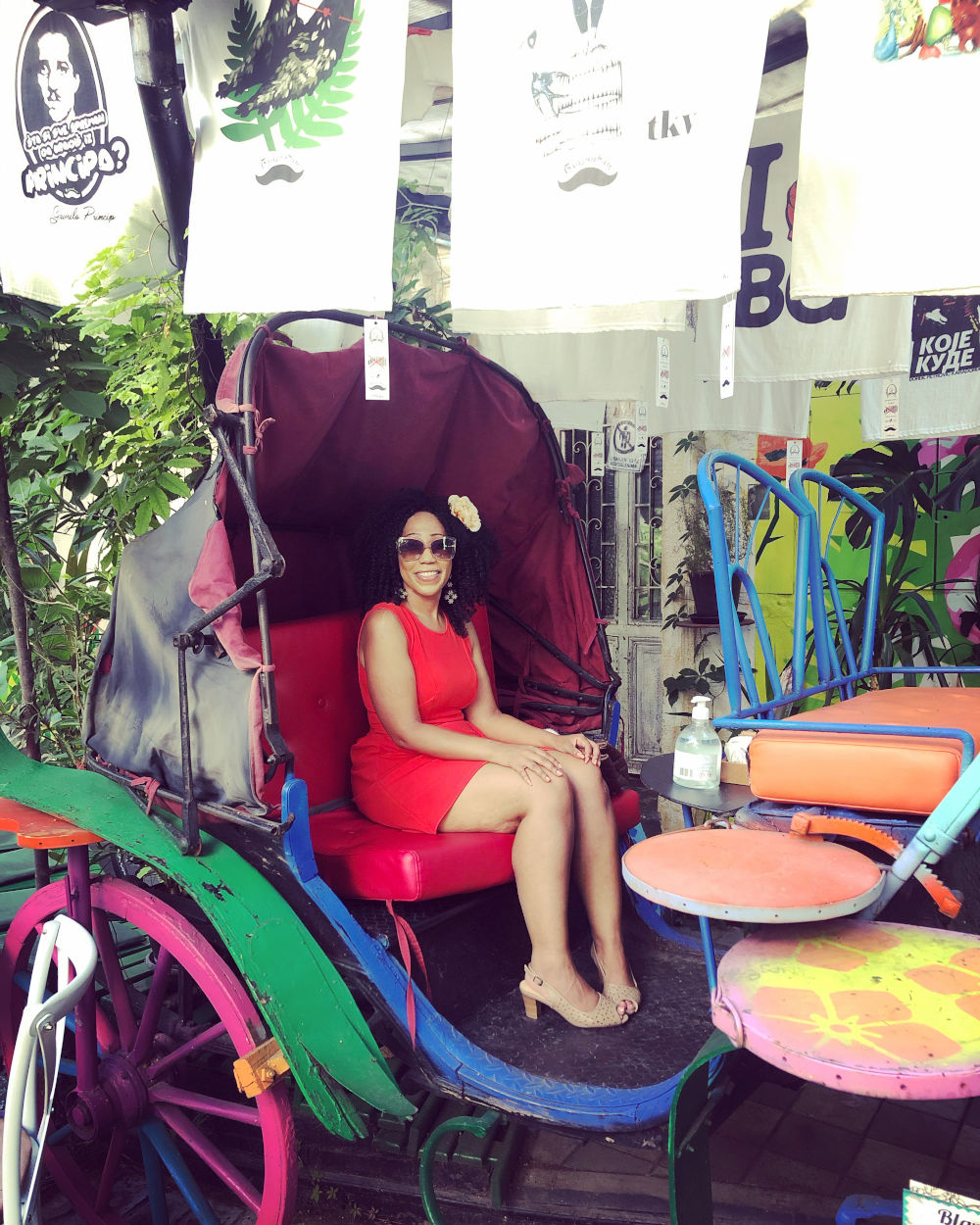 What I expected to find here, in Belgrade, was good food, interesting people, good weather, pretty much low cost of living and I found it all. Basically, the people are lovely, the food has been wonderful, and the cost of living is relatively very low compared to San Francisco, where I am from. The weather has been very nice every time I've been here. It was raining a few times, but it has never been drastic, the winter wasn’t severe at all when I was here, so everything that I was looking for I found in Belgrade.

So, when I first came here, beside the Airport, obviously, the first thing I've noticed was that everything was so calm. I came late at night, around 11 o’clock, and I’ve noticed that it was very dark and not so busy during that time in the center of the city. I've noticed that it was very safe, and I was hearing different things about Belgrade at that time. People were saying, ok maybe it's not safe to walk around at night but one of the first things I've noticed was that it was safe. I didn't feel scared or anything. There were not any gangsters, you know, lurking around, waiting for me to take the wrong turn. Anything like that. So, I would point out safety as one of the key features of Belgrade. 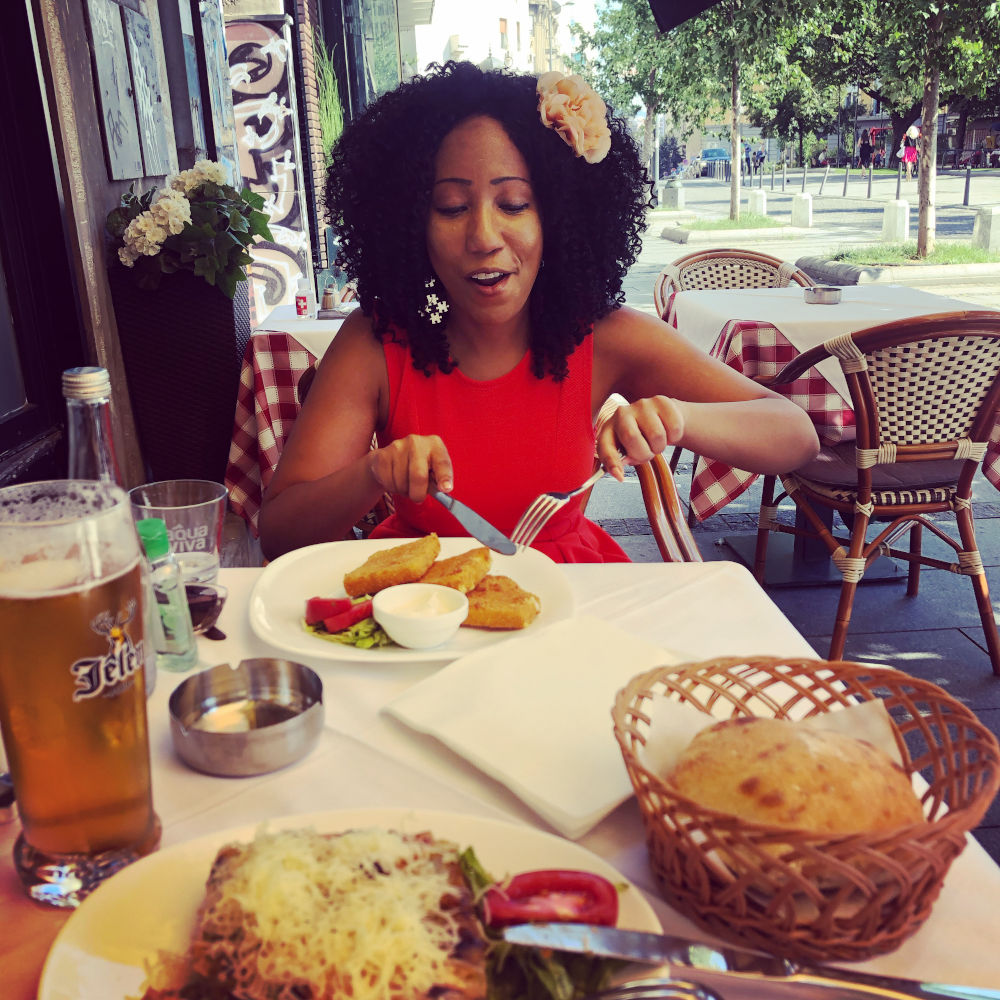 Belgrade is amazing. Lot’s of amazement here. Most people don't know very much about this area, like the Balkans and Serbia, and so I researched a little bit before I came, but I wasn't expecting it to be this nice. I wasn't expecting the city to be this well developed, so I was really shocked and, arguably, it is on par with the majority of other European cities that I’ve been to, and even some American cities. It's even better here than in some little towns in America, so I wasn't really expecting that. I was very amazed when I saw how nice things were, and how clean everything is. 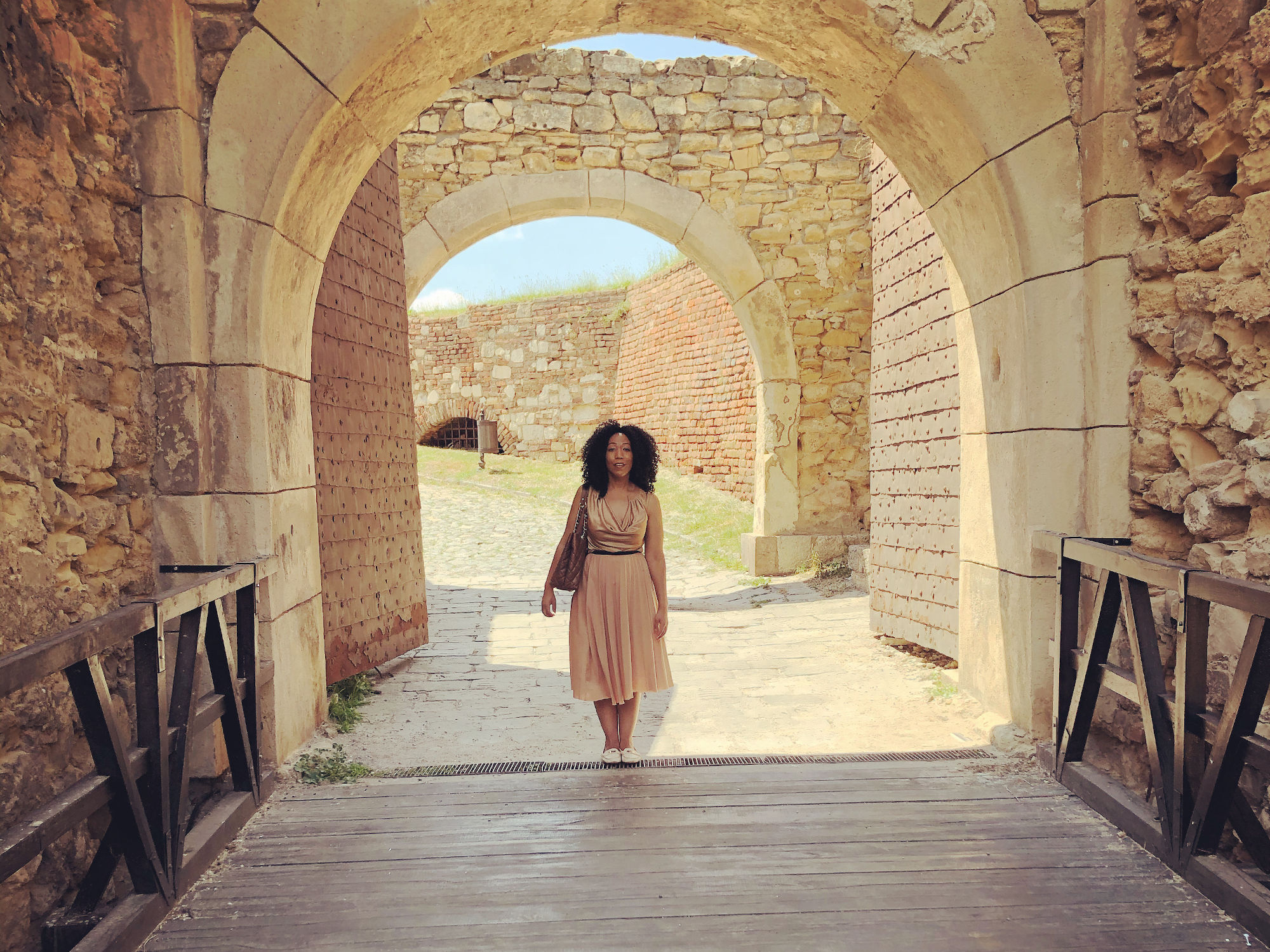 The only thing that bothers me is the indoor smoking that, definitely, I wish people would stop doing. In the summer, it is ok on the outside, in the terrace, but in winter everybody smokes inside, and every time I go out to a restaurant or something like that, I am thinking what's the point of showering and washing my hair 'cause I'm just going to smell like a smoke factory back at home, so if they can stop this smoking indoors, i would appreciate it very much, and it would be also very, very healthy.

Comparing Belgrade to my home town, San Francisco, I've noticed that both have hills. San Francisco is a bit more of a hilly city, but here they have hills as well, not so steep, though. It kind of makes me feel at home with hills around. As for the advantages Belgrade has over San Francisco, it is definitely the cost of living. Back home people are now paying 3000 to 4000 dollars a month for a one-bedroom apartement, and here in Belgrade you can get one in the center of the city for about 500 euros, which is completely unheard of in the USA. So, that’s definitely an advantage Belgrade has over my home town. 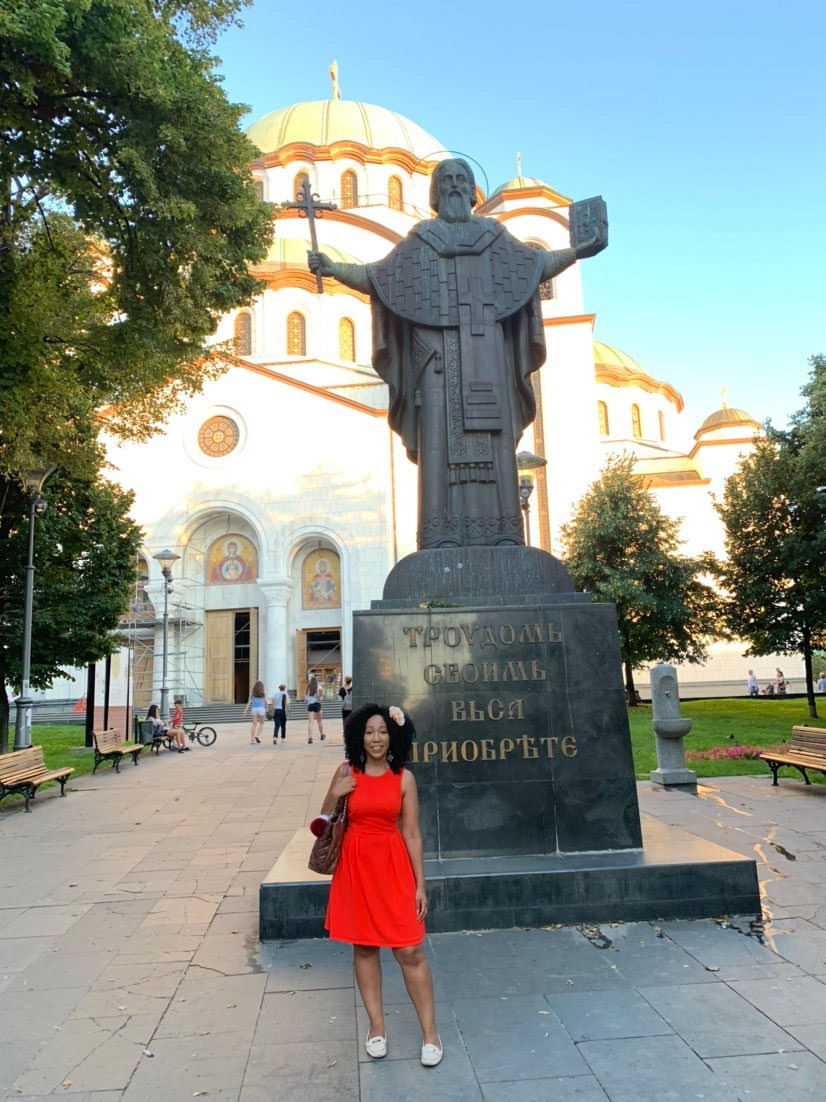 If you like four seasons it is definitely nicer to live in Belgrade, because in San Francisco it's pretty much from 12 degrees Celsius and maybe 22 to 24 all year. We really do not have seasons. We have a beach, but it's the Pacific Ocean and the water is cold. We also don’t have any fresh water lakes, so we do not have nice beach going experience in San Francisco. Of course, you can go but it's going to be different experience than being over here, at Ada Lake for example.

Also, in San Francisco we have so much nationalities living. And I love ethnic cuisine, and lots of restaurants, like Indian food, Turkish food, Thai, Vietnamese etc. There are some over here in Belgrade, but not as many as in San Francisco. I like different ethnic cuisines, even though local food here is wonderful, I sometimes do miss like Vietnamese, Indian, Burmese food and things like that.

My first big impression of Belgrade were bombed buildings, 'cause when I did see them for the first time it was like in 2014, when I came on my first holiday. I was on a walking tour and of course they had to take us by there, and I was a little bit shocked because when that happened in 1999 I was really a kid back then, or rather a teenager, and of course we heard about that in the news but you are far away and you don’t really see the devastation until you actually come to the country and see for yourself. And you are like: "Goodess gracious! So, that’s what happened during that time!" And it wasn’t clear back then, and now it became much clearer. 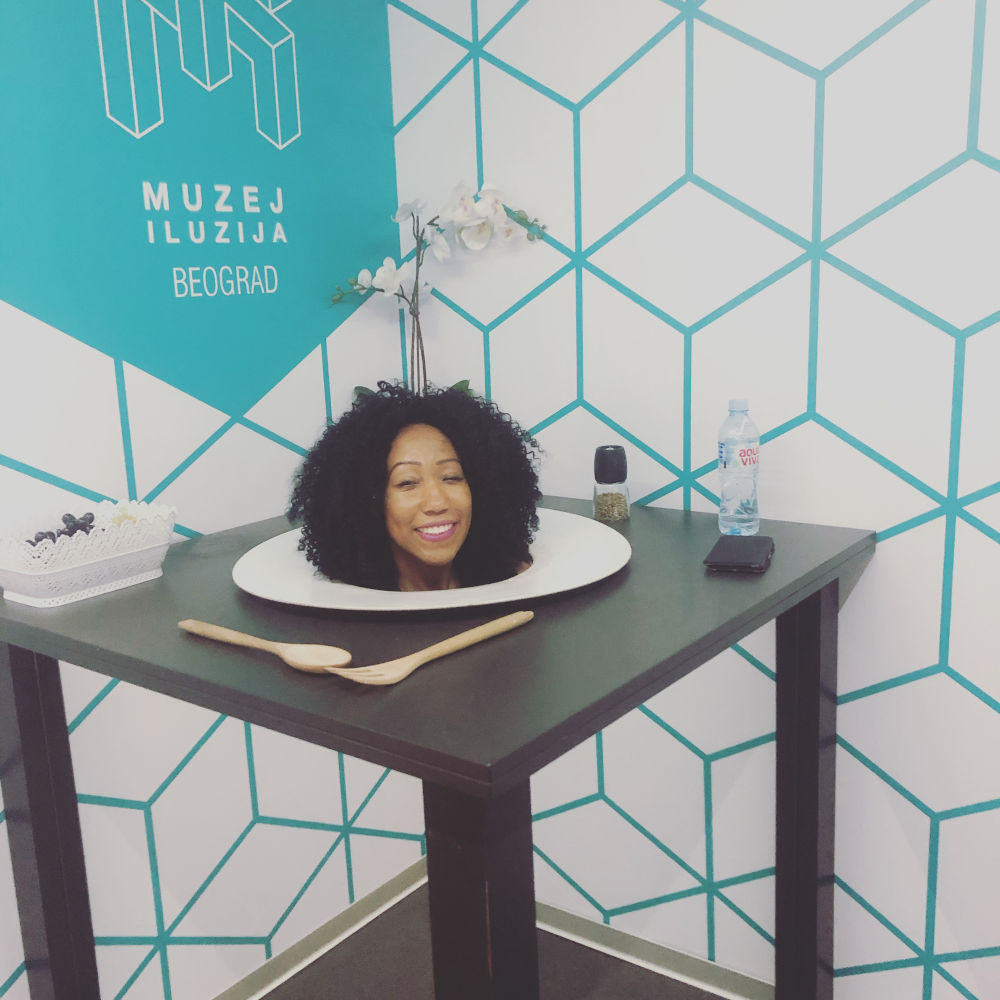 The people in Belgrade so far have been wonderful, I haven’t had any bad experiences, everybody is so kind, nice and friendly. The people speak English very, very well, I haven’t felt any racism, and I am very happy here. So far, so good. They love to tell me about their country and culture, I get lots of recommendations, things to do, places to see. I think I could live here. I am not sure about the winters, though, as I am from California and we get uncomfortable anything below 12 degrees Celsius. And I know it can get colder than that, but I've lived in colder places, so I could definitely live in Belgrade if I have chance, and one day maybe I’ll look into it.

Belgrade seems to be similar to Zagreb, in Croatia. It is bigger, but the vibe is similar. Of course, it was one country back in the day, so maybe it is because of that. I prefer Belgrade, for sure, it’s bigger and you have more things to do. I would definitely return to Belgrade, and I will. I love it here, great weather, great food, great people, pretty low cost of living but high standard of living, and I would like to stay longer next time.