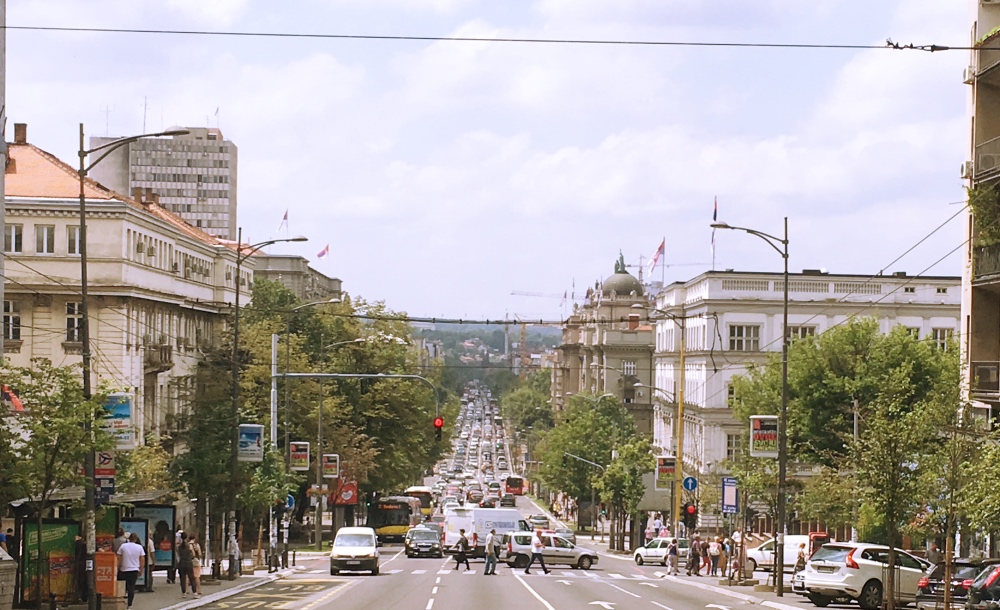 Kneza Miloša street is a large avenue that connects city center with the highway. It goes for about 1.5 kilometers, from the National Assembly to Mostar interchange.

The street is named after Knez Miloš Obrenović (Prince Miloš, born in 1780, died 1860), who led the people in the Second Serbian Uprising against the Ottoman Turks (1815-1817), which resulted in gaining the autonomous status of the Serbian lands and consequently a full independence.

Upper part of the street starts at the Main Post Office and the National Assembly of Serbia, at the intersection with Nikola Pašić square, King Alexander blvd. and Takovska street. It borders Pioneers Park, and make an instersection with Andrićev Venac and Krunska street.

State administration offices are located in this street, such as the Ministry of Finance. The Generalstaff headquarters were located there, but were severely bombed in 1999 by the NATO Alliance, and the remains are still visible, as well as former Yugoslav Ministry of Defense. Also, many embassies were/are placed in this street, such as German, Croatian, Polish, Canadian and the US (before it was moved to another location).

At the end of this avenue, if you do not go to the highway (access directly to E-75/E-70, going north to the Hungarian/Croatian border, and south along A-1 to the city of Niš), you may continue further to Košutnjak and Topčider parks, or make a left to go to the Museum of Yugoslavia, Josip Broz Tito Mausoleum, FC Partizan stadium, Dedinje district (with luxurous private villas) and the royal White Castle. 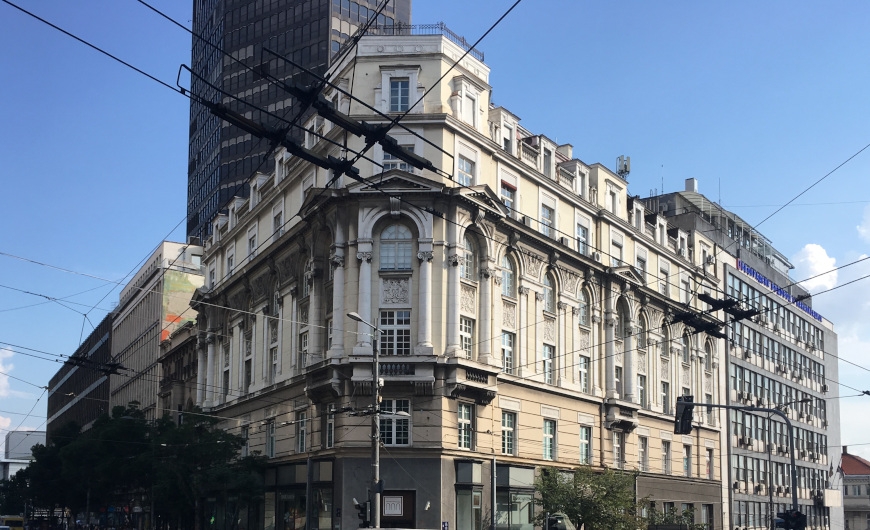 The building that now lies beneath a tall Belgrade Palace skyscraper needed to be built in order to give the final shape to what is commonly known as "London square", at the crossroad with Kralja Milana street.

This building finally gave shape to the popular London square, after construction of the Old Vračar Savings Bank, diagonally, and the Old "Jadransko-Podunavska" Bank across the street. The old, much smaller house of Dimitrijević family needed to be replaced and the family had to take a loan to fund the whole project, that was demanded from them by the City authorities. It was an architectural challenge as the land slides down Kneza Miloša street, so it is not strange that the whole structure is uneven, vertically, and horizontally not symetrical with the main entrance at the corner. But still, it represents a fine example of Belgrade academism in architecture. 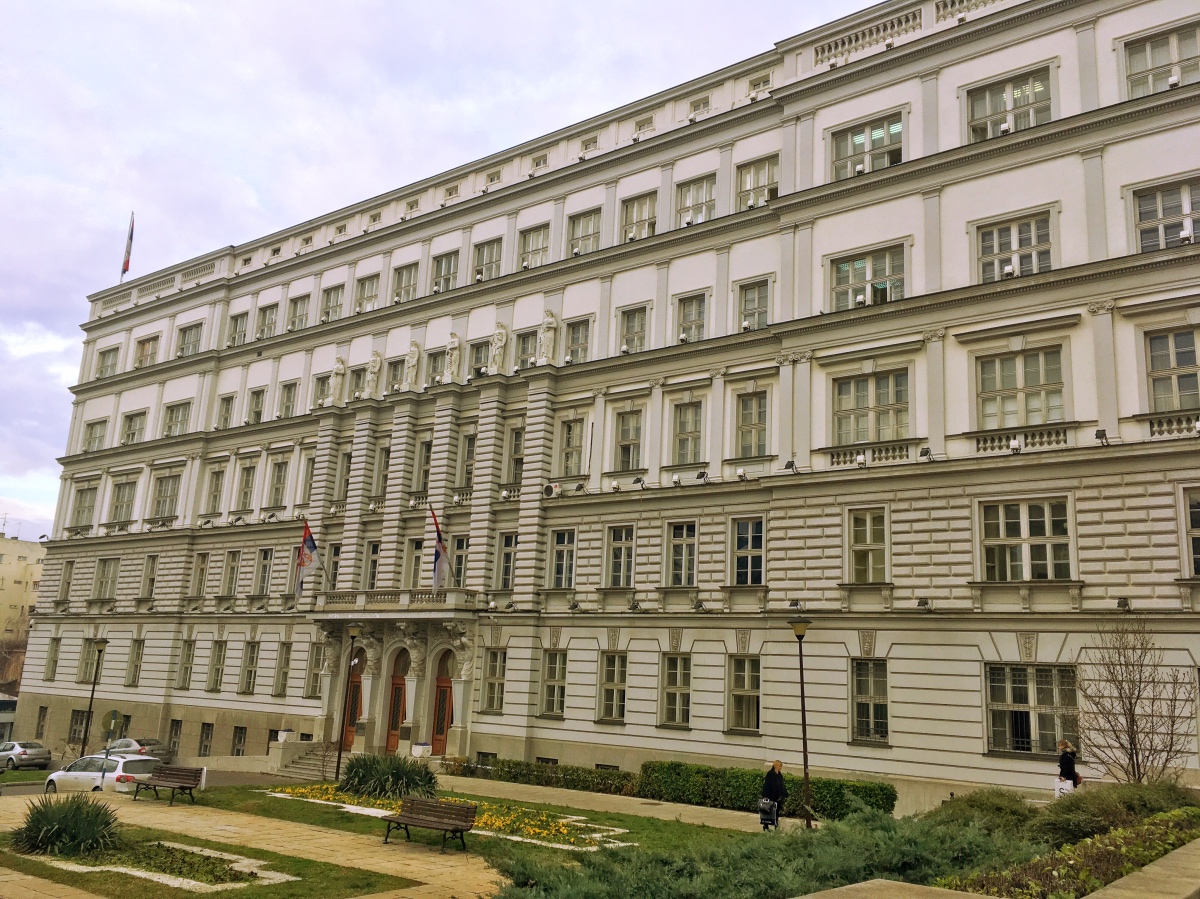 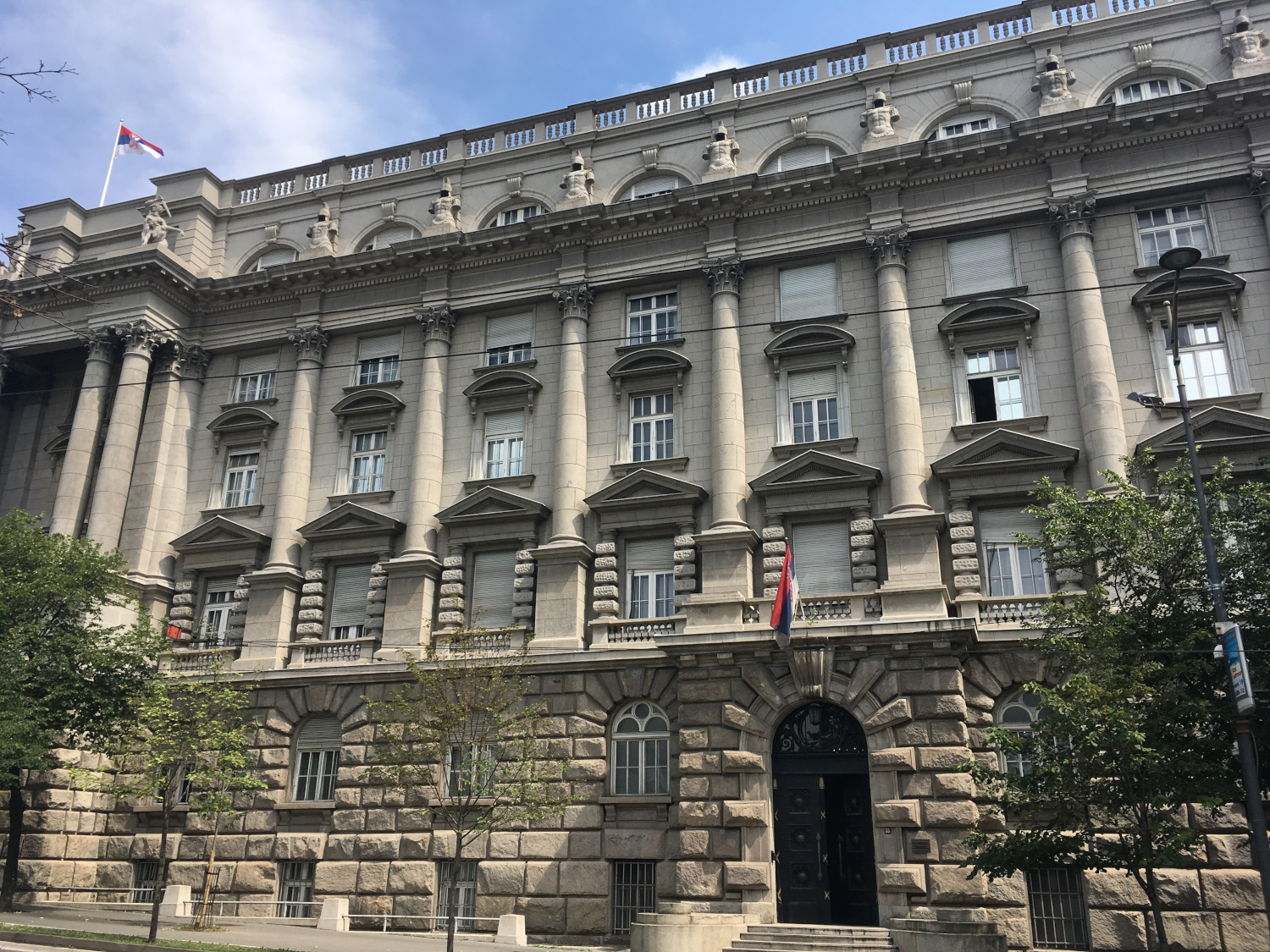 A monumental building designed by well-known Russian architect Baumgarten, also called "Baumgarten Palace", was home of the Generalstaff throughout the 20th century. It was voted the most beautiful building in Belgrade between two world wars.

Wilhelm Fedorovitch von Baumgarten was Russian emigrant who came to Serbia in 1920. He was obviously of German origin, but he declared himself as Russian. He was also a nobleman. But the most interesting thing is that he was an army general and an architect at the same time. And they say that this dichotomy of his nature is visible in his work. 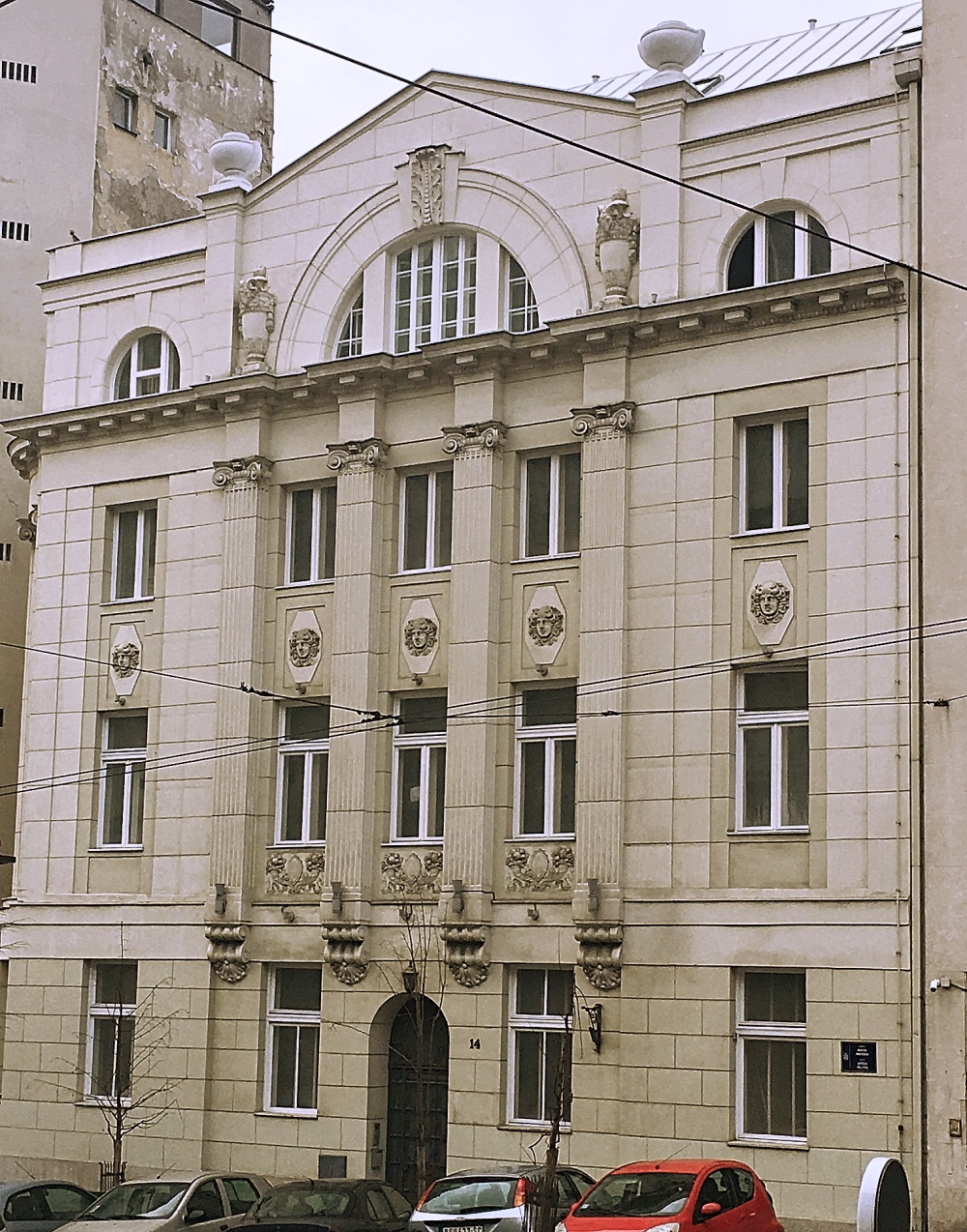 This building represents one of the masterpieces of the famous Russian architect Nikolay Krasnov.

Architecture: in the spirit of Academism

During the WWII it was converted to a brothel by the Nazis. After the war, the Cuban Embassy was placed in its premises. Then it served as the headquarters of the Hellenic Cultural Center, and now it is the Public House Hotel Belgrade. This exclusive 4-star hotel has no more than 19 rooms. even so, it is very high rated and in demand.

Find out more at the official web-site. 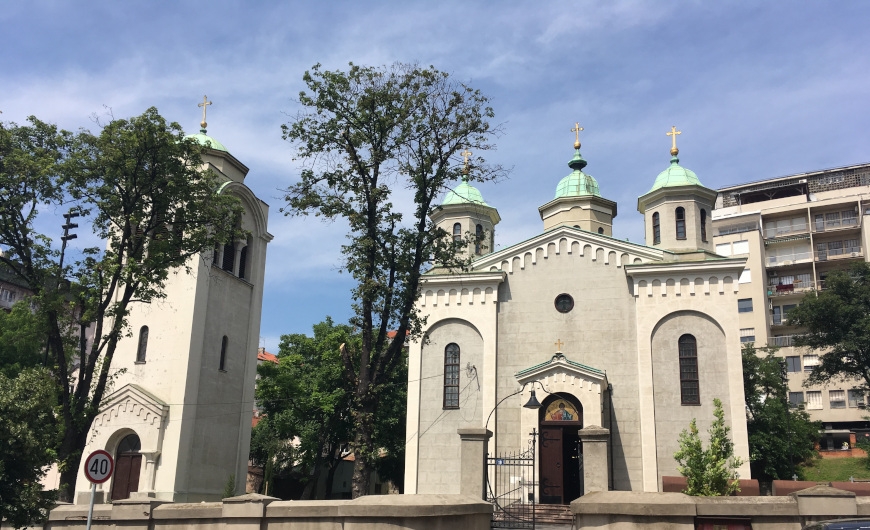 Vaznesenjska church ("Church of the Ascension") was built in 1862, during the reign of Prince Mihailo Obrenović. It is a five-domed church with detached bell tower.

It is situated in the center of the city, near 101 meters high skyscraper "Belgrade Palace", in the vecinity of Kneza Miloša street and Gavrilo Princip Park.

It was designed after Ravanica monastery (1377) in central Serbia (built in the style of Moravian school, the ultimate period of the Serbian medieval art), but modernized in the spirit of 19th century Romantisicm. 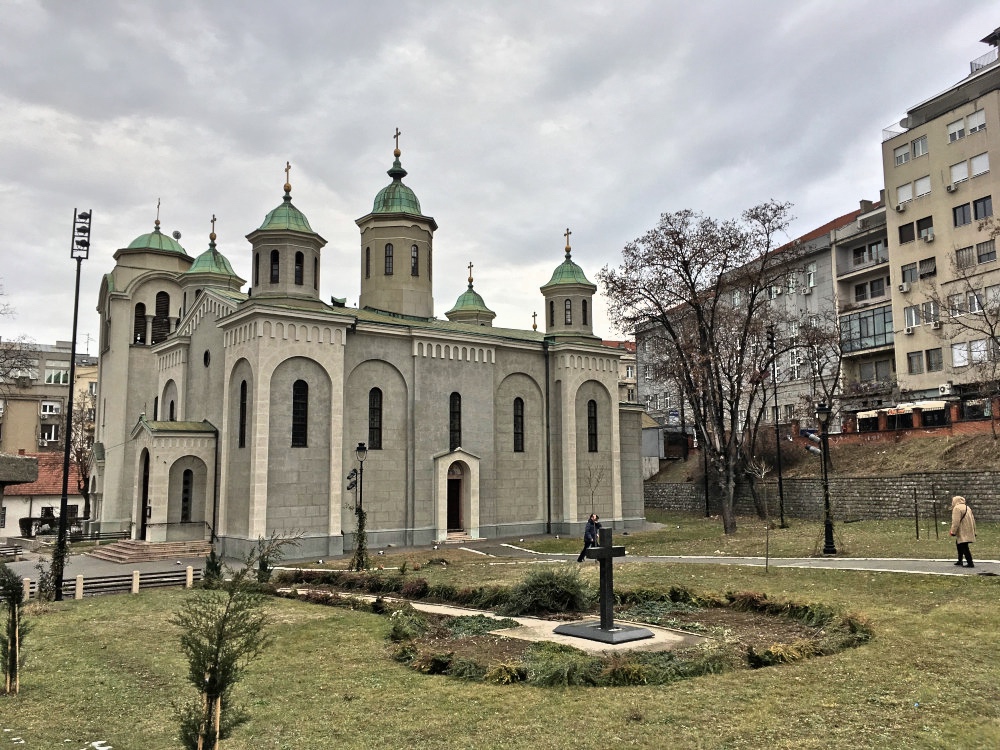 One of the major assets of this church is one of the church bells from 1830, that rang during the proclamation of the Hatisheriff, which granted Serbia a full autonomy from the Ottoman rule.

In the immediate vecinity is located so called London square, and down Kneza Miloša street you can see the magnificent old building of the Generalstaff, and reach Nemanjina street, with wonderful palace of the Serbian Government at the corner.