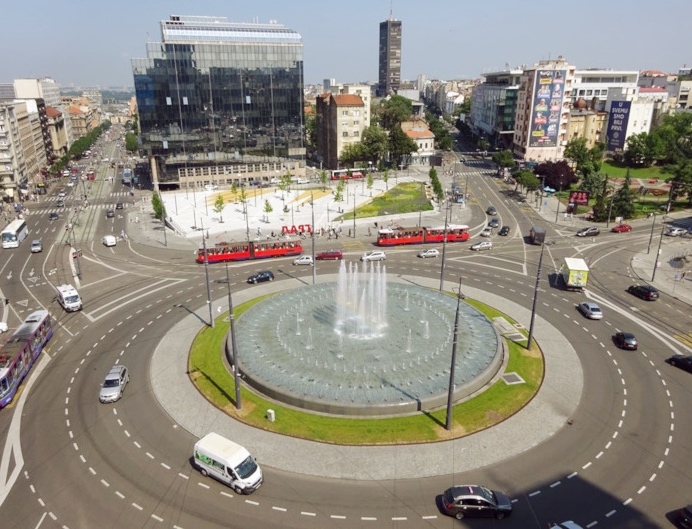 One of the main points of traffic in Belgrade is located at Slavija square roundabout. From this spot there are roads virtually in every direction of the city's urban area.

On the spot of the present Slavija square, in 19th century and before, it was a large pond, which ultimately naturally drained. This was the place for wild duck hunting, before it was converted to an urban area. The development of this part of the city began in the late 19th century when Scotsman Frances Mackenzie bought a significant piece of land there for further urbanization and built his own house. In his honor, one street (next to Hotel "Slavija") that goes from Slavija square further to Vračar district is bearing his name.

The roundabaout was built only during the WWII, which is kind of interesting. 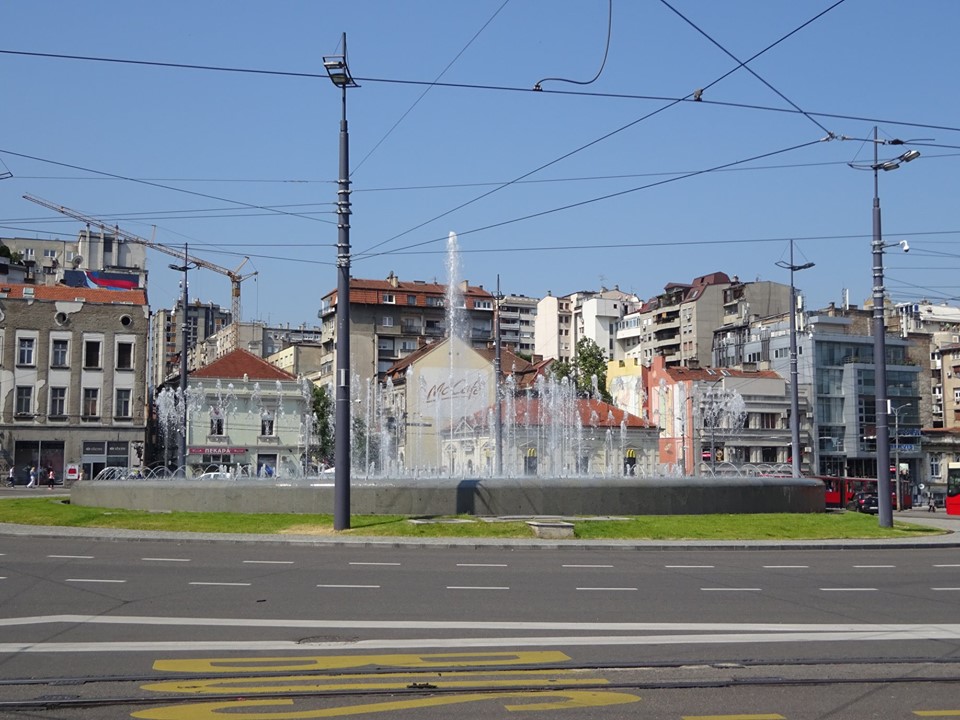 Slavija square is connected directly to Terazije square by Kralja Milana street (eng. "King Milan street"), which is approx. a bit more than 1 km (0.6 miles) of distance so it is fairly reachabale on foot (10-15 minute walk).

From Slavija square you can get to the famous St. Sava's Church in about 5 minutes on foot.

Beside a large Hotel "Slavija", at this square is located a modern building (in glass) of the National Bank of Serbia, and McDonald's restaurant (opened in 1989, as the first one in Eastern Europe). The house in which the globally famous restaurant is now located was built back in 1893 for one of the wealthiest men in Belgrade, a merchant Djordje Vučo, in a neoclassical style with renaissance motifs. 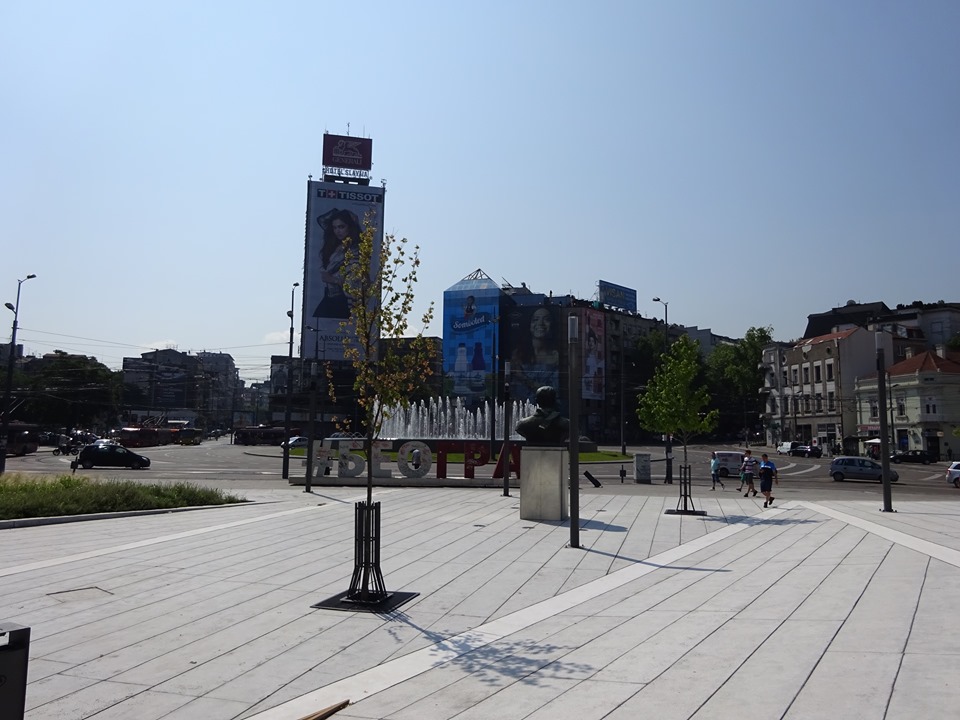 If you take Bulevar Oslobodjenja avenue (up right) you'll get to Vračar Plateau with St. Sava's Church and the National Library on the left, and Milutin Milanković park on the right. Moving along, you'll reach stadiums of FC Partizan and FC Crvena Zvezda (Red Star) in about 20-25 minutes on foot.

If you take Nemanjina street (down) you'll get to the Old Main Railway Station and Belgrade Waterfront in about 10-15 minutes on foot.

After WWII, when the communists came to power, Slavija square changed its name to Dimitrije Tucović square, honoring one of the pioneer socialist in Serbia. His monument was placed in the center of the roundabout, but nowadays, after reconstruction of the square, it was moved to the position in front of the building of the National Bank. The old name "Slavija square" was reinstalled at the beginning of this century. 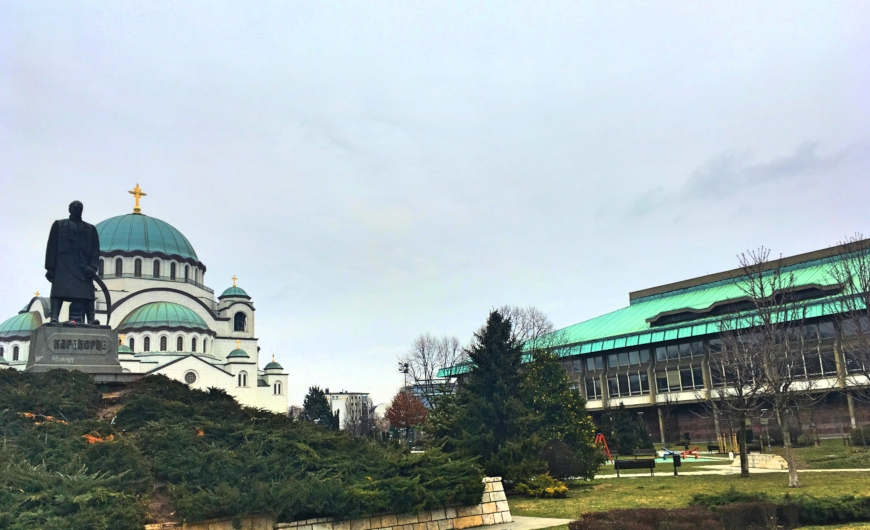 Vračar Plateau (or St. Sava's Plateau) is located in the wider center of Belgrade, in Vračar district, on the top of the hill, 134 meters above the sea level. It is the place where you can admire one of the biggest Orthodox and Christian churches in the world - St. Sava's Church.

This is the place where, according to the mainstream historians, Turkish Grand Vizier, Sinan Pasha, burned St. Sava's remains (brought from the monastery of Mileševa in southern Serbia) on April 27, 1594. However, others argue that, in fact, this event took place at today's Tašmajdan Park. Nevertheless, this served as the inspiration for Serbian people who, in loving memory of St. Sava, exactly 300 years after, in 1894, took the initiative of building a grand cathedral on the spot of the incineration.

Finally, after more than a century of constructing, in 2017, the exterior of the church (or "temple" as the Serbs call it) was finished. Now, the works are carried out inside, to complete the mosaics. 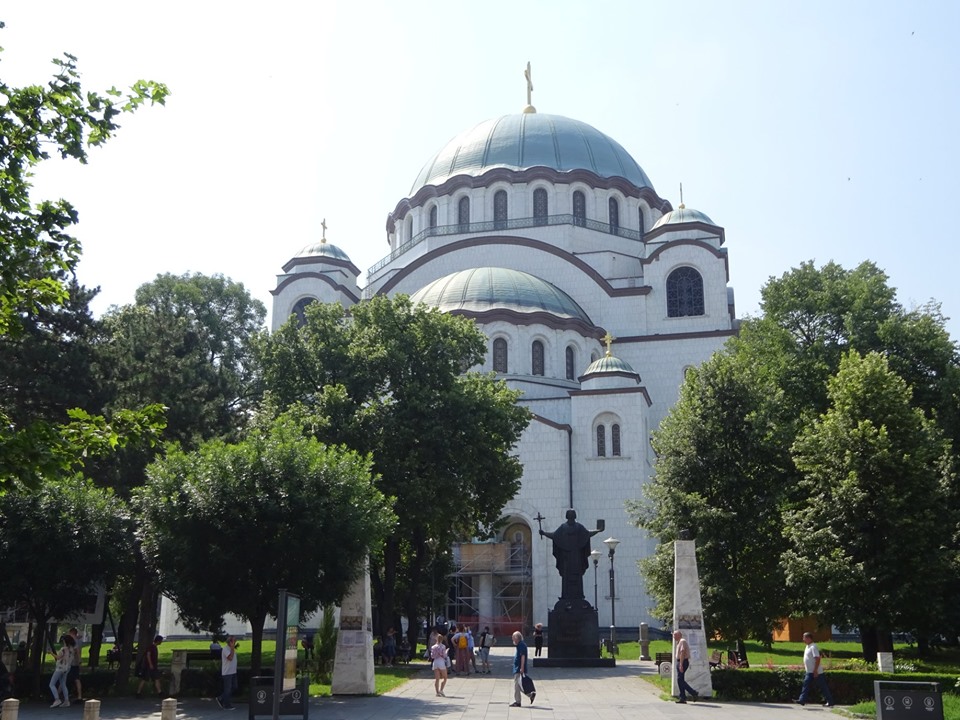 The architectural design of St.Sava's Church is comparable only to the Haghia Sophia in Istanbul and Alexander Nevsky Cathedral in Sofia, Bulgaria. it is one of the 5 largest orthodox churches in the world, and the largest one in the Balkans (South-Eastern Europe).

Beside the church, the National Library of Serbia is located on this plateau, as of 1973.

Monument to Karadjordje (eng. "Black George"), grand leader of the First Serbian Uprising against the Ottoman Turks in 1804, and symbol of Serbian struggle for freedom, is placed at the corner of Plateau. His descendants founded a royal dynasty, with Petar I Karadjordjević being the king of Serbia (1903-1918), and with Aleksandar Karadjordjević, the king of Serbs, Croats and Slovenes (1921-1929, from 1929 until his assasination in 1934 king of Yugoslavia). Prince Alexander Karadjordjević is currently heir to the Serbian throne, but nowadays Serbia is a Republic, by Constitution.

Across Bulevar Oslobodjenja avenue, there is a nice park named "Milutin Milanković Park", in hounor of the world famous Serbian mathematician, astronomer, and climatologist. His monument is placed in the center of the park, in front of the meteorological observatory.

Vračar Plateau is close to one of the main traffic points in the city - Slavija square (5 minutes on foot). It is also a couple of hundreds of meters away from the Highway (E-70/E-71/A1), if you move further along. And, on foot, if you take the overpass above the highway, you'll find yourself at the football stadiums of FC Partizan (32 000 seats) and FC Crvena Zvezda (55 000 seats), within 15-20 minutes.

The Clinical Center of Serbia, with the circle of hospitals, the ER, and the Faculty of Medicine, is positioned at the border of the Plateau covering a large area all the way to the Highway and Kneza Miloša street (approx. 1km long and 300 meters wide). 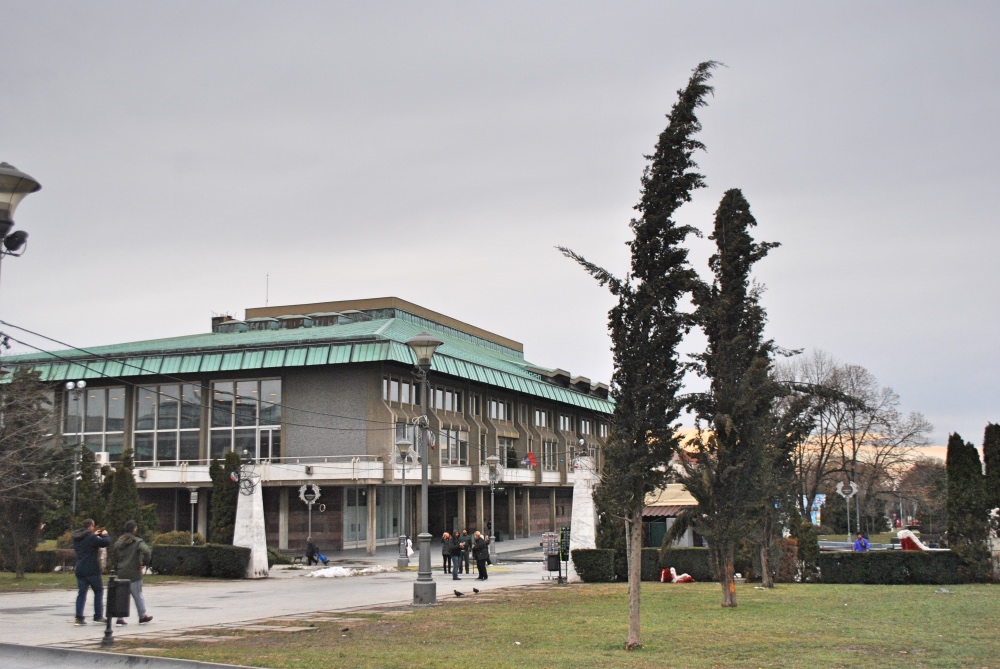 The National Library of Serbia is safeguarding the biggest, and certainly the most precious collection of written documents in the region. It is positioned on Vračar Plateau, next to St. Sava's Church.

The library itself was established back in 1832, in a local bookshop. Since its foundation, it frequently changed location, until 1973 when the modern building was constructed to house its precious collections.

The collection comprises of more than six million copies of various kinds of old, rare and contemporary books, in Serbian and other languages, then manuscripts, recording, maps, newspapers and journals. Find out more at the official web-site. 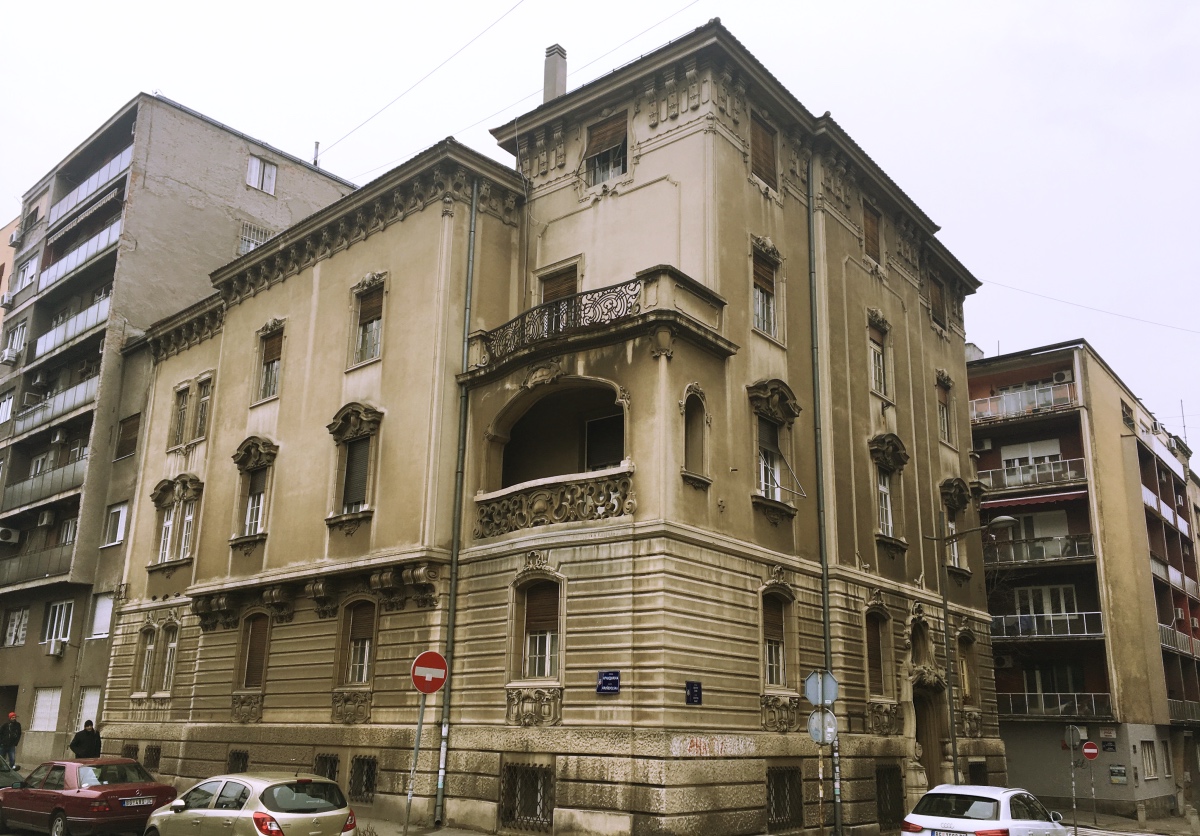 House of Nikodije and Marika Bogdanović

Facing the monumental St. Sava's church, this building is definitely worth noticing.

Some argue that this is possibly the most beautiful building in Vračar district. Others say that this house got lost in time, as it was constructed in 1933, when dominant styles in Belgrade's architecture were pretty modernistic. Nevertheless, this house is so charming, that is has to be admired up close. 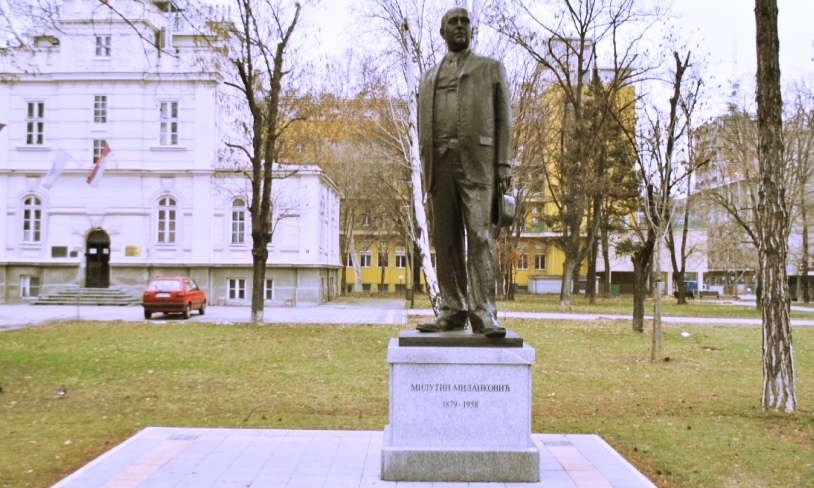 This park is located on Vračar hill, across the Church of St. Sava and the National Library of Serbia.

There is an observatory in the park, formerly astronomical and now meteorological. It was built in 1890, in the spirit of romaticism (you can see it on the photo, behind the monument to Milutin Milanković). It was pretty advanced, and even had a mobile roof. For that, the park was best suited to bear Milutin Milanković name, as he was one of the leading scientists in the field of climatology, but contributed greatly to world science in the fields of astronomy and time measuring as well.

The park is situated at the entrance to the vast Clinical Center of Serbia, so there are a lot of hospitals and medical institutions nearby. Other than that, it is close to St. Sava Church, one of the main landmarks of Belgrade, the National Library of Serbia, and Slavija square, which connects it to the narrow center of the city.

There is a statue of Milutin Milanković placed in the park. The park itself is not of great size, but it is very pleasant and gives you a very nice view on the surroundings. It is located on the Vračar hill, and in this park, in front of the observatory, in 1918, the people gathered to greet regent Alexander Karadjordjević who triumphantly marched in the city on the white horse with his victorious army from the Great War (WWI).