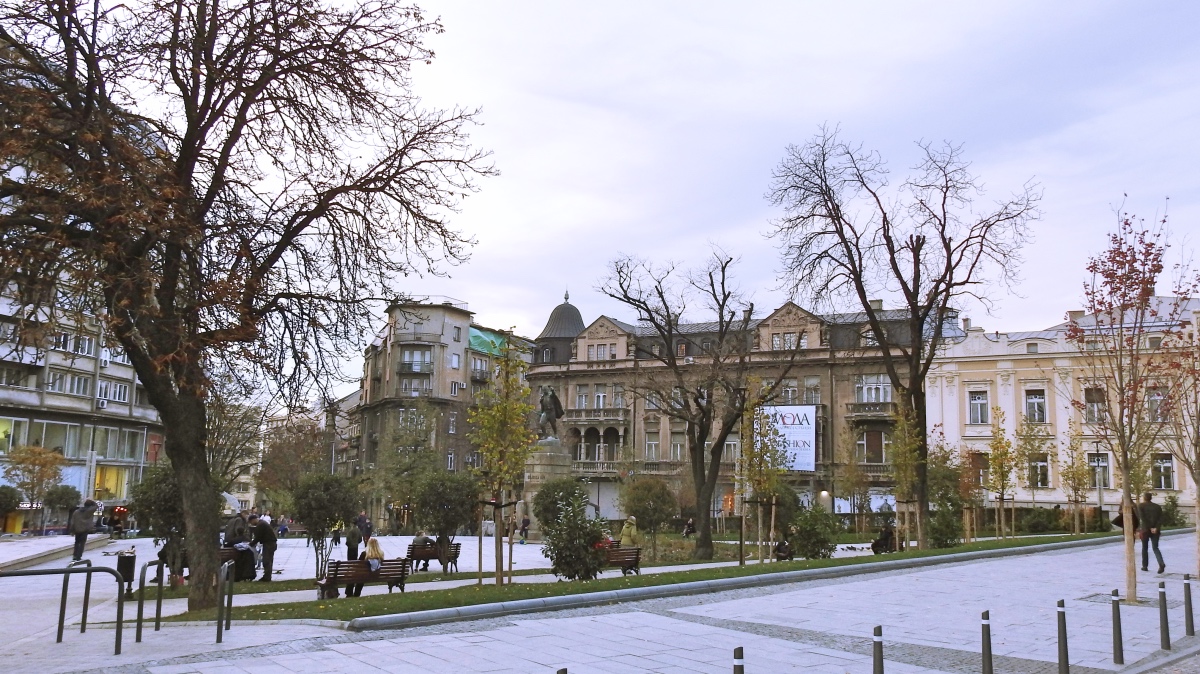 Topličin Venac is a small street and district in the heart of the old town, close to Knez Mihailova pedestrian zone. It mainly consists of a square with Vojvoda Vuk's Park in the center.

The street was named after Serbian hero from the Battle of Kosovo (1389), Milan Toplica, and it's halfway from Obilićev Venac to Kosančićev Venac district, forming almost a continuous pedestrian zone through historical part of the old town.

In the middle of it, there is a Park dedicated to Vojin Popović aka "Vojvoda Vuk" (with his monument), one of the famous and highly-decorated military commanders from the Balkan Wars and the Great War (WWI), during which he died heroically at the Battle of Kajmakčalan. In Serbian, "Vojvoda" may correspond to various types of military commander ranks. And "Vuk" is the nickname in this case, but other than that, sometimes it can be a proper first name in Serbia (and it literally means "wolf"). 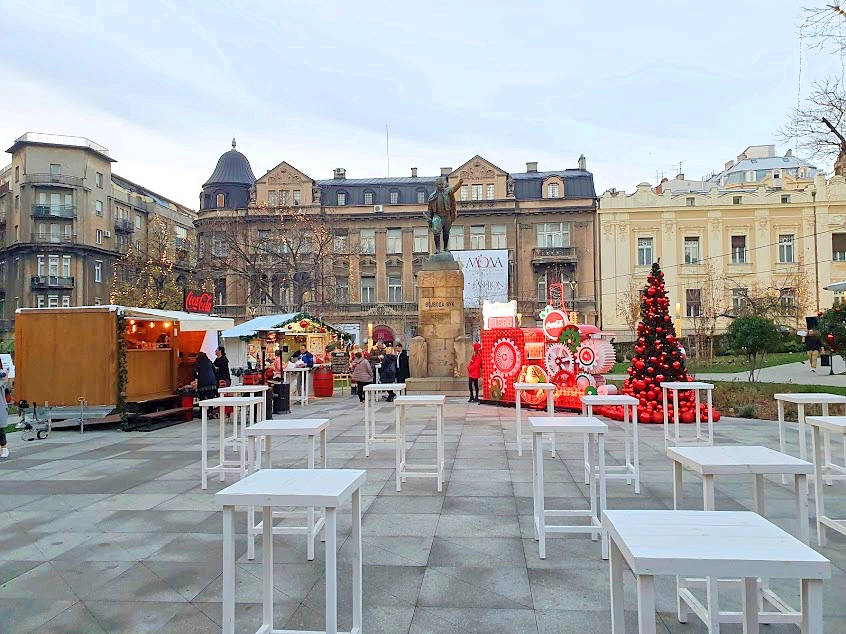 The park is actually the smallest one in the wider center of the city. The whole area, along with the park, is totally reconstructed.

The place is bordered by some of the finest architectural pieces in the city. Direction Obilićev Venac (and further down the road to Zeleni Venac), there is a monumental PRIZAD building (now TANJUG press agency), square-shaped in front and rounded on the back side. It was constructed in 1937, and it represents a fine example of modern 20th century non-ornamented totalitarian architecture. Across the street there is Papakostopoulus House, from 1907, built in a manner of academism with secession elements on the facade. 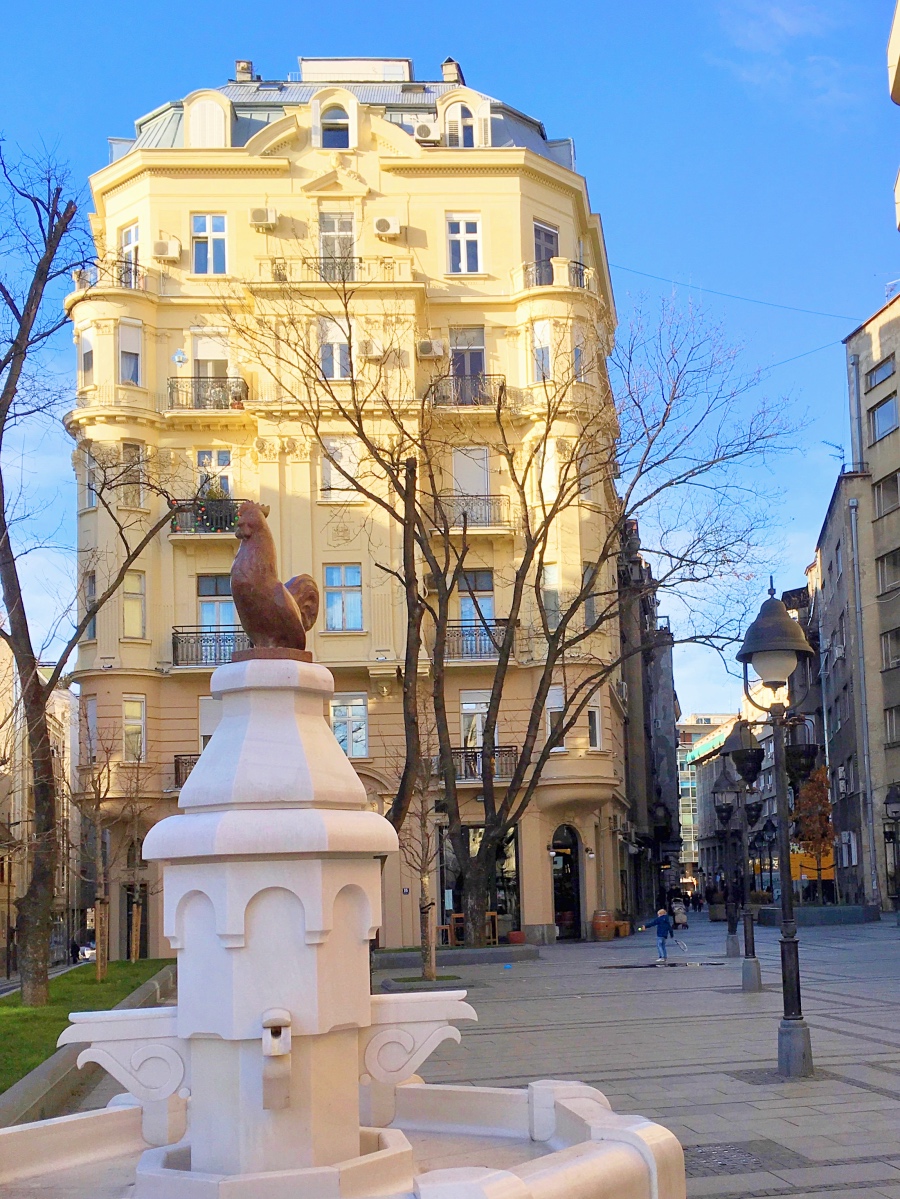 On the other side of the square, you can find the Museum of Applied Arts, next to a magnificent House of Milan Pavlović. From there, passing by a small square, commonly known as "Pevac" (eng. "The Rooster"), with a little fountain with rooster on top, you can go towards King Peter's street and Belgrade Fortress. 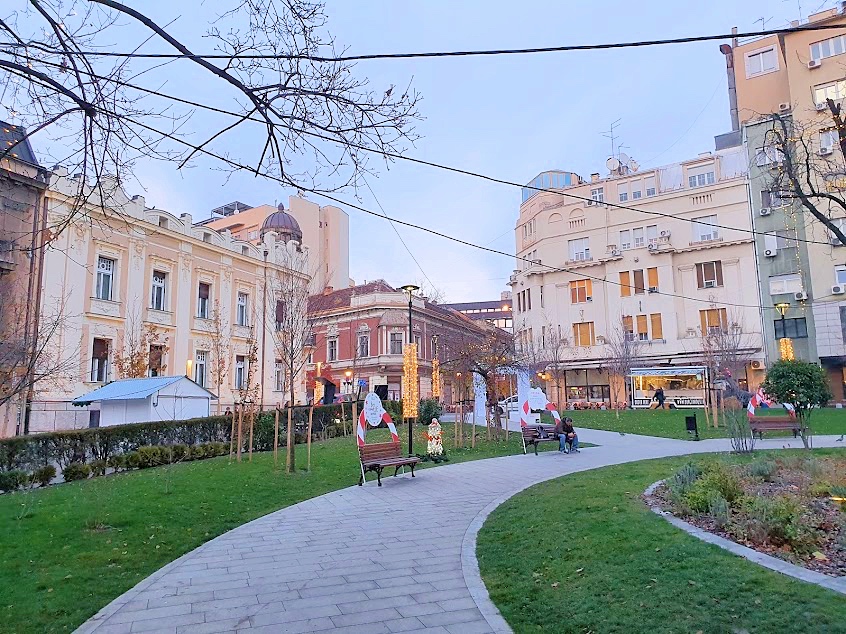 Going to the right from the Rooster square, taking Vuka Karadžića street, you'll get to Knez Mihailova st. in a couple of minutes. Going to the left, or towards the end of Vuka Karadžića street, that borders Topličin Venac, and passing by the Museum of Applied Arts, you will reach a classical Palace Hotel, built in 1923, in the architectural spirit of eclecticism (academism with elements of neo-baroque), at the time the fanciest hotel on the whole Balkan region, as some argued. From there, you can go down, direction Kosančićev Venac. 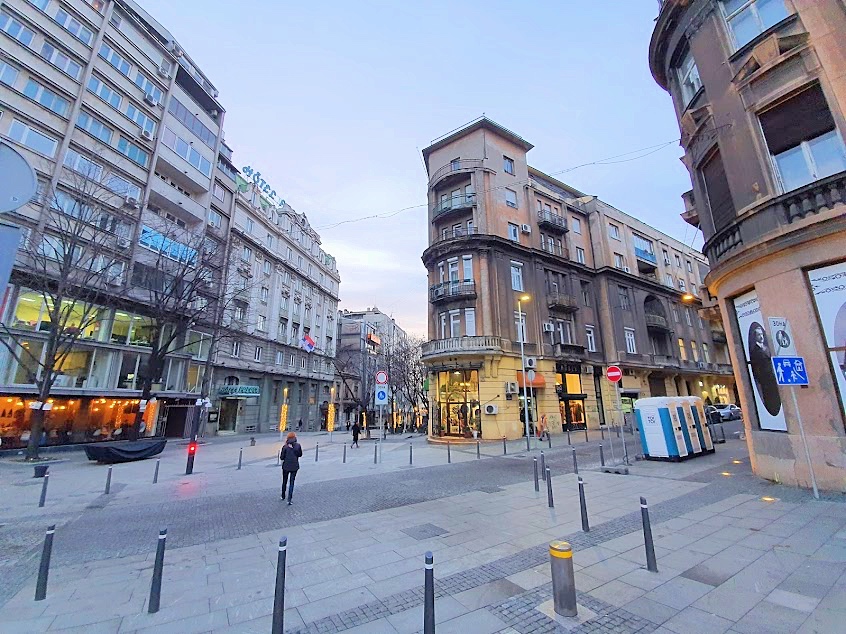 This place is very nice and it keeps the spirit of an old classy Belgrade. 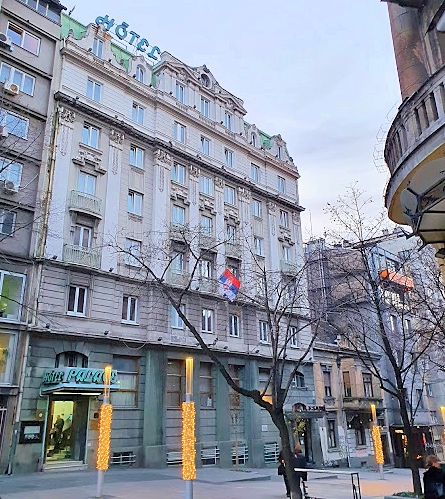 A classical 4-star hotel located in one of the nicest neighborhoods in Belgrade. This hotel was opened in 1923 and has seen a lot. Great tradition and perfect location makes it simply irresistible.

For more info visit the Official Web-Site of the hotel. 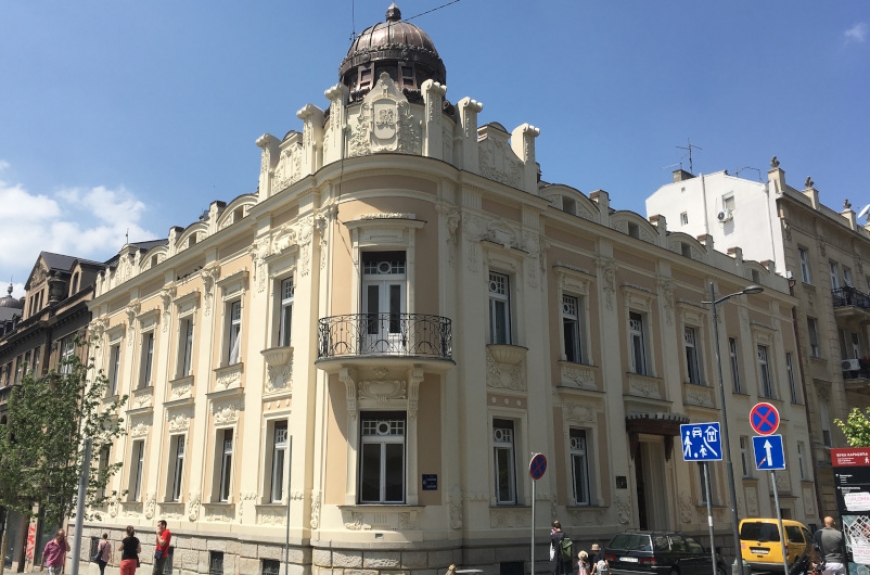 Next to the Museum of Applied Art is situated a beautiful House of Milan Pavlović, at the corner of Gračanička and Vuka Karadžića street. It is in line with another very nice example of Secession in Belgrade's architecture, Papakostopulous House, which is positioned directly at the other side of the square, across Vojvoda Vuk Park.

Milan Pavlović inherited great wealth from his father, a textile magnate. He built this house for his family in 1912, even though his father left him several buildings in the center of the city. Milan pursued politics, he was even Lord Mayor of Belgrade. After his death in 1924, his daughters sold this property. So, it became a popular Building of the Jockey Club, as the riding club "Knez Mihailo" was housed in its premises. After WWII, the Institute for Criminal and Sociological Research is located in the building. Also, one of Belgrade's popular night clubs was, and still is situated on the ground floor. 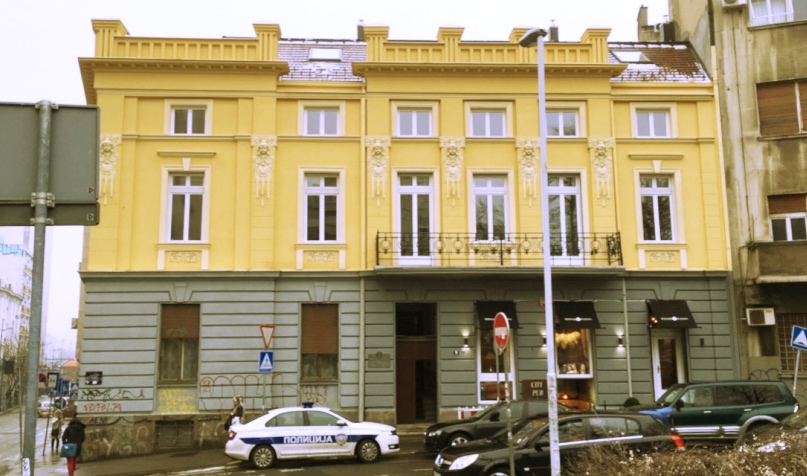 The house of respectable Dr. Papakostopoulus is located at Topličin Venac, opposite to another masterpiece of secession architecture - House of Milan Pavlović, which was built several years later.

This precious example of Academism with elements of Secession on the facade borders Topličin Venac from 1907, and is admired by passers-by ever since. 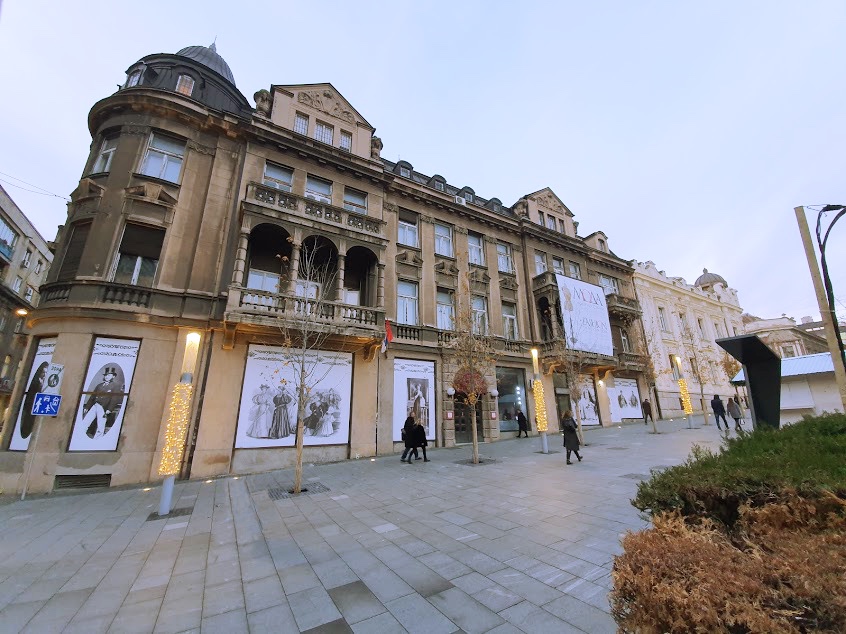 Museum of Applied Art is located at Topličin Venac, overlooking Vojvoda Vuk Park and monument. It guards a precious collection of furniture, photos, ceramics, textile and other materials used for various kinds of craftsmanship.

The museum was founded in 1950 and it guards Serbian applied arts items, but also a related material from all around the world. Originally, the building was constructed by Jakov Čelebonović, a lawyer, with the purpose of renting the appartments. Three brothers Čelebonović lived there, Jakov, Aleksa and Marko. Marko Čelebonović was one of the most famous Serbian painters of the 20th century. Their precious art collection is displayed in the museum. The building is located next to a wonderful example of secession in Belgrade's architecture - House of Milan Pavlović, and in the immediate vecinity of the classical Hotel "Palace".