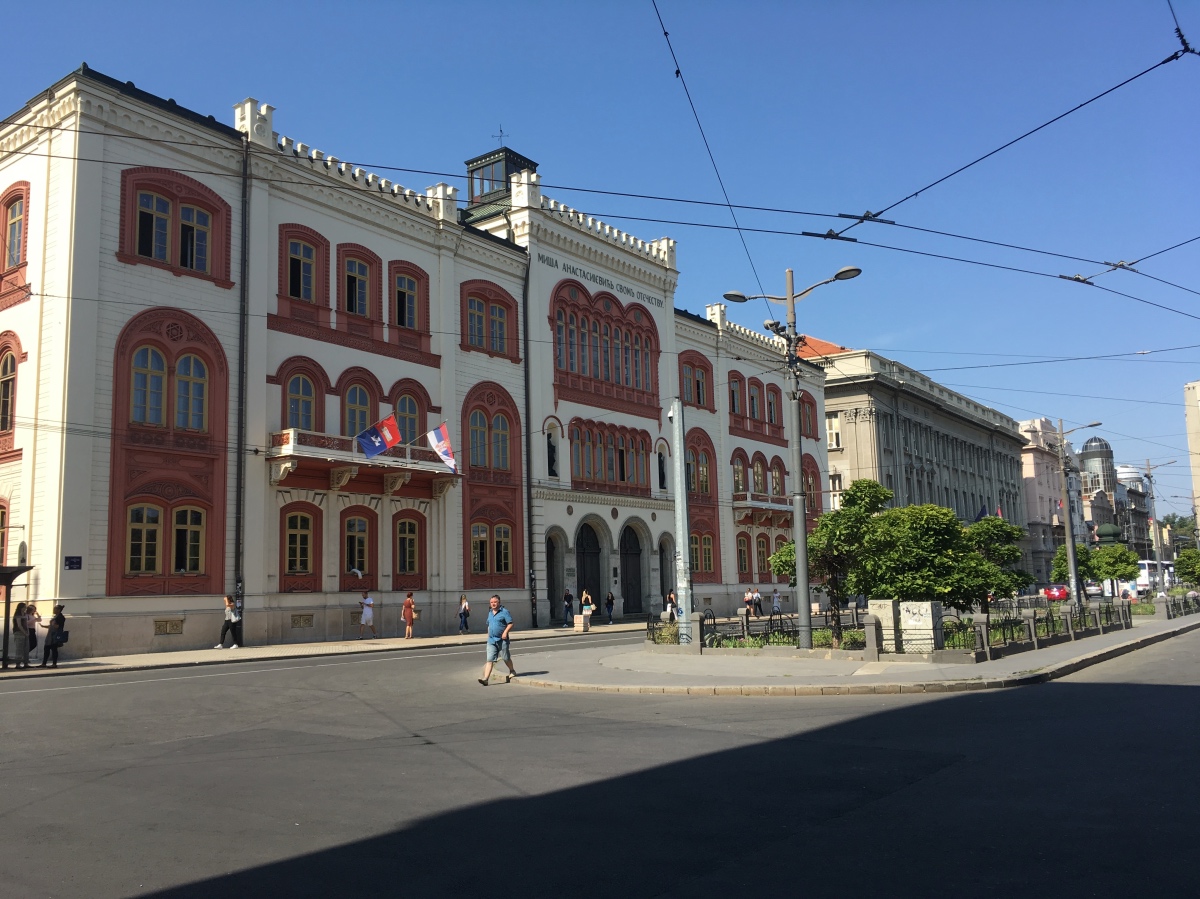 This is the oldest urban city square in Belgrade, with one of the most classical surroundings in the center of the city. It is also an academic hotspot. There is a cosy Students' Park in the middle of it, also known as the University park, in the shape of a public garden.

The square and the park are surrounded by academic insitutions of utmost importance which are occupying the plateau, such as Faculty of Philosophy, Faculty of Philology, Faculty of Mathemathics and Natural Sciences and the magnificent Captain Miša`s Edifice - the headquarters of the University of Belgrade. The central portion of the square was converted into a park in the late 19th century (1897). However, the place was shared with the so called Great Market, which was operational all the way until 1926. The Great Market was opened in the early 1820's by the authorities as the principal farmer's market in the city. And the whole place was built on the old Turkish cemetery. 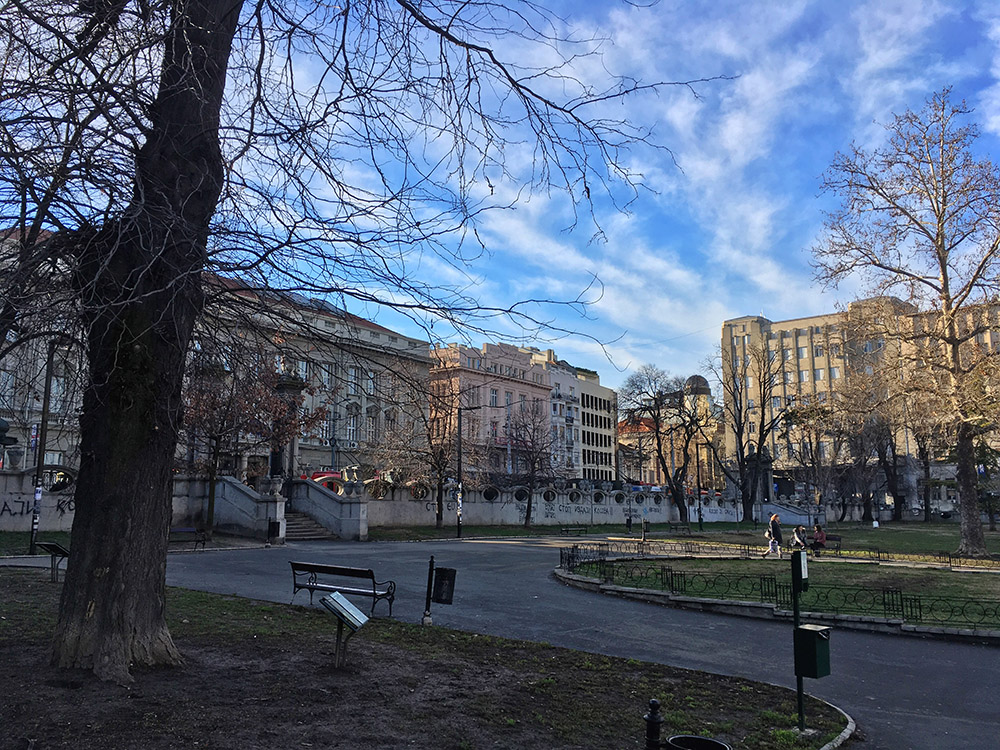 The story tells that after the construction of Captain Miša's Edifice in 1863, and the Great School in it, some people considered that it was inapropriate to have a farmer's market in front of such an important academic institution. However, only 30 years later the city authorities were persuaded to separate a portion of the Great Market and convert it into a park. When the market was finally closed, in 1926, the park got today's shape. In 1930 the concrete fence with recognizable iron gate was added. 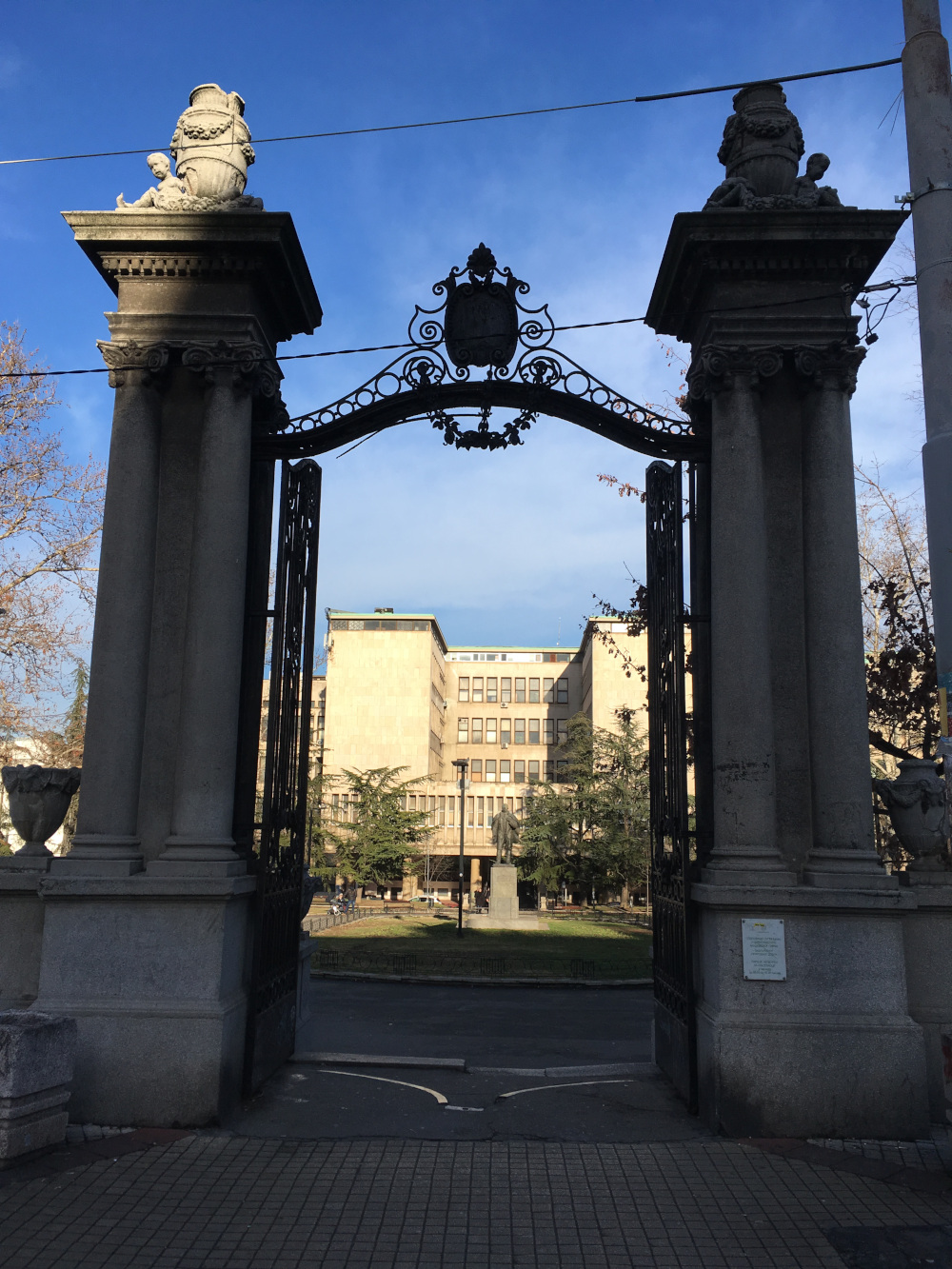 Monuments honouring three great Serbian minds and scientists are symetrically positioned in the park. The figure on the right is the one of Dositej Obradović, Serbia`s reformist, enlightener and the first Minister of Education. The statue of Jovan Cvijić, the founder of modern geography in Serbia, the president of the Serbian Academy of Arts and Sciences, and the rector of the University of Belgrade, occupies the central spot, and the monument to Josif Pančić, considered as the father of Serbian botany and the finder of many new botanical species, is positioned on the left side from the main entrance.

Other than that, Students' square hosts the Kolarac People's University, which is now predominantly used as a concert hall, and the Museum of Ethnography, which really stands out in the panorama of the plateau. 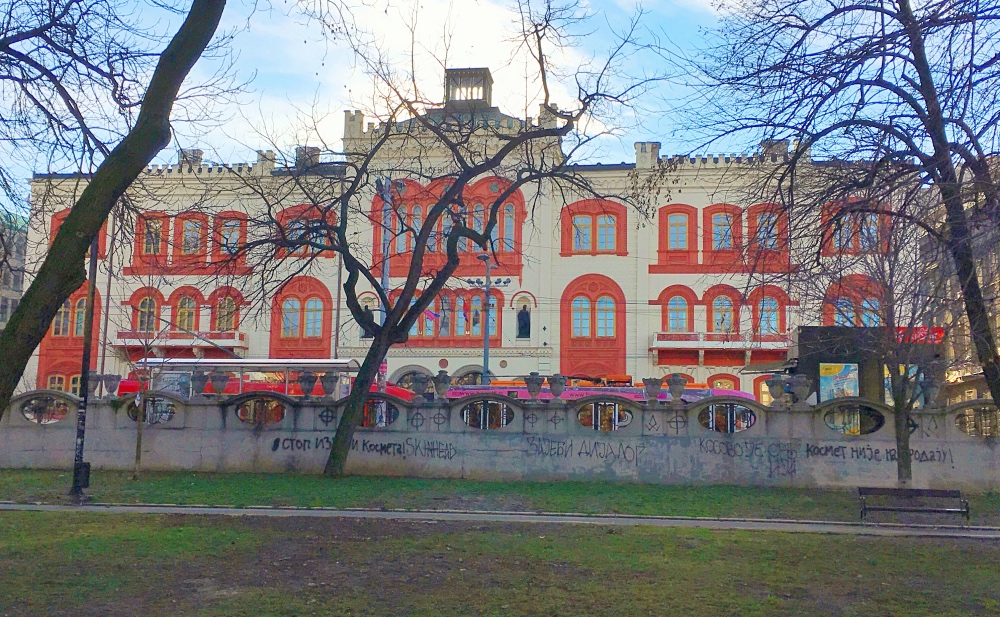 One of the oldest (built in 1863) and most representative buildings (designed in Serbo-Byzantine style with gothic and renaissance elements) in Belgrade is located at Students` square and hosts the University of Belgrade headquarters.

Captain Miša Anastasijević was a wealthy 19th century merchant, one of the richest in Serbia, and was commonly known as the Captain of Danube. He gave this exeptional building to the authorities for educational purposes, as a part of his legacy. Now, it houses the headquarters of Belgrade University. At the time when it was built, it was the most impressive structure in the city. Even nowadays, it remained one of the most beautiful buildings. It is declared as a cultural monument of exceptional importance. It is surrounded by academic institutions - the Faculty of Philosophy, and the Faculty of Philology. Across the Students' Park it overlooks the Faculty of Mathematics and Chemistry. 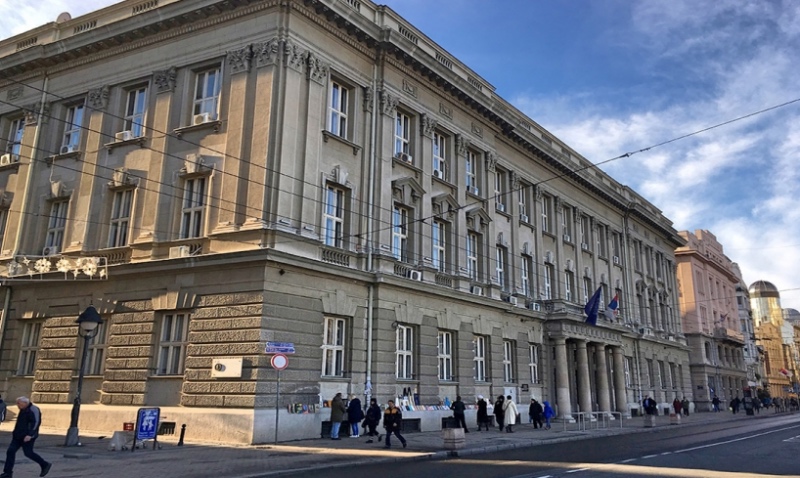 Building of the Faculty of Philology (dating from 1922, designed in the spirit of Academism) is located at Students` square between two great edifices - one of the University of Belgrade and the other of Ilija M. Kolarac Foundation. The three are making perfect surrounding for the oldest urban square in Belgrade. 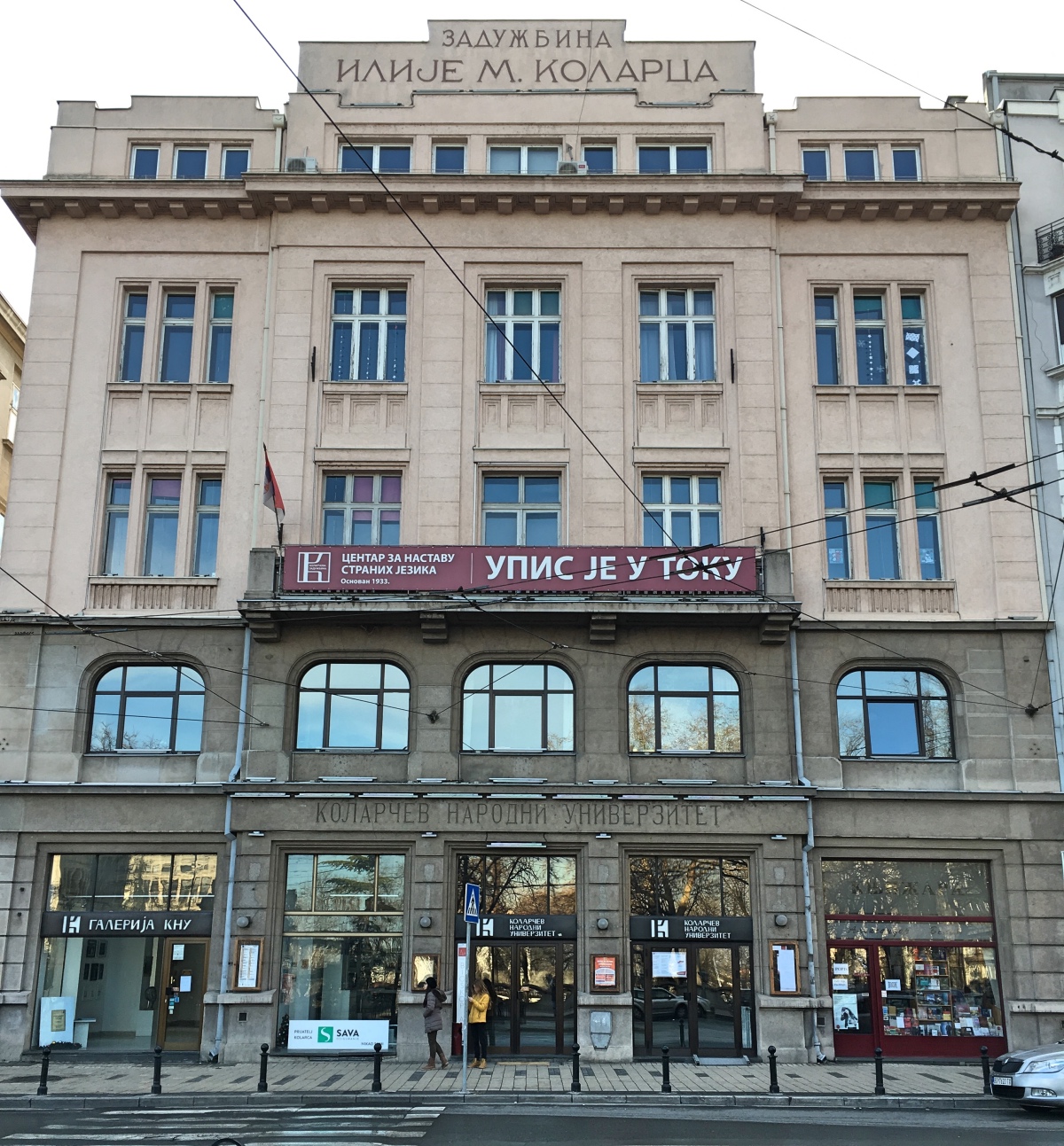 The building of the People`s University of Ilija M. Kolarac is yet another one of the precious cultural and educational centers you can find at Students`square. It is used nowadays mainly as a concert hall, but also for the lectures and various types of educational or promotional seminars.

Ilija M. Kolarac earned his wealth being a very skillful merchant. He owned houses in the center of the city, a tavern in today's Republic Square (former Prince's Square) and various kinds of estates. When his wife died, he founded a literary fund giving it his proper name of "Ilija M. Kolarac". As he had no children, by his own will, he left everything to the Serbian people. He demanded that, from his wealth, the authorities should build a university. However, some of his relatives tried to dispute his will. Because of it, the edifice of Kolarac People's University was built more than 50 years after his death (died in 1878). So, finally, the building was completed in 1932, in a fashion of architectural Academism. 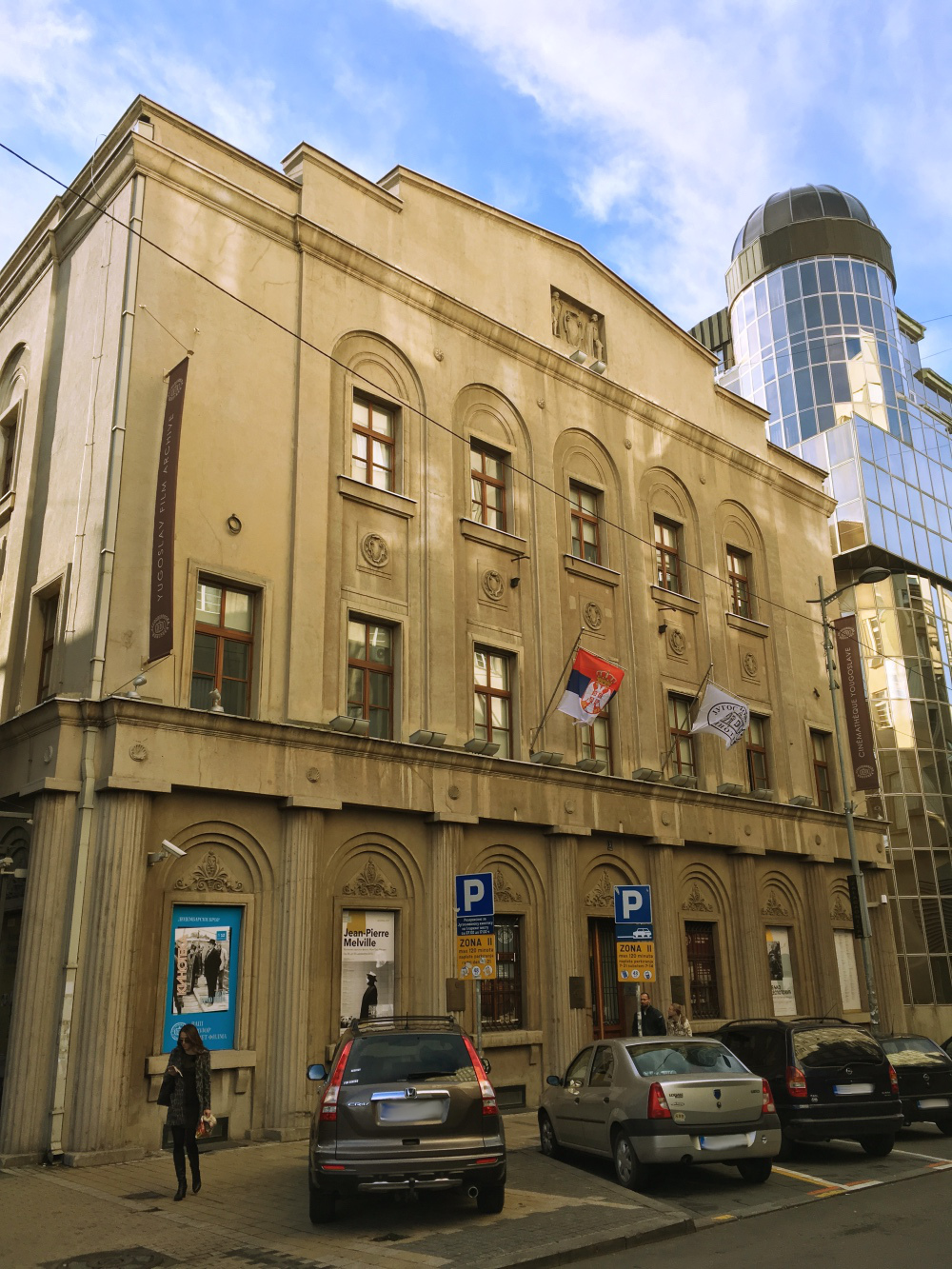 Old Belgrade Town Hall (1869-1964), now building of the Film Archive, is one of the oldest edifices in Belgrade. It was built in 1846, and designed in the spirit of Classicism with elements of Romanticism.

This building was not originally planned for the Town Hall, but it served that purpose for almost a century. It was constructed as a Residence of Aleksandar Karadjordjević, Serbian Prince (1842-1858), son of Karadjordje (eng. "Black George"), the leader of the First Serbian Uprising against the Ottoman Turks. The tavern called "Serbian Crown" was located there before the place was elected to be the headquarters of Belgrade municipality. Since 1996, is is the home of the famous Yugoslav Film Archive and its museum.

Serbian (old Yugoslav) Film Archive is one of the most respectable institutions of such kind in Europe. It guards a collection of 95 000 films, the library with 20 000 books, and more than 200 000 newspapers collected from 1948 until present day. It is considered to be among Top 10 Cinematography Museums in the world. 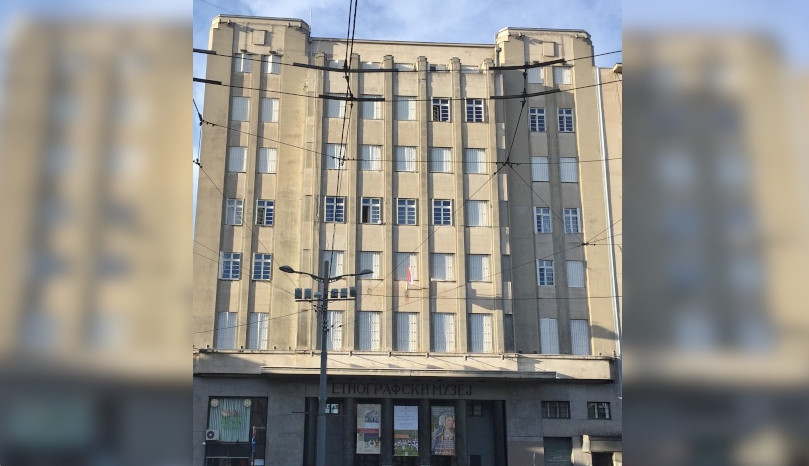 The Museum of Ethnography is one of the oldest institutions of such kind in Serbia. It was founded in 1901, and moved to present location at Students square in 1951. The building itself was constructed for the stock exchange before WWII. With its robust modern looks it really stands out in a classical surroundings of the Students square.

The museum displays folk culture artefacts of various kinds, such as pieces from the household, jewlery, national costumes, old photos, ritual objects and so on. Manak's House museum also forms part of its dominion.